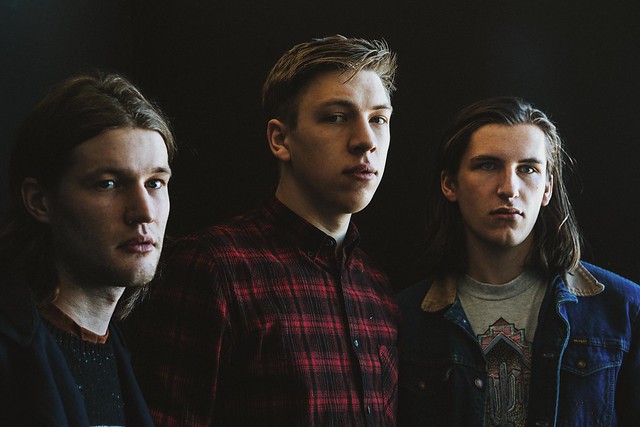 Watch Drenge perform “We Can Do What We Want” during Bestival 2015 in September 2015:

Rory practically enters a trance once he starts pounding away on his guitar, occasionally rolling his head in a serpentine manner. The head roll says a little bit of “piss off” and a little bit of “well, I might be possessed.”

The “headbanger” move emerges particularly during Drenge’s harder stuff, like “I Want to Break You in Half” from the band’s self-titled debut album, released only two years ago. It’s a little darker and a little heavier, and Rory and Eoin seem to slip into a different frame of mind when they play it. One observer said the song gave off a whiff of The Misfits.

Watch Drenge perform “I Want to Break You in Half” at Victoria Warehouse, on Manchester, UK, for the 6 Music Festival on Feb. 28, 2014:

That said, Drenge seem to have matured a bit thematically on the new album, giving thought to freedom and life and speaking more intellectually in metaphor and allegory. Take single “Running Wild,” for example, which Drenge played at the end of their set at U Hall.

“Running Wild” as a term is used allegorically as racing through life, dashing from one point to another until you’ve raced away from things like “London’s husk of burnt out rust.”

The music video for “Running Wild” reinforces the idea that the Brothers Loveless have deeper things on their minds with their second album. The contemplative video, wistfully composed, presents “a portrait of the Richardson family” on “Throwley Farm, Derbyshire,” where family members are interviewed in snippets throughout the video. Their brief interviews intertwine with cinematic shots of their land, and you are given a sense of connection between people and land, life and death.

To my ear, Rory adds to the power of the song by bringing his best Ian Curtis impression to the table.

Drenge continue their tour tonight in Minneapolis and play some more dates with Wolf Alice through next week, closing their US tour on Oct. 15 in Chicago. The band is pretty darn good, and they make a strong double-bill with Wolf Alice, and so I highly recommend checking them out. You’ll certainly get your money’s worth with a powerful dose of English youth “running wild” with Drenge alone!