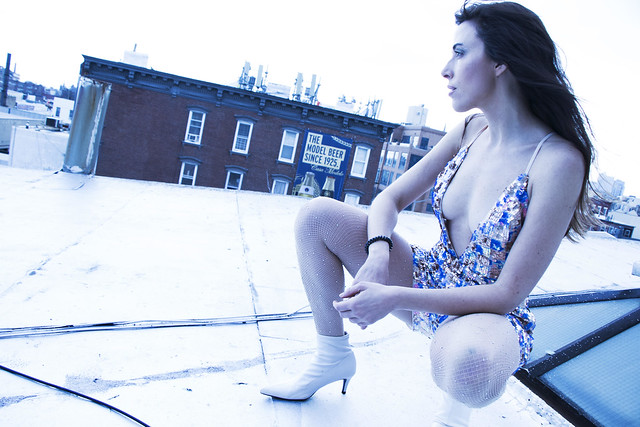 DC synthpop band Loi Loi is a local favorite here at Parklife DC, and we are excited that frontwoman Kristie Di Lascio is releasing Me Dystopia, the first full-length album by Loi Loi, via Blight Records — today, Feb. 15!

In honor of the occasion, Parklife DC chatted with Kristie about how she made the record, what it means to her, and what’s next for Loi Loi. After you read our interview with Kristie, buy Me Dystopia on Bandcamp and grab a ticket for the record release show at Comet Ping Pong on Saturday, March 16.

This interview has been edited for length and clarity.

Mickey McCarter: You’ve got a full-length album coming out – congratulations! Tell us what it’s about?

Kristie Di Lascio: This album is a take-off from the first EP, Viva la Vulva. In that EP, we dove deep into themes of what was happening in terms of people’s rights, women’s rights; we were experimenting with electronic sounds, Electribe sounds. For this album, we took what we had, that basis of the Electribe sound, and we worked really exclusively with other musicians to take those patterns, to take those melodies, and to amplify them, using different lenses of electronic options to really make it more industrial sounding, a little harder, a little edgier. So, this is an edgier album than the last one.

MM: When I listen to the EP, I get this burst of energy. The energy is still there on the new songs, but they seem more methodical to me perhaps?

KD: Yeah. Absolutely. For the new album, a song was written. It took say a month to write it, and I’d reshape the lyrics. I rewrote the lyrics many, many times; I changed the melody over and over. I tried to really develop a distinct, a longer verse and chorus pattern. Whereas on the EP, I was trying to get that punch — that two-minute song punch where you listen to it and you’re like, “Ah!” It’s like a fresh hit to the mouth.

For this album, it not only was an adventure, and I wrote all of these songs on my own this time. I didn’t co-write with anyone, so I had a lot of room to actually change stuff and there was no time pressure. When the other albums that we did came out, and because I was working with other people and their time schedules, we had to finish things quick, but I didn’t feel that pressure with this album.

Stream Me Dystopia by Loi Loi on Bandcamp:

MM: Yeah, were you pretty hands on for the production of the album?

KD: Yeah, absolutely. It would take a day to lay down a track, all of the parts, the drum machines. And there would be eight or nine pieces there, so eight or nine different drum tracks, and then we’d have the key tracks, maybe two or three different keyboards. I have my Nord, but I was borrowing and using other keyboards too. The vocals for some of the tracks are very layered, and there’s multiple harmonies. We did not use auto tune for that! If I opened up a song, there would be 15 different parts and that would be one day’s work.

Watch the official music video for “Sliver Light” by Loi Loi on YouTube:

MM: There’s a lot of international flavor to the songs that you’ve recorded and clearly there’s a reason for that. You’ve lived in many different places, so you’ve taken some influences or some keys from those places. That just flows out of you, I think? It’s not a deliberative matter.

KD: I would say definitely the places that I’ve been impact my songwriting and they impact my thinking and my experience. For a song like “Egipto,” the lyrics are about how the world is influenced by events and the culture of Egypt — and how important everything that happens in Egypt is so important because they are the center of our civilization and how we think and everything we do is really influenced.

MM: That song also has a lesson, correct? “Be careful what you wish for?”

KD: When we made the music video, it came out so differently from what I envisioned in the song, but then there was that correlation of recognizing roots outside of you that pull you in. They’re not necessarily your roots, or you don’t think of them as your roots, but they’re roots and rules of this world and they pull everything in. They force you to reckon how we are really unified by some of these common places, experiences, and culture.

So, the alchemy theme of the video made me think about things. Well, we all think we’re in charge of our own lives, and we’re just doing what we feel like doing, but there are outside forces of nature that pull us in and bring us back to the center. And we can’t deny they are there. It makes me think of Egypt in that same way.

MM: Right, right. It’s a beautifully shot video, and the concept was very clever and simple.

KD: Thank you. I worked with Jen Meller on that video. We say we’re going to make a video, and I have a couple of ideas, and then we sit there and hammer it out. We come up with a storyline, and we do storybooking. She’s amazing! The videos are the most methodical part of music making. Whereas the music, as you alluded to, just flows from experience and culture.

Watch the official music video for “Egipto” by Loi Loi on YouTube:

MM: Are there others songs on the album that are so personal to you? Can you tell us a bit about them, too?

KD: Yes. “Me Dystopia” is the title track of the album. It’s at the end. I wrote for this lyric: “I’m lucky to say I was a victim of this life.”

I had some hard experiences when I was living overseas. I came back to the United States in 2016, and I had a chance to just take a deep breath and let it all out to understand what had happened. Speaking the languages that I was speaking, Chinese and Spanish, and then trying to live life by the rules of that culture and having my own experiences, good and bad, it was a lot of stuff in my mind. You can’t really release that until you come back to your own country. Although Viva La Vulva was the first album that I wrote when I came back, this album is more true to all the things that I was able to process when I came home.

This was much more personal to me because I was going through a breakup, and I felt this pull of guilt but also this pull of feeling that things had gone wrong. But I need to be who I am, and I need to be unapologetic about it. Even with the title of the album, Me Dystopia, I was going through this very strange rebirthing through the experiences of the last five years — living overseas, coming back, and juxtaposing that on top of what’s happening now, the politics of the world. It all felt like a very weird dystopian novel. I wanted to wrap my mind around it so I wrote an album.

There’s so much going on right now in the world; these are not bland times at all. It’s really important that we make some kind of a stand or a statement to keep a grip on what’s important here and how we can move forward. Moving forward is how we survive, and I wanted to use this album this time as a way to take both a time in my life that was more difficult and a time in my life where the outside circumstances were difficult, but I was really good with myself and other people.

MM: So here’s a pair of questions that I’m sure you get all the time. One, when you make music are there other artists that influence you, and you hold yourself to that standard? Two, when you’re just enjoying yourself, what do you listen to? That might be two different things; it might be the same thing.

KD: My number one influence of all time is Queen, especially the composition, the musicality, the lightness, the kinetic! All the parts — the way they’re all played, Freddie Mercury’s vocals, the amazing layered harmonies — that’s something that I have always tried to put into my own music. For me, this album has gone in the direction of focusing on the different layers to come up with one cohesive awesome punch of a sound.

Today, there’s St. Vincent. I think she’s amazing. I look up to her performances. And Kylie Minogue!

KD: I know, she’s a genius. She’s definitely a genius at the performance art. A big part of music for me is performance. I’m really into industrial music. KMFDM is a favorite of mine, and one of the tracks that we have on there was remixed by a friend who’s in the band now. It’s on the Bandcamp site, and it’s called “Don´t Know” (Andee Blacksugar Remix).

MM: Loi Loi’s lineup has shifted occasionally. Who will people see in the band when they catch you in the future?

KD: Ron [Storhaug] and I are the permanent members. And Maryjo Mattea plays with us also. Sometimes with her schedule, it’s hard for her to do every single show, so sometimes we have Matt Dowling, and we’ve had a few other people step in.

Ron and I, we click musically, and we’re working on an EP right now. I know, we’re putting out an album now, but we’re also trying to put out something else later toward the summer.

MM: Will that be a Loi Loi project?

KD: Yes, it will be. Ron and I are writing this together — no other side projects, just this one.

KD: I was thinking about what’s that cohesive element of it, what pulls it all together, and I was thinking about the title, Me Dystopia, and the whole idea of a dystopia within yourself. You’re trying to navigate this world, and you’re not sure what’s going to happen, and it’s all very familiar but unfamiliar — it’s scary. You don’t know if you’re in control, maybe sometimes you feel like you’re in control and other times you don’t. So, each track is like a little bunker in that hive of a story.