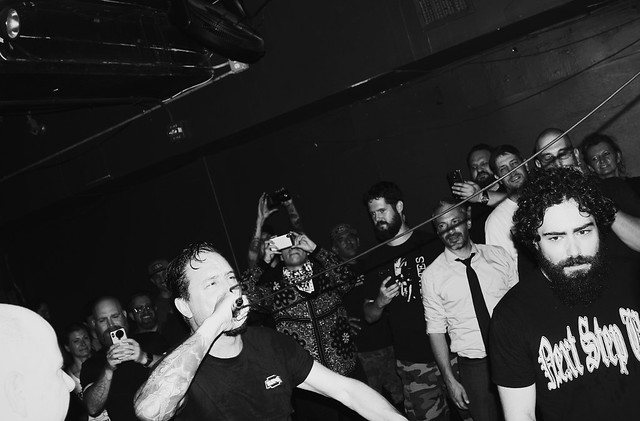 Sick of It All performs at Rock and Roll Hotel on June 6, 2019. (Photo by Jamie Langley)

Recently gracing DC, New York hardcore legends Sick of It All performed at the Rock and Roll Hotel. Upon entering the venue, you could sense the excitement of the day-one fans that filled out the dimly lit room. Sporting leagues of tattoos on their arms, necks, and legs dressed in hardcore shirts left and right, you could tell these fans were meant to be here.

Brothers Lou and Pete Koller, who have fronted the band since its very start in 1986 could be seen walking to-and-fro across the stage on June 6, Pete occasionally jumping mid-air with his ASG signature guitar. Lou connected with the crowd on an interpersonal level, about mid-set, he got down from the stage and joined the crowd, performing in the midst of a rushing circle pit, which he of course initiated. Throughout the night, lifelong fans emitted lyrics when given the chance of the mic.

Sick of It All played songs from their ever-beloved Blood, Sweat & No Tears (1989), and fans reveled in the live performance, which certainly wasn’t the first time they’d seen it all take off in a live setting. Listening to such legends play these songs live was awesome to behold and I will hold onto this memory for a long time afterwards. It is nice to see that some great things never die.

Stream Blood, Sweat & No Tears by Sick of It All on Spotify:

The band found their popularity to be rising between the years of 1993-1997, which continued to grow and hasn’t reached a stopping point yet. With support and musical collaboration of member(s) of classic Agnostic Front, Straight Ahead, Youth of Today and Rest in Pieces, it was clear that Sick of It All had no plans on stopping their rise to NYHC (New York Hardcore) stardom.

You can catch them soon in Europe playing amazing festivals such as Knotfest (FR) and Graspop (BE) alongside powerhouse acts like Slipknot, Amon Amarth, Behemoth, Ministry, and Rob Zombie, to name just a few.

Here are some pictures of Sick of It All performing at Rock and Roll Hotel on June 6, 2019. All photos copyright and courtesy of Jamie Langley.