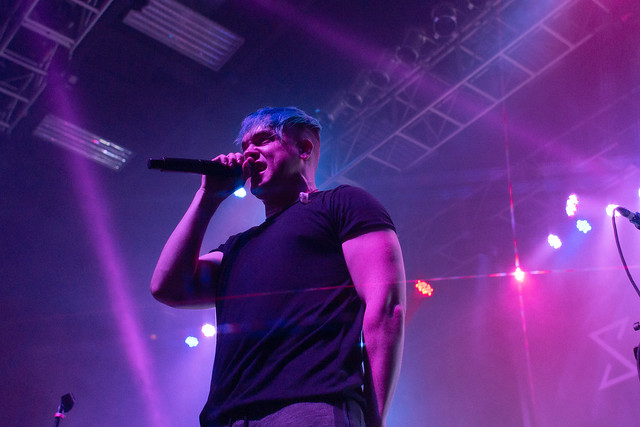 Set It Off performs at The Fillmore Silver Spring on July 6, 2019. (Photo by Angel Kim)

Midnight is the name of Set It Off’s newest album, released on Feb. 1 this year. Currently consisting of singer Cody Carson, guitarist Zach DeWall, and drummer Maxx Danziger, the band headlined at The Fillmore Silver Spring on July 6 with support from Emarosa, Broadside, and Selfish Things. 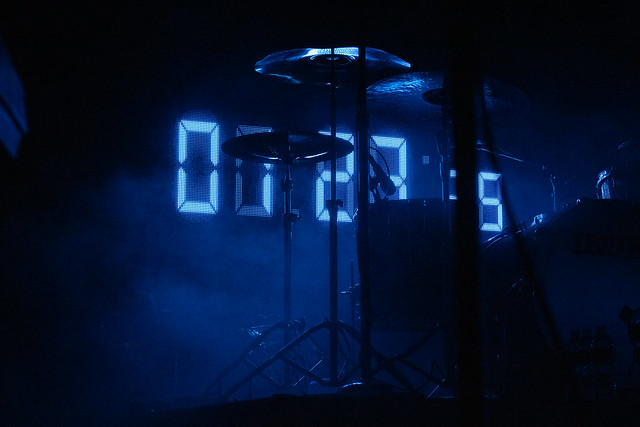 For a long time I felt that something that sets Set It Off apart is that their music almost has a palpable sense of urgency, which is why I was excited to see time as a lyrical theme on Midnight. The band’s logo for the album is an hourglass and there’s also a track called “Hourglass,” about the value of time. Lyrics in the chorus go, “I’m falling through the hourglass… Victim to the sands of time.”

Watch the official music video for “Hourglass” by Set It Off on YouTube:

The first three songs that Set It Off played were from their three most recent albums, Midnight, Upside Down, and Duality. They opened with “Lonely Dance” from Midnight, a song whose lyrics definitely established a recurring theme that the band talked about throughout the show — that “we are all going through shit right now but we can unite in the fact that we are going through it,” as Cody stated. The statement that everyone is “going through shit” is vague enough to include anyone who has had negative experiences, but the passion he put into talking to the audience made the message very real.

Cody and Maxx switched roles for “Bad Guy,” with Cody on the drums and Maxx on the ukulele and sang. Later in the show, Maxx also played a drum solo to a number of songs from the mid-2000s to the present. The medley included “Blow” by Kesha, “Old Town Road” by Lil Nas X, and even the Mii channel theme song, creating the ultimate dance party for late Millennials and Gen-Zers who grew up on teen pop and memes.

Introducing “Unopened Windows,” Cody explained that the two songs he wrote about his father’s passing away due to cancer, “Unopened Windows” and “Dad’s Song,” both include the tune to the traditional song “Danny Boy.” While “Danny Boy” is about a father telling his son leaving for war that he may not be alive when he returns, Cody experienced something similar with going to college and his own father passing away. As the band’s performance of “Unopened Windows” ended, he played that tune on the clarinet, paying homage to his father.

Near the end of the main set, the band played “Why Worry,” one of their most popular songs, where the audience put their hands in the air during the chorus like the band does in the song’s music video. Then, there were two encore songs, first Cody played “You Are Loved,” an acoustic song that was originally released as a demo on Set It Off’s debut album Cinematics. It was a quieter moment, and the song’s uplifting theme brought about some ~wholesome~ moments — I saw a group of full-grown men dance in a circle together. For the final song, the rest of the band came back out to play “Wolf in Sheep’s Clothing,” a sure way to end a show with a bang.

Watch the official music video for “Why Worry” by Set It Off on YouTube:

Here are some photos of Set It Off performing at The Fillmore Silver Spring on July 6, 2019. All images copyright by and courtesy of Angel Kim.