by Angel K
in Live Review
0 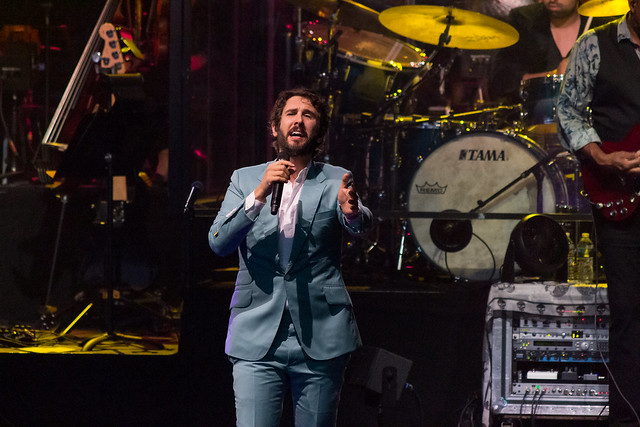 Even though Josh is known for his critically acclaimed music ranging in genres from classical to pop rock, seeing him live also introduces you to his great sense of humor. After opening the show with Bridges’s “Bigger Than Us” and then taking it back to Awake’s “You Are Loved (Don’t Give Up),” Josh chatted with the audience on July 7. He and his band had flown in from England “five minutes ago” after performing at Hyde Park with “our queen,” pausing before adding, “queen Celine Dion.”

The temperature was in the upper 80s and humid, and Josh joked about the heat throughout the show. He held up an on-stage fan towards the crowd, and then turned it towards his band members. Toward the end of the night, he talked about feeling pressured to cover Top 40-level hits, mispronouncing Ed Sheeran’s name and adding, “I think the heat stroke has finally gotten to me.” Josh’s conversational way of interacting with the crowd made his show feel welcoming and accessible.

On a more serious note, Josh also discussed his background — his journey from singing with Celine Dion as a teenager to writing songs for Bridges during his time on Broadway. Introducing “Granted,” he recalled getting discovered as he was beginning to study theatre at Carnegie Mellon University. He made the choice to pursue his career — what he truly wanted — and the song’s lyrics urge listeners to do the same. Another recurring theme that night was how social media often presents fabricated versions of people that only show the good in their lives. “River” is inspired by how on the flip side, social media also enables people to discuss topics like mental health with others going through similar experiences.

As the first instrumental notes to “You Raise Me Up” began to play, the crowd’s anticipation was visible — some people cheered as others took out their phones to record it. The Secret Garden cover is Josh’s most recognizable work, after all, which he explained that he first heard in a cab in Dublin, and forgot about until he was recording his sophomore record, Closer. When the song’s chorus hit, Josh and the choir on stage were backed by the audience members’ voices.

After “You Raise Me Up,” Josh exited the stage and came back out for an encore. He followed the emotional performance with humor, saying “Wolf Trap, you’ve trapped me.” He closed out the show with two more songs, “To Where You Are” and a cover of Simon & Garfunkel’s “Bridge Over Troubled Water,” the latter which appropriately appears in Bridges. Before playing it, Josh said that in today’s divided world, he was privileged to have a job that brings people together. As he sang the first verse, “I’m on your side when times get rough / And friends just can’t be found / Like a bridge over troubled water,” that message rang true.

Here are some pictures of Josh Groban performing at Wolf Trap on July 7, 2019. All photos copyright and courtesy of Angel Kim.