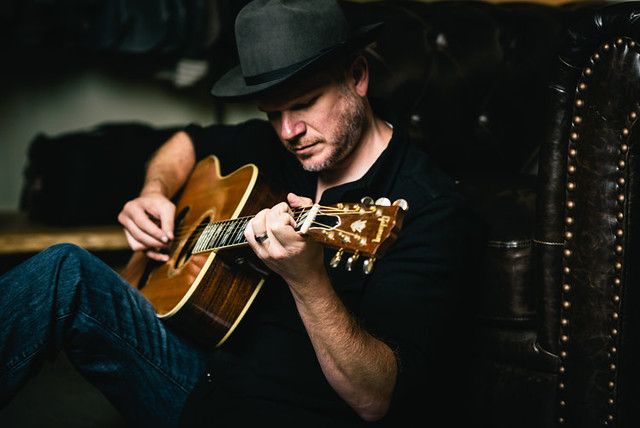 Married country traditionalists Jason Eady and Courtney Patton made a stop at City Winery recently to entertain with songs and stories. Jason has made a point of coming to DC for the last several years, as his daughter will graduate from American University this year. Jason pointed her out at the merchandise table, where she was helping out. She didn’t even appear embarrassed when Jason played a song he’d written for her when she was graduating high school!

Although her daughter wasn’t at the show, that didn’t stop Courtney from singing a song she’d written for her on Sept. 23. At a gathering around a bonfire, Courtney’s daughter made a remark to the effect that they should be careful dancing around “An Open Flame.”

With Jason providing harmony, Courtney started out the pair’s set with her song “Round Mountain,” the tale of a “baby raising raising babies” who was “married much too young.” On his turn, Jason played the road song “I Lost My Mind in Carolina,” from last year’s album I Travel On.

Stream I Travel On by Jason Easy on Spotify:

Courtney’s been playing a new song on this tour. She wrote it after a lightning storm, inspired by the sight of a double rainbow. Jason followed that with one he wrote for Courtney, when he was interested in exploring a woman’s point of view. He said that he just changed it up a little to reflect the point of a view of a man who was hearing the message from the woman in the original version.

Courtney wrote “The Road to You” with Micky Braun of Micky and the Motorcars. The song references Boise, in Micky’s native Idaho, as well as Courtney and Jason’s native (and Micky’s adopted home) Texas.

Those familiar with Mark Twain may recognize the title of “Calaveras County” from a famous story about a celebrated jumping frog. Despite the lack of jumping frogs, Calaveras County selected Jason’s tune as their official song. When he played it Monday night, Jason omitted a verse about Calaveras County leading in the production of marijuana. (I suspect Mark Twain would find this fact delicious.)

Drinking is a more prominent theme in Jason’s work than smoking pot, or at least it has been since his song swap some years ago with fellow country troubadour Walt Wilkins. As they traded songs, Jason’s turn to present an original drinking song came up, and he was empty-handed. He wrote “Whiskey Drinking” to fill that void.

Courtney shared a story about their home in Texas, on a lake, which is inside of a gated community. She was careful to say that it’s not a fancy place, but that the gates are required because of the lake. Just outside the gates, she told the audience, is a wonderful little karaoke bar, where she and Jason can go and enjoy some anonymity.

Jason talked about an appearance in Reno, Nevada. He was excited to be able to call out Reno in a song, but he discovered that “Reno doesn’t care if you say Reno in a song.” He suggested that, perhaps, Johnny Cash had burned out the town’s enthusiasm for the hometown pop.

In a more somber moment, Jason and Courtney played a song by Kylie Ray Harris. Kylie passed away recently in a car accident.

For their encore, the duo finished with a tune by Ricky Skaggs’ mother, Dorothy, “All I Ever Loved Was You.” I was fascinated to learn that Dorothy had written music; surprisingly, in his autobiography, Ricky doesn’t mention this.