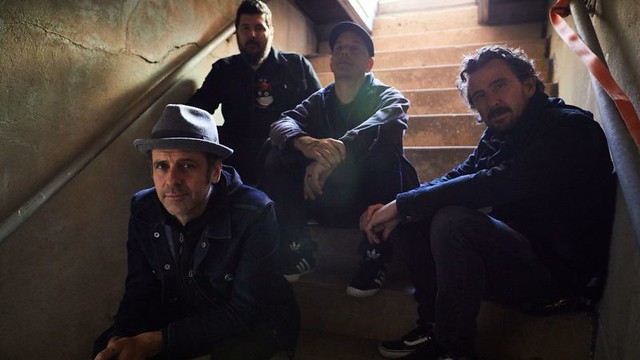 “We live our life in our own way, never really listened to what they say.”

The Bouncing Souls electrified the large crowd at The Fillmore Silver Spring on a recent, blustery night as they swung through the DMV on the tail end of the band’s 30th anniversary tour.

The walk-on song that the rambunctious New Jersey foursome chose for the show on Dec. 18 — Simple Minds’ “Don’t You (Forget About Me)” — poignantly underscored what a truly massive achievement it is to successfully play in a punk rock band, full-time, over the course of 30 years (for reference, I was 5 years old when they first started gigging).

The crowd certainly did not seem to have forgotten The Souls. Over the course of the 75+ minute set, from the opening barrage of “Hopeless Romantic” all the way to the last (pre-encore) tune “Manthem,” you could hear a deafening chorus of voices accompanying the band (free of charge!). I’d wager a good two-thirds of the room were singing along whole-throatedly by the time the band broke into their pop-heavy ballad “Lean on Sheena.”

Granted, when you have a successful career that spans 30 years and over 30 EPs and full-length releases, I guess it’s not that hard to imagine that every song they play is a hit.

It struck me that the theme of the night was continuity. Although, over the decades, The Bouncing Souls have gone through a couple changes in the drumming department, the guitars, bass, and vocals have remained the same since their humble 1989 beginnings in New Brunswick.

Frontman Greg Attonito’s distinctive voice still sounded exactly the same at The Fillmore as it does on the Souls’ breakthrough 1994 record The Good, the Bad, and the Argyle, which is a huge boon for a band that relies heavily on sing along choruses and hooky melody lines. The chug-a-lug strings section, driven by fellow founding members Pete Steinkopf and Bryan Kienlen, had the same manic energy and polished tones as the first time I had the pleasure of catching these dudes live, almost 20 years ago.  Indeed, even the faces in the crowd at The Fillmore were familiar to me.

Continuity. While the tunes that The Bouncing Souls played were written over a score and a half of years, they all seamlessly fit together within the setlist, providing for a very consistent listening/singing/dancing/moshing experience. And as I listened to these punk rock stalwarts play songs from wildly different eras, it dawned on me how prolific and influential their music has remained throughout the years.

Stream a smattering of songs taken from The Bouncing Souls’ setlist from their Dec. 18 show at The Fillmore Silver Spring on Spotify:

The entire night was an exercise in brotherly love, mutual enjoyment and cheerful reflection, as the band and audience fed off each other’s good spirits. Attonito is a true believer (see what I did there?) in crowd participation, and often crossed the security barrier to dance and sing along with all us plebes, while also entertaining song requests from the masses.

These guys are not forgotten, and they stubbornly refuse to bow into the pressures that come from being in a full-time touring band. It may be 30 years since their genesis, but The Bouncing Souls continue to live their lives in their own way, no matter what anyone else will say.

For more of The Bouncing Souls, visit the band’s website.