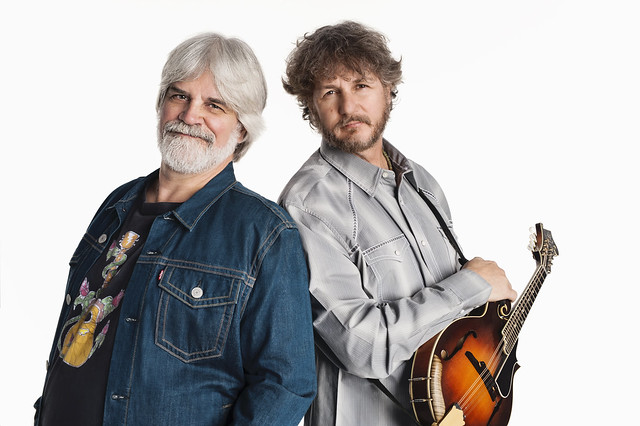 Mark Engleson: Hi Vince, how are you?

ME: Getting started on the tour today?

VH: No, I’m going to pick up a friend. We’re playing a couple side gigs the next couple of days in Denver, and then going off to Jamaica on Saturday morning.

ME: Is there an event down in Jamaica this time of year?

VH: I go down to play with Little Feat.

ME: I remember it being later in the year last year. I remember Amy Helm mentioned it.

VH: She’s down there every year.

ME: Are you excited about the upcoming tour where it’s just you and Drew?

VH: You know it, man. It’s so fun because we’ve been doing it for so long, anything’s on the table. We know how to follow each other.

ME: You start getting in each other’s heads after all those years.

VH: Oh, yeah. We’re both Geminis, so it’s pretty clear where the other is going. That’s anywhere! [Laughs.]

Stream Something Higher by Leftover Salmon on Spotify:

ME: I did a review of your last album, Something Higher, which came out in April 2018. I enjoyed your work there. What kind of projects do you have on the table at the moment?

VH: We’ve got a new record about 85 percent finished. We’re going to release a little bit at a time over the next year, and by next Thanksgiving or so have them all released on some kind of album.

ME: With the duo show, is it more planned or spontaneous?

VH: We’ve done two so far. We had a game plan, but it veered.

ME: As these things will.

VH: They sure will, and that’s the beauty of it. We’ve played together so long, we can go anywhere.

ME: You and Drew have been the two constants in Leftover Salmon. If I remember correctly, there were three of you who founded the band. And unfortunately, you guys lost Mark Vann, the third, some years ago.

VH: We’ve been through a lot of changes. I guess we’re the only ones too dumb to quit!

ME: You’re still enjoying it, I assume?

VH: I sure am. I’m happy as can be. We’ve got a lot of other things going on the side: a little family band with my kids. My son’s an engineer, so he and I are making records together. I’ve got a new project with the band the High Hawks: Tim Carbone from Railroad Earth, Adam Greuel from Horseshoes and Hand Grenades, and our bad Chad Staehly from the Hard Working Americans and the rhythm section of Great American Taxi. Lots of other projects on the table, big fun, and continuous creativity. It’s a well-rounded life.

ME: Now, as far as the duo shows, and you’re playing guitar?

ME: There were two bands that came together to form Leftover Salmon. You were in?

VH: I was in the Left Hand String Band. Drew started a band called the Salmonheads. We put those two together — the Salmonheads were kind of a jug band.

ME: You guys do some stuff in French too, some Cajun stuff.

ME: I took a year in high school, but that’s 25 years ago. Like I remember any of it! You guys got together in Boulder, right?

ME: I see the connection — Little Feat, Railroad Earth. You guys were kind of the first jam band to veer into that bluegrass/country territory, though.

VH: I don’t like to say we started anything, because everything comes out of everything else.

ME: Sure. If you look at the Grateful Dead, Jerry Garcia was, in a lot of ways, fundamentally a bluegrass player.

VH: The [Nitty Gritty] Dirt Band, David Bromberg with New Grass Revival — all that stuff. They were all knocking on the stage door, but I guess we maybe started a different thing socially with music. David was a major, major influence on us.

ME: I assume the Dead were–

ME: You guys got into the business of the herbal variety a few years ago.

VH: We had a little bit of tinctures and such. That’s a major part of the culture here.

ME: DC is interesting because they’ve decriminalized possession and use, but you can’t sell it.

VH: Yeah, and music has a role to play in making that culture more accessible and we’re happy to step into it to do that sort of thing. I lived in Oregon for a while, I was growing there, it was all legal. I’m back in Colorado now, which isn’t the prime environment to grow in. The culture is accepting it, though.

Parklife thanks Vince Herman for taking the time to interview with us! You can catch him in a duo performance with Drew Emmitt at the City Winery DC on Tuesday, Feb. 11.