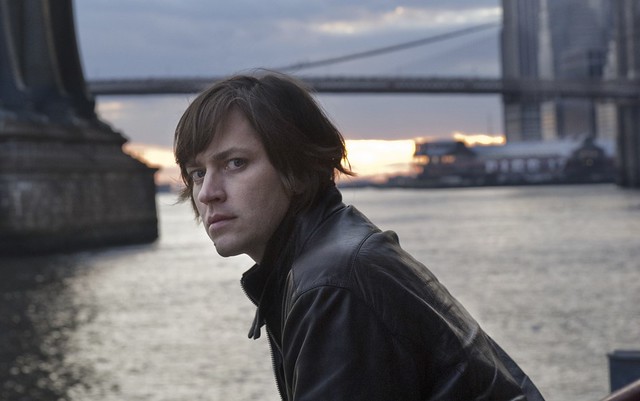 Two things are immediately striking about Old 97’s frontman Rhett Miller. First, his youthful appearance: Despite being, at 49, my senior by 10 years, Rhett looks younger than me. The second is his energy: Rhett has a heart-on-his-sleeve, sincere exuberance. He plays vigorously and sings with power, and, both times I’ve seen him live, he really seemed to be having a good time.

“I’ve got a lot of great memories of the Black Cat,” said Rhett, who went say that he’ll always think of the venue as a punk club, during his performance at the storied venue on Feb. 9. He further explained that when he started making solo acoustic appearances, it was the first venue he played outside of New York or Los Angeles. He’s played at the club with both the Instigators and the Believers.

On this tour, he was accompanied by his good friend Salim Nourallah, who has produced for the Old 97’s. He came out at the start of the show to introduce Salim. While on the road recently, he told the audience, they’ve written three songs.

In addition to his body of work with Texas alt-country heroes the Old 97’s, the Dallas native has recorded a substantial body of solo material. His next song, “Our Love,” came from his 2002 album, The Instigator, as did “Come Around.” From his most recent solo album, The Messenger, Rhett played “I Used to Write in Notebooks” and “You Were a Stranger.” Introducing the latter, he said “I don’t have many songs that are romantic,” and he enjoyed tapping into that sweetness.

Stream The Instigator by Rhett Miller on Spotify:

The bulk of the set, however, was Old 97’s material: “Rollerskate Skinny,” “Singular Girl,” “Big Brown Eyes,” “Four Leaf Clover,” “Nineteen,” “Victoria,” “Barrier Reef,” and “Doreen.” When Rhett plays on a Sunday, he has second thoughts about “Jesus Love You,” a song critical of religion, he confessed.

Introducing the Old 97’s song “Nashville,” Rhett made and quickly rescinded a faux apology for its language. “When grown-ups have strong feelings,” he declared, “they use these words.”

Songwriting is often inspired by a concept or an idea. Rhett shared how he and Salim had just written a song after reading a quote. “Sometimes,” however, “writing a song is straight-up commerce,” as was the case for the Old 97’s number “Jagged.” At the time he wrote the song, Rhett was living with a girlfriend, a film producer, in Los Angeles. She had just finished working on Waiting for Guffman, and she asked him to write a song for the film.

Rhett closed his set with the Old 97’s favorite “Longer Than You’ve Been Alive.” The crowd was engaged throughout the show, and it was a great time indeed to be alive.