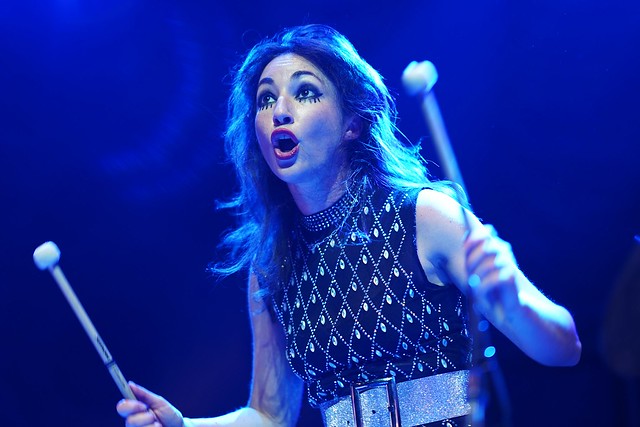 KOLARS — an unforgettable and invigorating two-piece cosmic glam rock act from Los Angeles — served up a bonus to fans in attendance at Saint Motel’s recent show at the 9:30 Club.

Comprised of husband-and-wife tandem Rob Kolar and Lauren Brown, KOLARS took the stage as the opening act on Feb. 11 at 9:30 Club, but by the end of a 10-song set, the band had proven itself more than capable of captivating and thrilling a sold-out audience of that size.

Formed in 2016, KOLARS features Rob on electric guitar and Lauren on drums, but in an unconventional fashion — Lauren tap dances on a custom-made, tunable 22-inch bass drum with the bottom chopped off while also hammering away on modified drum assembly including a standing bass drum, a floor tom and a collection of cymbals.

Sweating through a sparkling sheer sequin jumpsuit, eyes entranced, Lauren showed her ability to create a rambunctious, pounding march and to layer it with crashes from her seemingly minimalist drum kit. Her playing style is physical and luxuriant.

Rob, a skilled producer and multi-instrumentalist, brings his own flash and magnetism as a Hollywoodian lead man. He’s a wider-eyed Ritchie Valens with far more psychedelic swagger and an even better wardrobe, dressed on the 9:30 stage in a glitter-festooned black suit, his hair bouncing with curls.

In addition to lead guitarist, he’s the melodist for the pair, monitoring timing and injecting thick, rough-textured, high-strung blues riffs into the band’s compositions while also controlling a track that provides additional folds of textures and instrumentation.

The grandson of legendary British actor Robert Shaw, Rob’s story is one of redemption: After suffering a terrible hand injury that almost cost him his career, he was contacted by screenwriter Steve Pink, who invited Rob to be the composer for a then-new TV series, The Detour.

It essentially helped give Rob’s life a new direction, and it was about at that same turning point that he and Lauren formed KOLARS.

Originally members of the LA chic folk group He’s My Brother, She’s My Sister, the two have a long history of performing together, and it showed in the telekinetic connection they benefit from on stage. Having played several hundred shows together as KOLARS, this a man and a woman who can hear one another with great clarity and can effortlessly transfer strength to one another.

They feed off each other and, at different points in their recent performance, the sexual energy was not only apparent but unabashed — and onlookers couldn’t help but want more.

“Give it up for my incredible wife and bandmate,” Rob told the crowd. “There’s no one I’d rather share the stage with in this entire world.”

Taking the audience through tracks from the 2018 self-titled LP, as well as several singles released since, KOLARS were without question playing to some fans who came to see them specifically — devotees were jammed into the front row, including several young girls who gave all their attention to Lauren.

Stream Kolars by KOLARS on Spotify:

A single cut through a collaboration with Pearl Jam’s Mike McCready, audience members were treated to “Touch the Lightning” early in the set at 9:30 Club. It’s a deeply sensual groove with nasty electric chords that stomp in synch while the lyrics speak about giving in to universal temptations: “The skies are calling, I want to touch the lightning, and I am falling into the outer space.”

The band’s newest single, “Here Comes the Night” manifested at 9:30 Club as a funky, winding celebration of finding comfort, support, and even love in the darkest places or times. It has a street fighter’s strut to it, but the vocal structure (especially with the children’s choir added on the studio cut) juxtaposes a sense of youthful adventure and promise.

Another darkly possessive and catchy track, “Turn It Up” demonstrated KOLARS ability to induce large-scale boogie as the 9:30 crowd became a whirling, hopping throng not even midway through the set. Characterized by a swinging, pumping pace, and offset by Rob’s signature dirty distortion, this song further serves as fitting anthem for the couple and their ongoing musical endeavor.

One of the most powerful songs in the KOLARS catalogue, “Beyond the World of Man” is a mesmerizing track Rob wrote for his dad, film producer Evzan Kolar, who passed away in 2017.

Perhaps giving “Beyond the World of Man” even more gravity in retrospect and moving forward, Lauren’s father passed away the day following KOLARS’ appearance at 9:30 Club. A testament to the band’s fortitude, the couple pressed forward, continuing on the road as the opener for Saint Motel. And they will continue for the remainder of the tour.

Blending blues, rockabilly, and grunge with elements of electronica and schoolhouse rock — one of the many distinct sounds coming out of Lauren’s tailored kit — the duo achieves a powerful musical result that should be appreciated for its style, its hidden virtuosity, and its unmistakably positive drive.

Coattails
King of Carrot Flowers, Pt. One
Touch the Lightning
Turn It Up
Beyond the World Man
Here Comes the Night
Dizzy
Turn Out the Lights
One More Thrill
Dangerous

Here are some photos of KOLARS performing at 9:30 Club on Feb. 11, 2020. All photos copyright and courtesy of Casey Vock. 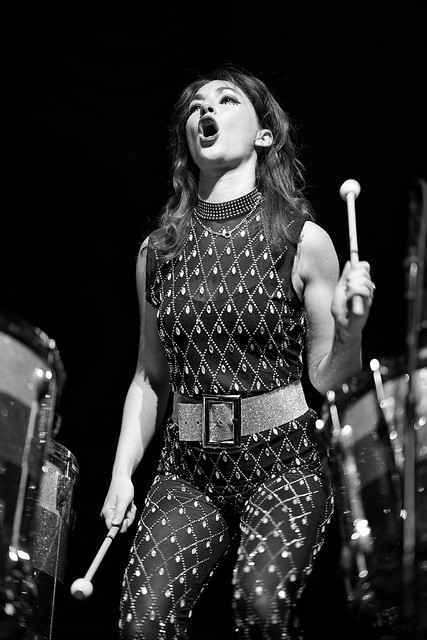 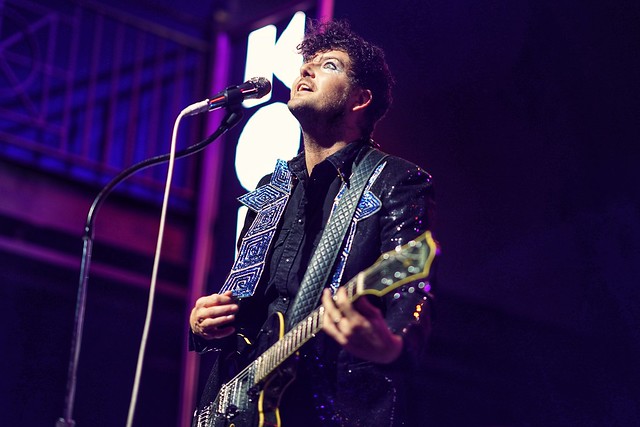 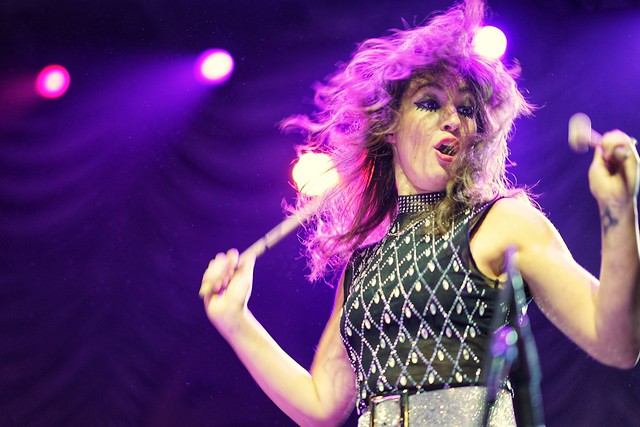 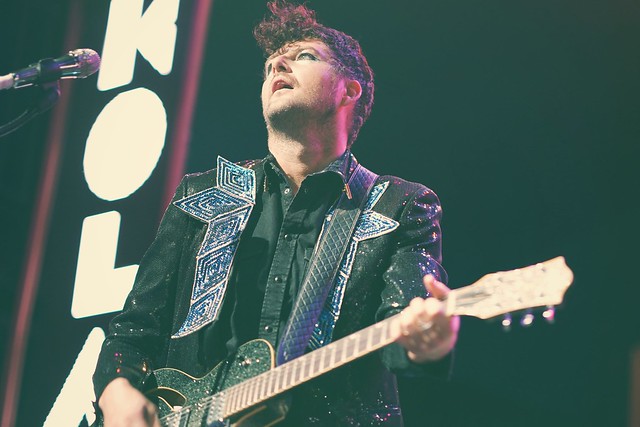 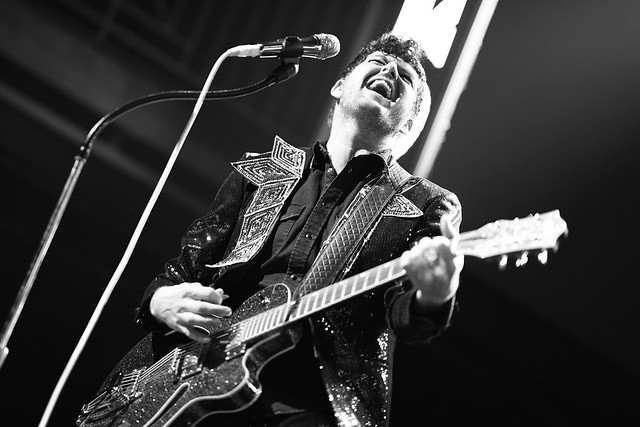 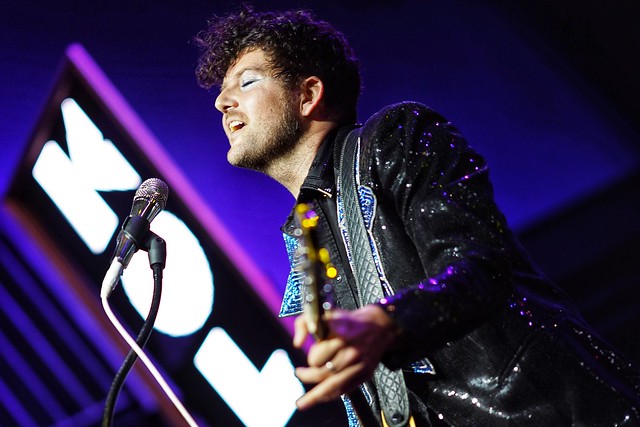 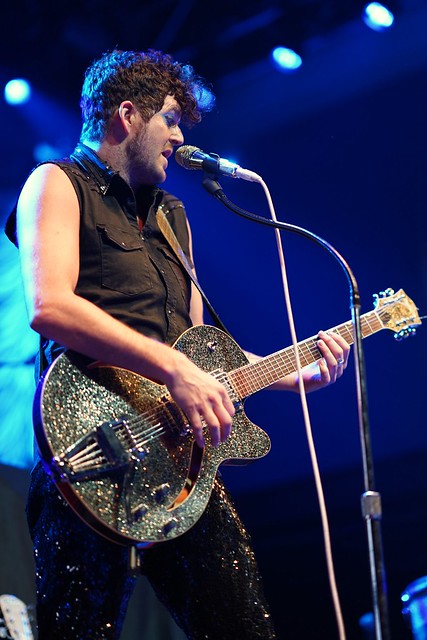 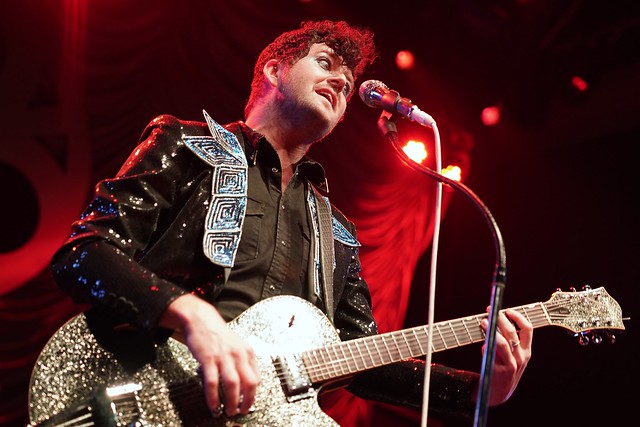 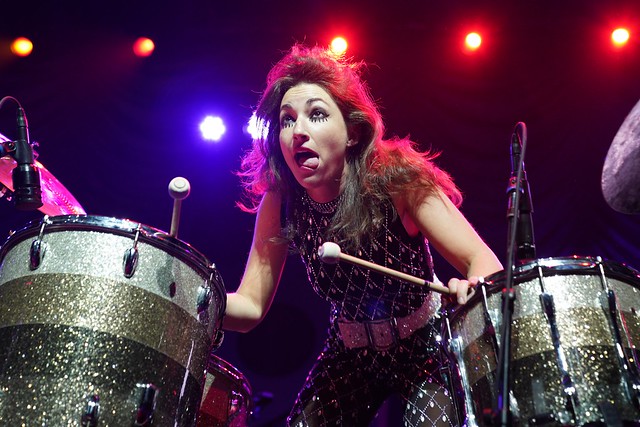 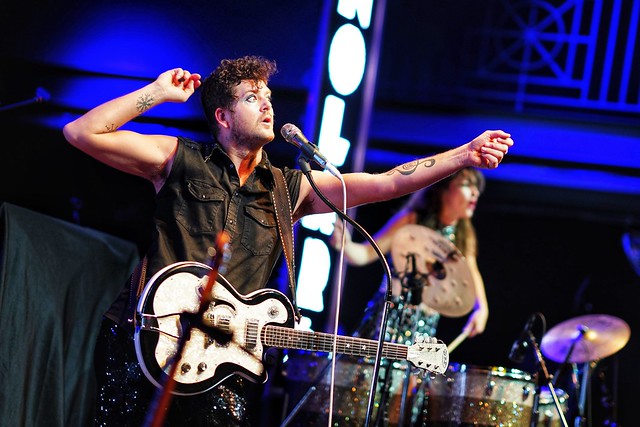 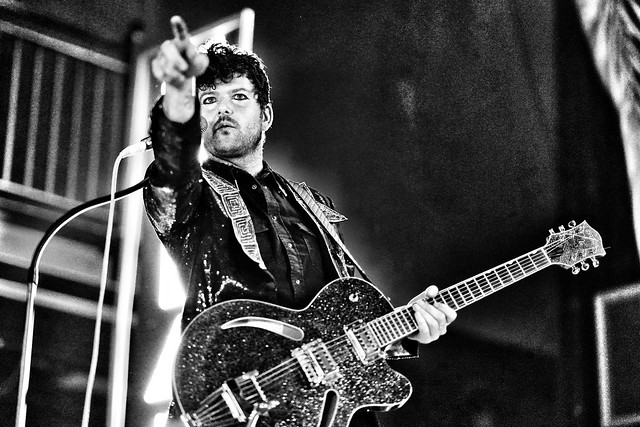 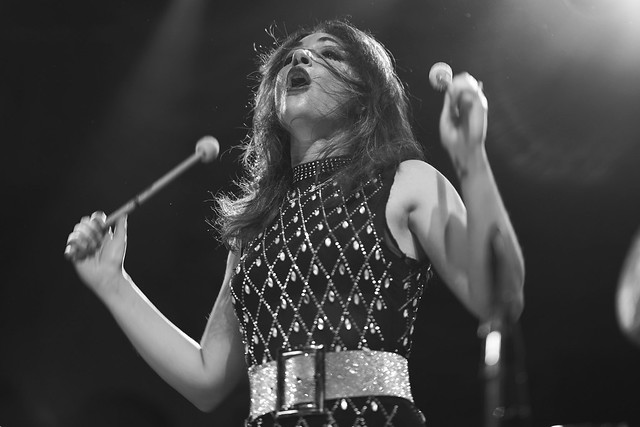 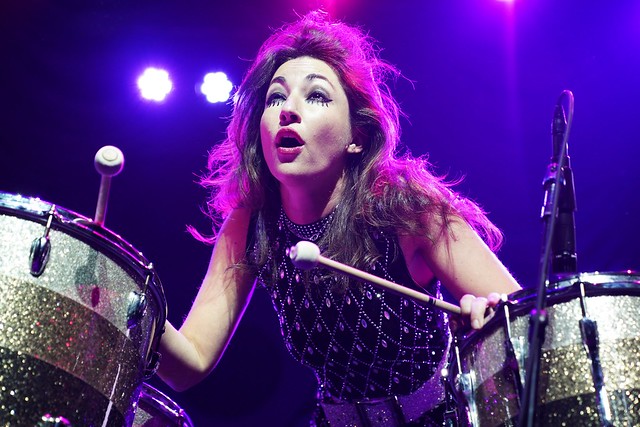 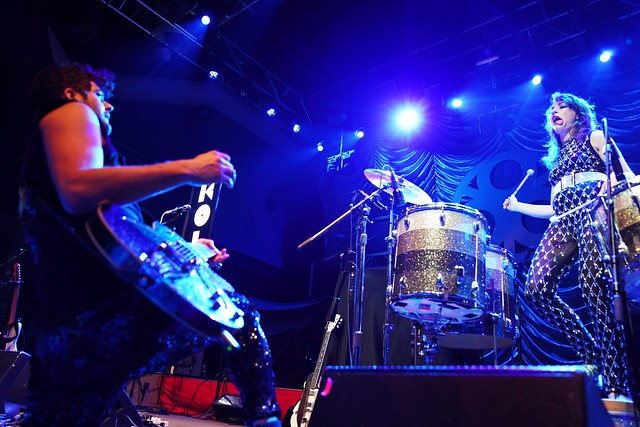 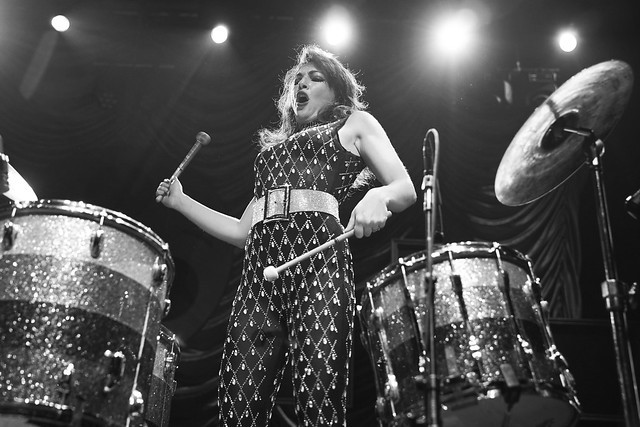 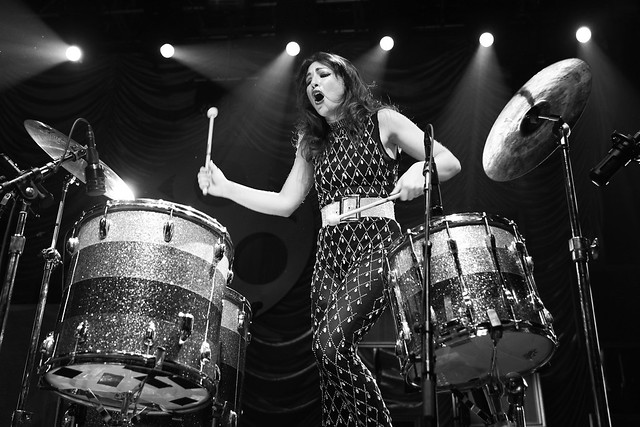 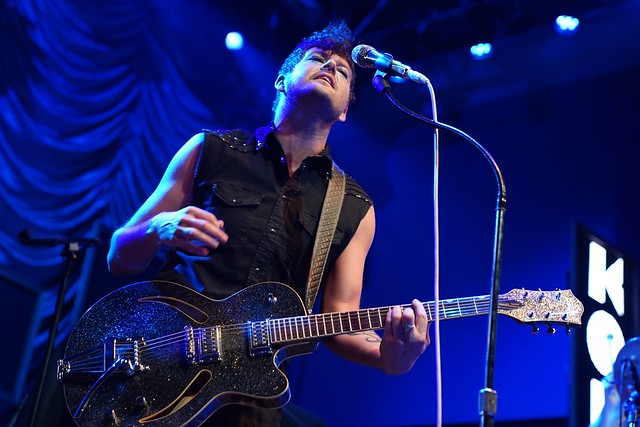 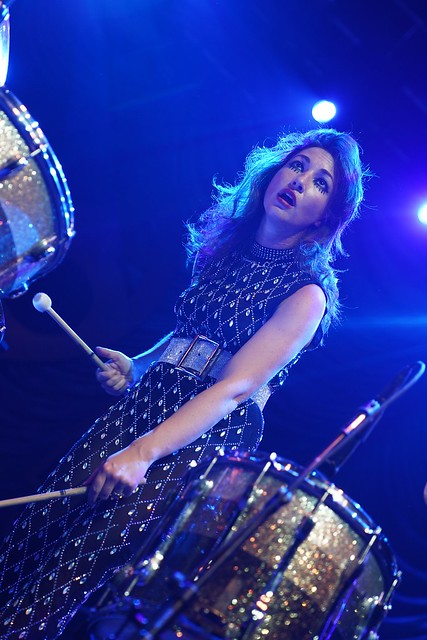 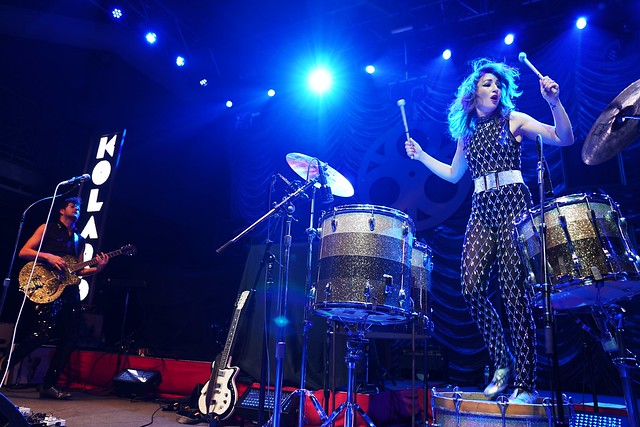 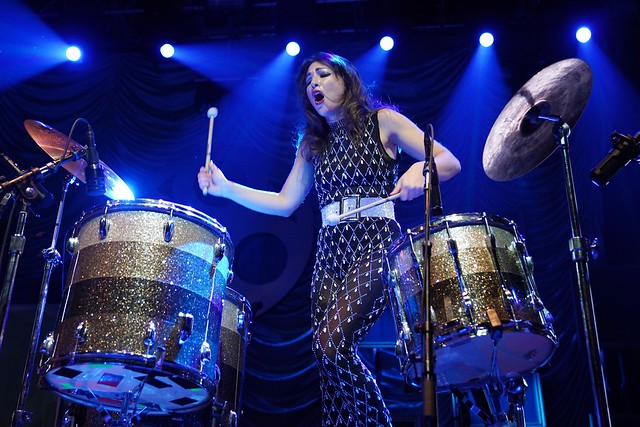