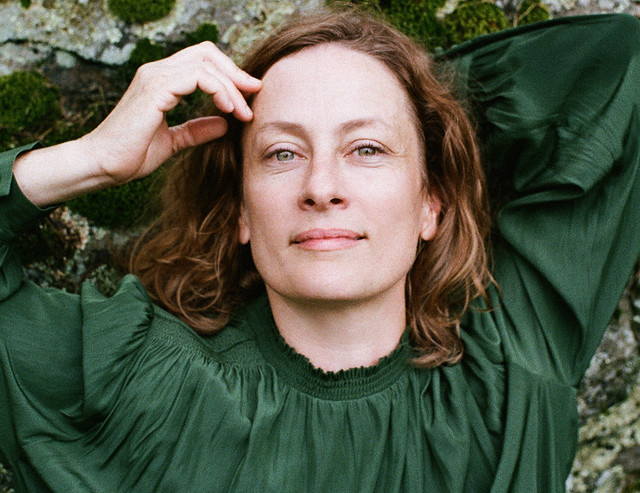 Sarah Harmer thanked The Birchmere “for having faith after 10 years that I can still sing.” The critically acclaimed Canadian singer-songwriter recently released her first album in as long, Are You Gone. Over the last decade, she stepped away from music and was engaged in environmental activism. In 2005, Sarah found PERL, Protecting Escarpment Rural Land, to campaign to protect the Niagara Escarpment against a gravel development.

Wednesday’s show at The Birchmere kicked off her tour in the United States, and it was the first show where Chris Pureka opened for her. She opened the set playing acoustic guitar on a new song, “St. Peter’s Bay,” with her band — all Canadians — backing her on electric guitar, bass, keys, and drums.

The next song, “Late Bloomer,” came from Sarah’s 2010 album, Oh Little Fire. Switching to an electric guitar for “New Low,” she complimented that “it’s nice to arrive here and get a hug.” She added, “This is maybe not dinner theater music.”

After “Low,” Sarah went back to her acoustic guitar. A fan called out, “What’s for dessert?” “Tequila,” answered Sarah. She introduced “Just Get Here” as a song she wrote for the documentary Al Purdy Was Here about the late Canadian poet, talking about his A-frame in the wilderness where he’d invited prominent artists and writers, like Margaret Atwood.

Stream Are You Gone by Sarah Harmer on Spotify:

Although she didn’t mention who, Sarah told the audience that “What I Was to You” was “for another late, great poet.” She followed that with “Greeting Card Aisle,” from her 2004 LP, All Our Names.

Sarah, as she told the audience lives in the outer suburbs in Ontario. It’s “quiet out there until you find out your neighbors are con artists,” she said. She had promised herself that she wouldn’t tell this story, as she seems to still be somewhat wary of these folks. “It’s okay,” she assured the audience, “I got a song out of it.” The title, “Cowbirds,” was inspired when the avians, who are known for stealing eggs out of other birds’ nests and replacing them with their own, flew under her bird feeder. The words came to her in “the wee hours.”

Between songs, Sarah mentioned that she’d last come to the DC area for a climate march. Borrowing a handkerchief, she wiped the sweat off her brow, and began playing “Take Me Out.” She quickly stopped, admitting that she’d put her capo in the wrong place, and making a sad trombone sounds. As she adjusted her instrument, a fan called out, “We missed out!” Another shouted, “You’re among friends!”

With just her bassist and her keys player, Sarah continued the set with “Little Frogs,” followed by “another one about critters” called “Squeaking Voices.” The rest of the band came back and they played “The Lookout” and “The City.” Before finishing the set, appropriately enough, with “Washington,” Sarah mentioned that she passed up a chance to attend the Obama inauguration in 2008, but that she hopes to be here next year for Bernie Sanders’s.

An enthusiastic ovation brought Sarah back for an encore. “I don’t have anything planned,” she said.” Introducing “Dogs and Thunder,” she said, “This one’s a weeper.” The band came back and Sarah played her hit single, “Basement Apartment.” To send the audience home, they played the last song on the new album, “See Her Wave,” which takes place on the west coast of the province of Newfoundland.

If you didn’t know that Sarah had taken such an extended break from her musical career, you wouldn’t have on Feb. 26. She was in fine form, showing no rust on stage. And her new album, Are You Gone, is a reminder of what a strong writer she is.