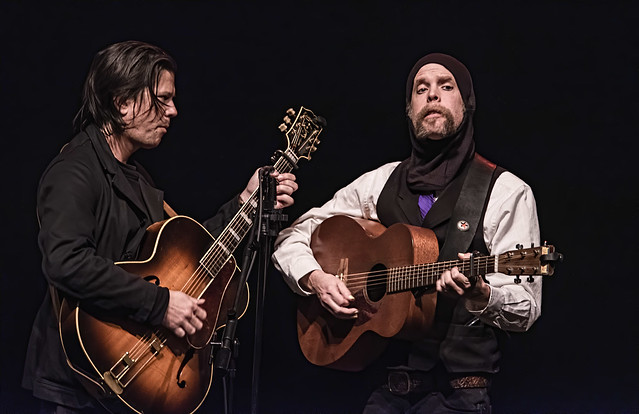 It’s also hard to think that the last proper Bonnie ‘Prince’ Billy (the name Will has performed under for the last 20 years) full-length album was in 2011, but that may be due to number of projects he’s been involved in since that time, including playing a character in the 2017 film, “A Ghost Story.” Listening to the new LP, I Made a Place, I feel that familiar warmth but there’s a variety here — partly due to instrumentation — flutes, banjo, fiddle — and partly, I think, to frequent partners Joan Shelley and Nathan Salsburg who contribute to the album.

I’ve seen Bonnie ‘Prince’ Billy perform a number of times in Baltimore where he lived for a short time, but I hadn’t seen him perform in several years. Seeing that not only was he returning to DC, but that he’d be performing on tour with Jonathan Richman, I had to catch up with Mr. Oldham. And on Saturday at the Lincoln Theatre, Bonnie ‘Prince’ Billy took the stage along with Emmett Kelly (Cairo Gang, Ty Segall) to, borrowing his term, commune with this rapt audience.

The evening started with “Thick Air” from the new album — a song that Bonnie ‘Prince’ Billy described as one of those songs that tells a story. And with just the duo of Will and Emmett — the songs stripped to two voices and two acoustic guitars — that poetry of these songs shined through: Let the dead be the dead / We are living, my friend / And the thick air of duty / Has died.

Most of the set was pulled from I Made a Place but Bonnie ‘Prince’ Billy also explored his extensive catalog, including “You Remind Me of Something (The Glory Goes)”; one of my favorite Bonnie songs, “A Minor Place”; and a song Bonnie ‘Prince’ Billy recorded with Emmett Kelly’s band, the Cairo Gang called “New Wonder.”

One of the highlights of the evening was when Oscar Parsons — a Louisville artist who has not only been traveling with the Bonnie ‘Prince’ Billy but has also produced watercolor art for Will, including his tour poster — came out to sing (what Will jokingly said was going to be a song he wrote for his mother) Roger Miller’s “Dang Me,” getting the theater singing along.

I think what I love about hearing Will Oldham’s music live is that he has always written from a sense of shared expression. And when you hear words such as “I know the sun’s about to come up / I close my eyes anyway / My mouth is dry and the sheets are cold / And will be still come break of day” (from “At the Break of Day”), you become more focused on what’s being sung and how it’s expressed. Even the humor in his songs seem to be magnified too as the audience laughed along just as much as we were singing.

Will and Emmett returned later in the evening to sing alongside the great Jonathan Richman on a couple of tunes, making the evening a special one. This tour in particular is one not to miss. Two brilliant artists who are as diverse in their songwriting as they are in their performances.

The double bill of Bonnie ‘Prince’ Billy and Jonathan Richman continue their tour through the Spring. More information can be found here.

Here are more photos of Bonnie ‘Prince’ Billy performing at the Lincoln Theatre on March 7, 2020. All photos copyright and courtesy of David LaMason.