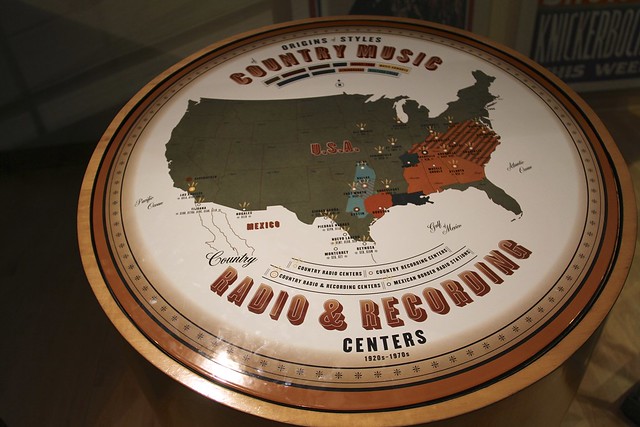 A peek inside the Country Music Museum (Photo by Adinda Uneputty)

Country music and genre fiction (specifically science-fiction and fantasy, hereafter just “sff”) might not seem like they have much in common. In fact, they have developed along strikingly similar lines. Both are popular art forms subject to a certain devaluation, especially by cultural elites. And in both cases, there is a divide between a more conservative mainstream that appeals to the masses and more political progressive, artistically ambitious element.

Although it’s recently gained more mainstream acceptance (courtesy of Harry Potter, Lord of the Rings, and the Marvel Cinematic Universe), sff has long been the object of both critical and popular scorn. Fans of sff are still considered geeks, with all the negative stereotypes that go with that term.

Beginning in the 1920s, sff circulated most widely through pulp magazines, named for their cheap paper. These magazines published quickly and cheaply, and they often appealed, especially in their artwork, to lurid tastes. At a convention, I heard the anecdote that, even into the ‘50s, sff novels would come wrapped in brown paper, like pornography, and readers would conceal the books and magazines underneath a newspaper. When Philip K. Dick, whose work has been adapted into the films Blade Runner, Total Recall, Minority Report, and Paycheck, showed a coworker his first published story, his coworker said something along the lines of “I didn’t know you read that garbage.”

Around the time of the emergence of the pulps, country music emerged as a distinct genre of music. Just as sff had 19th century precedents like Mary Shelley and Jules Verne, country music developed from the old-time and folk music traditions of the American southeast. As a rural phenomenon, country music was originally called by the more pejorative “hillbilly music.” Even today, the stereotype of country music as southern, rural, and unsophisticated persists. Music marketing, especially in the north, reflected this perception. Growing up outside of Akron, Ohio, I regularly tuned into the public radio station WKSU, which played what they called folk music on the weekend. As I later learned, many of the artists played, like Emmylou Harris and Iris DeMent, were more country artists. In northeast, urban Ohio, though, you just didn’t tell a public radio audience that what they were listening to was country music.

Watch John Prine and Iris DeMent sing “In Spite of Ourselves” Live from the Sessions on 54th St. on YouTube:

While Emmylou Harris and Iris DeMent are country musicians, they certainly didn’t fit the cowboy-hat wearing image of the genre of the ‘90s. Emmylou, who was discovered by country-rocker Gram Parsons, was part of the wave of progressive country that developed in the ‘70s, and she is associated with the Americana subgenre now. The younger DeMent’s work, which has significant elements of folk in it, also gets labelled as Americana or alt-country.

This brings us to the second element that country music has in common with sff: both have a more artistically ambitious, progressive element that contrasts with the mainstream of the genre. In the early 1970s, artists like Kris Kristofferson and Billy Joe Shaver, influenced by singer-songwriters like Bob Dylan and the turmoil of the 1960s, began writing songs that diverged from the conservative traditions of Nashville. Shaver declared, “It’s hard to be a Christian soldier when you tote a gun.” John Prine, who we just lost recently, sang about drug-addicted veterans (“Sam Stone”), the isolation of the elderly “Hello In There”), marijuana (“Illegal Smile”), and the Vietnam war (“Your Flag Decal Won’t Get You Into Heaven Anymore”).

Around the same time that progressive country was born, New Wave sff appeared. A reaction to the pulpy traditions of the Golden Age, the New Wave saw writers experimenting with approaches to consciousness and perception. Sexuality became a much more prominent part of sff (though Robert Heinlein’s slightly earlier Stranger in a Strange Land, a departure from his generally conservative viewpoint, is notable). New Wave also embraced a political progressivism that differed markedly from Heinlein and the influential editor John W. Campbell. While women had published before this time, the feminists presence in sff expanded greatly, with figures like Ursula Le Guin, Joanna Russ, and James Tiptree (the pseudonym of Alice Sheldon) becoming highly influential in the late ‘60s and ‘70s.

As notable as the politics of these two artistic movements was the way they incorporated influences from the artistic mainstream. In her essay “Science Fiction and Mrs. Brown,” (referring to a character described by Virginia Woolf in her essay “Mr. Bennett and Mrs. Brown), Le Guin chided much of sff for its failure to develop notable characters. Good writing, whether in the literary mainstream or in meant to fit within the sff genre, should, she argued, take up the humanistic pursuit of developing characters with compelling lives and stories.

Willie Nelson, one of the leading figures of progressive and outlaw country, looked outside the genre in crafting many of his songs. There is as much of Frank Sinatra, to whose work he has devoted entire albums, and Tin Pan Alley in his songcraft as there is the Carter Family and Hank Williams. His biggest-selling album, Stardust, consisted entirely of covers of classic pop songs.

Both progressive country music and New Wave sff transformed in the 1980s. Alt-country and Americana, which are often conflated, emerged. Artists like Steve Earle, Lucinda Williams, and the midwestern band Uncle Tupelo embraced a broad musical vision that included not just Hank Williams and the Carter Family, but the country-rock of Gram Parsons and Neil Young. In this respect, a band like Uncle Tupelo shared as much with grunge, which appeared in Seattle around the same time, as it did with mainstream country acts like Garth Brooks. (For those interested, the distinction between Americana and alt-country is that Americana emphasizes more folk and blues elements — Williams began as an acoustic country blues player — while alt-country shares more with the alternative, underground and college rock scenes.)

The artistic cutting edge of sff similarly divided into several fronts. Cyberpunk came to the forefront with William Gibson’s novel Neuromancer. Cyberpunk took an often grim and pessimistic view of the future, in which capitalism, gone to an extreme, made most people’s lives worse, despite ever-progressing technology. Humanism took a much more optimistic view of the future, emphasizing novel social and political arrangements, like Kim Stanley Robinson’s embrace of socialism in his Mars trilogy. Urban fantasy, which placed fantastical elements in the context of the modern (and real, as an opposed to an imaginary) world, was born in Terri Windling’s Bordertown and Emma Bull’s War For the Oaks.

These new movements flirted with mainstream popularity. With particular reference to 1986, which saw the debuts of Earle, Dwight Yoakam, and Lyle Lovett, Steve Earle has referred to this as the “great integrity scare.” For all of this promise, by the early ’90s, country radio was dominated by figures like Billy Ray Cyrus. Artists who had significant mainstream success, such as Rodney Crowell and Marty Stuart had, by the turn of the millennium, made a conscious decision to make music that they saw as authentic rather than trying to appeal to a rather limited and unrewarding mainstream. Earle singled out Shania Twain, who became a megastar in the 90s, as an exemplar of what was wrong with country music; on a picture of Twain, he wrote “talent” and drew an arrow pointing to her exposed midriff.

While there was genuinely interesting, ambitious work being done in sff in the 1980s, there was as much, if not more pedestrian, formulaic work that appeared. Fantasy became dominated by poor imitations of J.R.R. Tolkien. In reading the Big Book of Classic Fantasy anthology, one is struck by the diversity of the genre, and how very different so much of it is from the Tolkien mold. A lot of what came out of this era, however, is in the vein of what John Clute calls “genre fantasy.” Beginning with the Dragonlance Chronicles by Margaret Weis and Tracy Hickman, TSR, the publishers of the role-playing game Dungeons & Dragons, started publishing fantasy novels. Many of the novels, especially Robert A. Salvatore’s books set in the Forgotten Realms world, sold extremely well.

As sff and country music have embraced more elements of mainstream writing and music, mainstream artists have also embraced these genres. Margaret Atwood’s MadAddam Trilogy is post-apocalyptic sf. Kazuo Ishiguro’s Never Let Me Go, set in the near future, looks at the horrific consequences of cloning and advances in transplant medicine, and The Buried Giant is allegorical Arthurian fantasy. Salman Rushdie, whose writing has long included elements of magical realism, put genies in New York City in Two Years Eight Months and Twenty-Eight Nights. Bands like Cracker, with Berkeley to Bakersfield, and the Counting Crows, with Saturday Nights and Sunday Mornings, showed a respect and affection for country music, especially in its more artful forms.

If you look at awards and critical success, it’s hard not to be impressed with the bleeding edge of sff and country music. In both cases, there is far more diversity than ever before. The most recent slate of nominees in the American roots music categories included a record number of nonwhite artists. Recently, N.K. Jemisin, a black woman, became the first writer to win three consecutive Best Novel Hugos for her Broken Earth trilogy, which focuses on the dynamics of oppression. LGBT artists are winning awards and becoming more widely known.

For all the critical success of these artistic movements, they are still seen as fringe elements that occasionally achieve mainstream success. For all the success of writers like Jemisin, there has been a significant reactionary response within sff. If you turn on country radio, you won’t hear the artists who are taking home all the trophies. The money and the machine, in both cases, remains tied to a very limited conception of both of these art forms, works that take no risks and have very little to say.