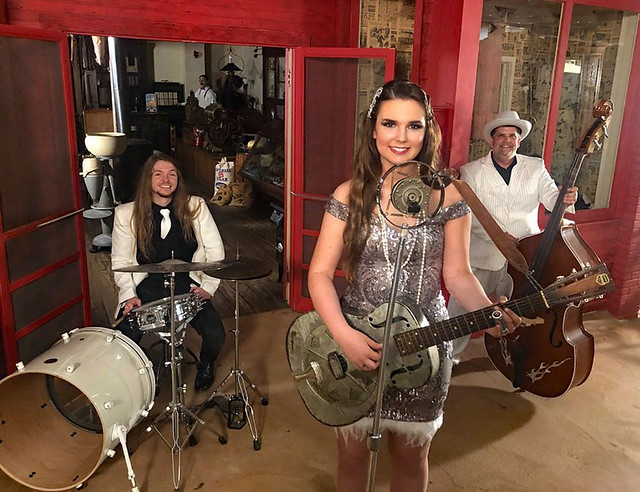 Can’t Stop the Blues presents the Ally Venable Band on Friday, May 8, via Facebook Live! Those who tune in 30 minutes before the show will get an opportunity for a virtual meet and greet with Ally live on Facebook.

Twenty-one-year-old Ally Venable from Kilgore, Texas, is a trailblazer in the rock/blues guitar tradition. She won the 2014 and 2015 ETX (East Texas) Music awards for female guitar player of the year, and in 2015 and 2016, she and her band were the ETX Music Awards blues band of the year.

Ally’s debut album, No Glass Shoes, reached No. 16 in the RMR Electric Blues Charts for 2016. Her second album, Puppet Show, debuted at No. 7 in the Billboard Blues Albums Chart. Her most recent album, Texas Honey, was released in 2019 to universal critical acclaim.

Female guitarists, from blues to jazz, rock to folk have long influenced popular music. Going back to the 1930s and ’40s, Sister Rosetta Tharpe, the Godmother of Rock and Roll, was an inspiration for seminal ’50s rock and rollers Elvis Presley, Jerry Lee Lewis, Little Richard, and Chuck Berry.

Rosetta Tharpe was among the first popular recording artists to use heavy distortion on the electric guitar, foreshadowing the rise of electric blues. Her pioneering technique had a profound influence on the development of British blues in the 1960s; a performance in Manchester, England, on Muddy Waters’ European tour 1964 is cited by prominent British guitarists such as Eric Clapton, Jeff Beck, and Keith Richards.

That long list of female blues guitarists through the decades includes early pioneers Memphis Minnie and Peggy Jones through contemporary artists like Susan Tedeschi, Bonnie Raitt, and Samantha Fish. Clearly, women have as much claim to the blues as do men.

Jazz guitarist extraordinaire Emily Remler said it best in cautioning against judging female guitarists by their looks, “I may look like a nice Jewish girl from New Jersey, but inside I’m a 50-year-old, heavy-set black man with a big thumb, like Wes Montgomery.”

Though clearly not a 50-year-old, heavy set Black man, Ally’s intense guitarwork nevertheless reveals a deep respect, and unique talent, for the blues tradition, and we think she will earn her place among those great guitarists.

Ally also hosts “Texas Honey Sunday’s” on Facebook Live at 2pm CDT every Sunday throughout May. Tune in on Facebook!

To learn more about Ally, her music, and future tour plans, visit her website.