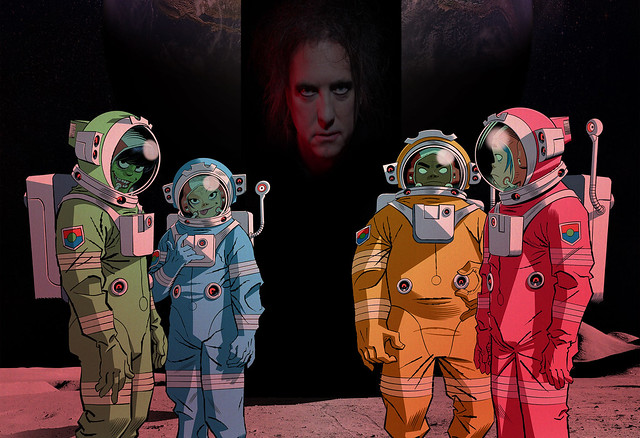 Pretty much every time Gorillaz releases a song during the pandemic, we name it our Song of the Day.

And so it goes with “Strange Timez” by Gorillaz featuring Robert Smith, a combination you may have been waiting for ever since Gorillaz began collaborating with inspirational artists to make songs (which has been since their very first tune)!

Gorillaz started the year with Episode 1 — “Momentary Bliss” featuring slowthai and Slaves — of Song Machine, a whole new concept from one of the most innovative bands around. Now, six episodes in, Noodle, 2D, Murdoc and Russel have visited Morocco and Paris, London and Lake Como, as well as travelling all the way to the moon, and Gorillaz is ready to bring you the full collection. Titled Song Machine: Season One – Strange Timez, out on Oct. 23.

Song Machine is the ongoing and ever-evolving process which has seen Gorillaz joined by an expanding roster of collaborators captured live in Kong Studios and beyond. The result is an expansive collection of 17 tracks embracing a myriad of sounds, styles, genres and attitudes from a breath-taking line-up of guest artists.

The latest episode, “Strange Timez” featuring Robert Smith, sees our heroes on the moon, in full magnificent Jamie Hewlett technicolour, spinning around the world at night, spinning around until the sun comes up, strange time to see the light.

And coming on Dec. 12 and 13 is SONG MACHINE LIVE, featuring a unique blend of visuals and live Gorillaz performance with songs from Song Machine: Season One – Strange Timez performed live for the first time globally via livestream on LiveNow in three time zones.