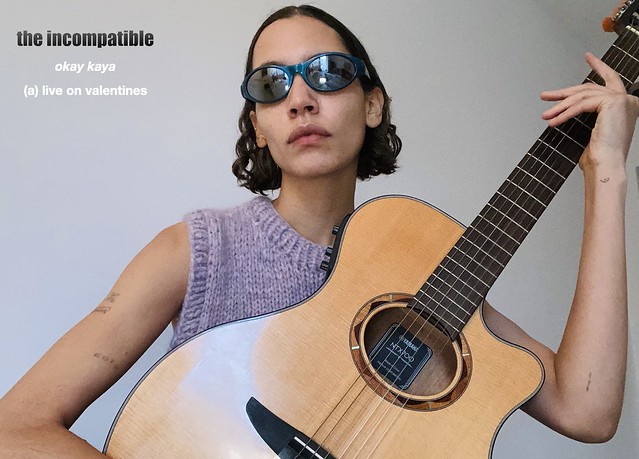 Kaya Wilkins, better known as Okay Kaya, is livestreaming a Valentine’s Day show via Noon Chorus on Sunday, Feb. 14. Catch the darkly soulful singer-songwriter for an engaging and thoughtful, if occasionally melancholy, indie show this weekend.

Okay Kaya released a mixtape, Surviving Is the New Living, last summer. That mixtape followed Watch This Liquid Pour Itself, her most recent full-length album, published by Jagjaguwar. From that album, Okay Kaya most recently released the single, “Psych Ward.”

On “Psych Ward,” Kaya’s scene of nurses making rounds is based on her personal experience of time spent in a hospital. Kaya described the track and the video in her own words:

“This is basically a Hospital Evaluation Form. The last few days I was in a hospital a nurse unlocked one of the cabinets and let me use the rec room guitar, to play outside of art therapy class. I wrote what I saw to understand how I felt. It turned into this funny bop, I wanted it to feel like a Ramones song or something,” Kaya said.

She added, “I wrote the lyrics in a very literal way as I often tend to do. When it was time for a music video I took the words ‘do the rounds’ even more literally by making Kaya pole dance in her daydream during her morning fitness routine. The fitness routines were always to an ABBA greatest hits CD, it felt much too ecstatic compared to the heavily drugged hospital bodies, barely out of bed, barely moving. I wanted the video to show that effort, because I am scared to forget. This whole album is filled with moments I am scared to forget, coming right at you projectile style.”

Watch the official music video for “Psych Ward” by Okay Kaya on YouTube:

In Okay Kaya’s songs, her world looks a lot like ours — Netflix, jetlag, vegan peanut butter and chocolate ice cream, lonely bowls of ramen. But unlike ours, each of these vibrates with a deeper, darker meaning; a desire for understanding. Through Norwegian-raised New Yorker Kaya Wilkin’s dreamy soft-focus lens, the language of Twitter memes becomes poetry as her breathy contralto voice sings lines like, “If you don’t love me at my guttural sound, you don’t deserve me at my guttural sound.” This is Sade for nihilists.