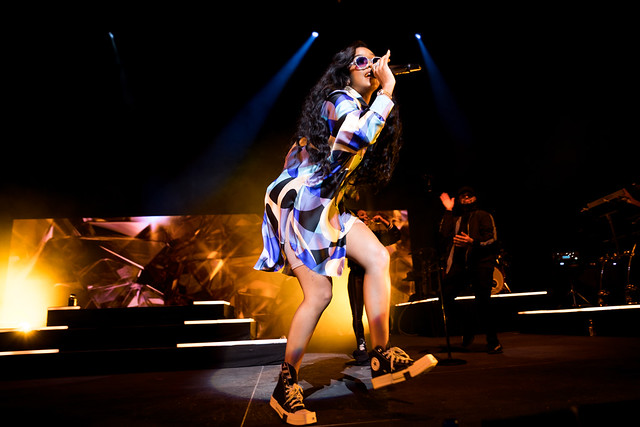 Monday night saw the much-anticipated return of H.E.R. to the District for her October run of the “Back of My Mind Tour.”

On a drizzly autumn evening at The Wharf, a stylish crowd gathered in front of The Anthem in a long, winding line, excitedly awaiting entry to the sold-out show. The return of live music and the chance to see our favorite artists on tour once again (or for the first time) has been a humbling thrill. The Anthem and music venues across DC have made valiant efforts to protect live music goers and show that public health is possible – requiring that masks be worn indoors and that all patrons show proof of vaccination to attend shows.

With this reassurance in mind, H.E.R. fans from across the DMV packed The Anthem to the gills, ready to vibe with their favorite artist.

H.E.R.’s current tour promotes her acclaimed new studio album, “Back of My Mind,” released in June with RCA. The tour follows her Lights On Festival, a star-studded event featuring artists like Erykah Badhu and Ty Dolla $ign, hosted in Concord, California (the Brooklyn edition was postponed to 2022). H.E.R. headlined both nights of the festival, an event which she originally created and curated in 2019.

In Fall 2017, H.E.R. kicked off her first-ever national tour in DC at the now-closed U Street Music Hall. Four years later, the beloved R&B star is now a four-time Grammy-winner and an Oscar winner for Best Original Song for “Fight for You” from Judas and the Black Messiah. Her new album, “Back of My Mind,” features notable collaborations with DJ Khalid, YG, and Ty Dolla $ign, who performs on the title track.

A masterful multi-instrumental talent, singer-songwriter, and veritable icon, H.E.R. is more than the sum of her parts. With passionate fans across the US including established titans like Rihanna, Drake, and Alicia Keys, her music weaves and flows between genres proving that musical style is better when shaken and stirred up. Her choices and musicianship showcase deep musical knowledge, adeptness, and respect for her own musical idols from across R&B, blues, rock, pop and hip hop. At just 24, H.E.R. has taken to stardom with a cool and natural air and is confidently defining a musical lane all her own, while inviting other artists in to share the shine.

Watch the official music video for “Slide” by H.E.R. featuring YG on YouTube:

On Oct. 25, the evening warmed up with three opening artists who are joining H.E.R. on tour, all power-house R&B vocalists making their debuts in DC promoting new projects. A short set from Ajanee entertained with a mix of originals and ‘90s covers, and Maeta impressed the audience with high runs and trills floating over heavy beats and smooth, moody instrumentals. Tone Stith shared warm vocals and an engaging energy, dancing in tight choreography with his backup dancers and occasionally accompanying himself on both bass and electric guitars. He won over the crowd with his emotional ballad “Still Dancin’” and later when he was rejoined on stage by Maeta for an angelic duet.

Before H.E.R. took the stage, members of the audience got to flex their own vocal talents in a singing contest led by the H.E.R. management team from MBK Entertainment. Twenty or so young audience members were invited onto the stage and given 30-seconds to win favor with the crowd. The MC heckled the volunteers in an Apollo-esque manner as they were cheered on by the audience for skillfully covering verses from Lauryn Hill, Floetry, and, of course, H.E.R., before finally crowning the winning title on a seasoned singer he lovingly nicknamed Smurfette.

As the house lights dimmed and the crowd roared, the H.E.R. band took the stage against a display of orange kaleidoscope colors. Screens glowed across the floor as the audience readied itself with cell phones up in anticipation of capturing the opening number.

The set lit up to a high-energy rendition of “We Going Crazy” by DJ Khalid as H.E.R. sang and danced back and forth on the stage, filling the room with synth and excitement. Through the dark tint of her rhinestone-rimmed signature shades, she immediately wooed and wowed the audience with quick transitions between pop and hip hop-inspired tracks like “I Can Have It All” and “We Made It,” backed by the heavy beats and bass tones of her full band. The audience sang along as she sauntered across the stage smiling her million-watt grin while singing a few verses of “Slide,” a hit track off of the new album.

Watch the official music video for “Hard Place” by H.E.R. on YouTube:

H.E.R. flowed into her first slow R&B song and lights framed her standing high on risers, serenading the audience above the sea of fans and phones. From the platform, the audience could see her full effortless look, completed by long, loose curls, a billowing, funky blue-patterned silk dress, and blue sneakers. The crowd sang every word along to favorites like “Damage,” “Focus,” and “Closer to Me,” hanging on her easy runs, arresting high belts, and gorgeous warm tone. She shouted out her local Filipino family members in the audience and her “day-one” fans, thanking them with a dedication of deep cuts like “Say It Again.”

Switching over to acoustic guitar, H.E.R. crooned on a few crowd-pleasing ballads before sweetly easing into “Best Part,” a collaboration with Daniel Caesar that helped her shoot to fame in 2017. Her 16-year old backup singer, Craig, masterfully filled in for the Caesar part of the duet. She then switched over to lead electric guitar for some more rock-out tracks and moody, bluesy covers like “Make It Rain” by Foy Vance. She and her backup singers hit an apex moment on “Hard Place” and brought The Anthem to church with full choral swells and organ.

H.E.R. gave the audience exactly what they came for from start to finish, playing an array of originals and favorites, slaying on guitar, and dropping in a smattering of covers including Lauryn Hill’s “The Sweetest Thing,” Jazmine Sullivan’s “Girl Like Me,” and head-banging renditions of Queen’s “We Will Rock You” and Lenny Kravitz’s “Are You Gonna Go My Way”. She gave each of her talented backup singers a moment to solo and shine, each obliterating long, loud runs. The set felt full and complete with energetic hip hop, beloved ballads, jazzy guitar serenades, full-band blues and rock numbers.

A great performer who emanates cool, DMV audiences will welcome back H.E.R. any and every day of the week.

All images copyright and courtesy of Shedrick Pelt (www.sdotpdotmedia.com)!