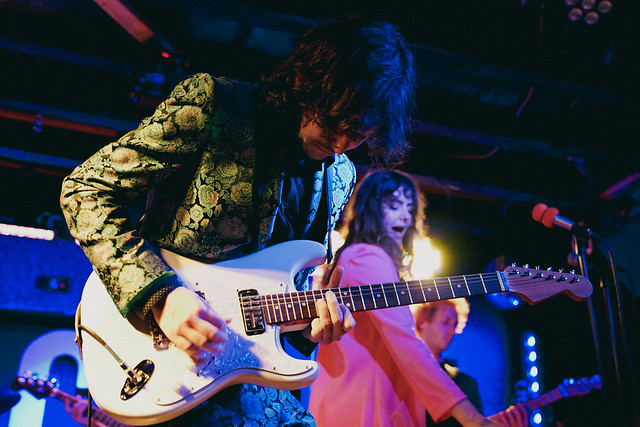 Hailing from Central New York but growing up in a few different spots, including North Carolina, Sam has recently shown that he of all people has perhaps the best understanding of his own skills and the complexity of utilizing them in some sensible fashion that might appease the fickle tastes of modern listeners.

A stop last weekend at DC9, one of Washington’s best small nightclubs, only served to prove that Sam is handling his own evolution with sophistication, class, and grace. Out on tour to support his still-warm-out-of-the-oven Time to Melt album, released in October on Fat Possum Records, Sam strolled into the 9th Street NW venue the night of Nov. 6 and put on a sparkling, winsome set of music that highlighted how much he’s accomplished in just five years of writing songs as Sam Evian.

His latest album fueling most of the night’s song choices, Sam plucked from this illusory batch of compositions for a humble, yet astonishing performance backed by a band that he was proud to himself applaud throughout the evening.

“Lonely Days,” from Time to Melt, is a smooth, gradual hike of a track, led by Sam’s sensual, soothing tone of speak laid over an impulsive rhythm, and he helped create a fascinating path before dropping his electric guitar and picking up his tenor saxophone to place a soothing, grooving solo onto the back half of this one. The thick notches and astral coalescence convinced folks in the room to relax, let their guard down, maybe move a little, and as the set progressed, everybody eventually got down.

“Hi, DC. I missed you, and it’s good to be back,” said Sam, who had been living in New York City up until a few years ago. Like other artists, he found his way out of the city, settling in the Catskill Mountains. But gaining momentum as an astute producer and sound engineer, he brought with him a great deal of relationships, and has since helped produce music for the likes of Big Thief, Cass McCombs, and more.

Continuing through a fluid assortment of songs, “Dark Love” was pulled from Premium, Sam’s 2015 debut album that felt drawn entirely from a fantasy and set the tone for what he’s created since. At DC9, this track let him leverage his most extreme pitch and the extension he can give it. And here was where the band began to really find its synch.

Bass player Brian Betancourt and drummer Sean Mullins collaborated to steer this track onto its seductive thump as Sam again casually set down the guitar and pulled up the sax, accelerating right back down the onramp to blow gripping, attitudinal blues. Bettencourt, who plays in the band Helium with DC’s Mary Timony of Ex Hex (who was there at DC9 to check out the show), showed why he’s sought after — nimble indeed but a beaming, composed presence with his sharp eyes behind his glasses. He used a pick for some songs, just his fingers for others.

Mullins, with a peculiar sneer, brought a dry humor to the pocket along with his sense for timing and texture. In “Dark Love” and others he changed speeds and beats with care to help these songs achieve their intended delicacy. Meanwhile, keyboardist Michael Coleman spun to his right to play what looked like an Arturia KeyStep controller/sequencer, slapping a kaleidoscopic, dreampop icing onto the rhythm from the back left corner of the small stage. He managed multiple devices on various platforms and was instrumental all night in conjuring those complementary or disparate layers in each song and the supernatural use of lingering space.

Vocalist Hannah Cohen is herself a respected and experienced musician, and she joined Sam, her partner, on the current tour, adding character, glamour, and levity. She brought vogue to the DC9 stage with her mysterious, stylish attitude and her carefree dancing, as she snapped, clapped, bopped and swayed with a natural direction to every move she made. Flashing approval to Sam as she’d go, Hannah brought a pronounced dynamic to this outfit.

And a special guest to the band for this tour, additionally serving as Evian’s opening act, Chicago-based electric guitar player and songwriter Liam Kazar added a tremendous boost to the group as an outstanding guitarist with a fresh, rousing sound of his own and a playful personality. Sam referred to Liam as a longtime friend, even calling him “family,” and he credited Kazar with quickly learning his songs, evidenced by ear-pleasing guitar junctures and eye contact between the two during peak moments throughout the set.

“I like this band,” Sam proclaimed during a song break, a grin of pure joy and confidence broad across his face. “It’s a sick band. Oh my gosh. If you’re going to put a band together — make sure you’re the weakest link, that’s how you put a band together.”

Another standout from the new album, “Arnold’s Place” generated elegant guitar and key combinations over lewdly funky bass and drums. And thanks to Cohen’s luminous use of the tambourine, and her rhythmic swings, the visual ornaments of this song seemed to drift upward and outward as the song’s pulse persisted straight ahead.

Released in 2018 on his acclaimed sophomore album You Forever, “Where Did You Go?” live was more rewarding than Sam Evian faithful could ever hope. This song has a limitless curiosity, a winding, circular rhythm with Sam’s whispering at its most lustful and shameless in begging the question embedded within the title of the tune.

His songs so vivid with color and touch that they’re nearly surreal, the lyrics on this highly streamed favorite pulled from the depths of his imagination to coax the entire room into the rich, catching groove:

To produce his newest album, which Sam has said was influenced by a couple of key jazz recordings as well, he sorted through dozens of his working compositions to land on the those. that he truly enjoyed and felt showed promise. Promoting the record in earnests, he announced midway through the set that the band would perform the majority of the album’s A side, “with a B-side addition.”

That run would include a fascinating take on “Dream Free,” a silky, escapist’s delight that features and credits Cohen on the album version. In a live setting, her sugary, alluring vocals fused with Sam’s to bring wonder and appeal to the contemplation laid out by their words:

Having mingled with his fans prior to the start of the show, Sam was asked by a couple in attendance celebrating their anniversary to play “Sleep Easy,” the opening track on Premium — a song he admitted he’d not performed in some time.

But yet Sam honored that request. Glowing toward his bandmates after playing it, he piled more praise on them — acknowledging Kazar in particular for what he’s brought to the tour — then turned to again express his gratitude to the audience.

“Thanks for making it a special night for us in DC,” he said. “We’ll keep coming back.”

Here are images of Sam Evian, as well as his opening act supported by the same band, Liam Kazar, performing at DC9 in Washington DC on Nov. 6, 2021. All photos copyright and courtesy of Casey Vock. 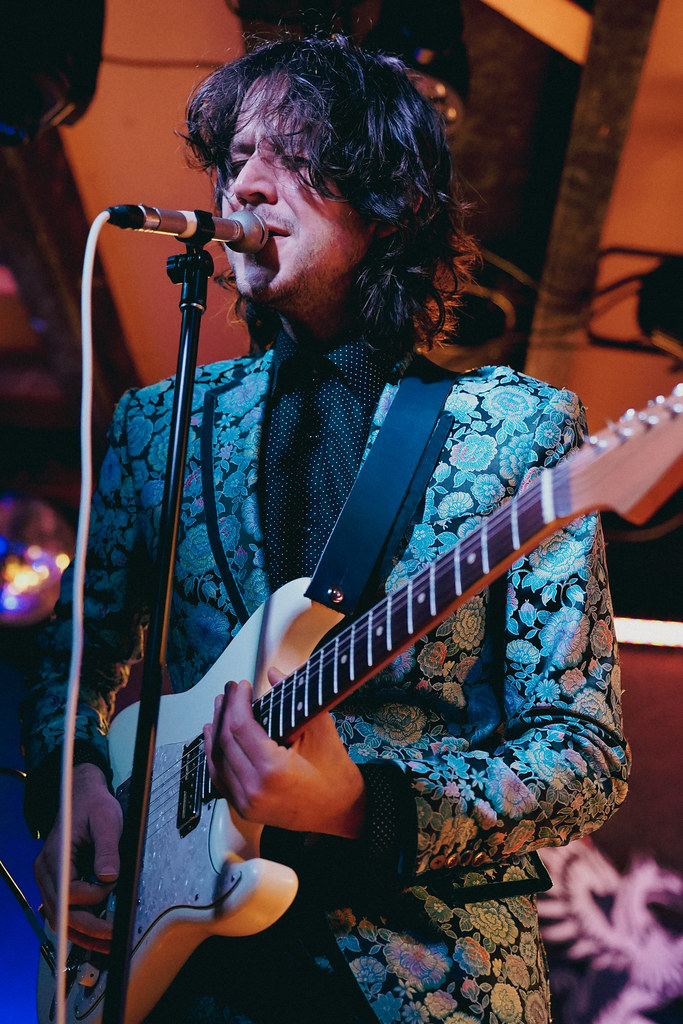 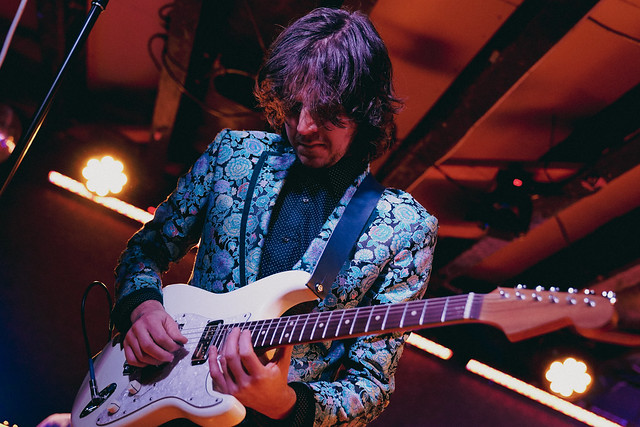 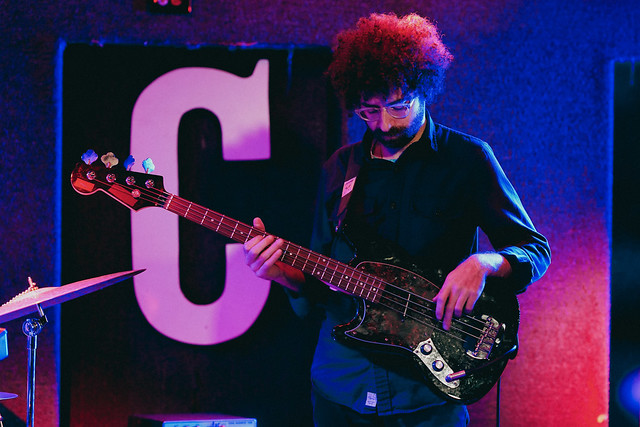 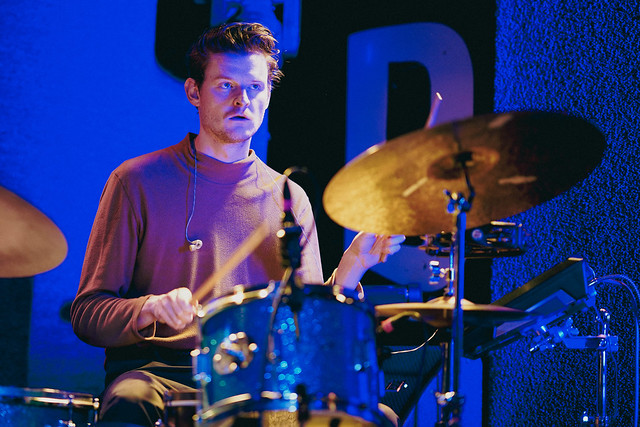 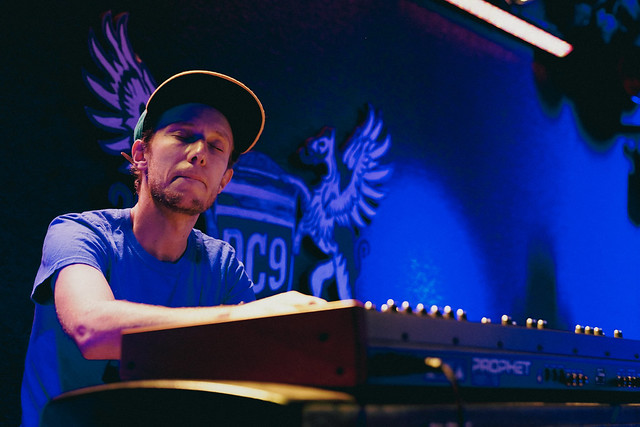 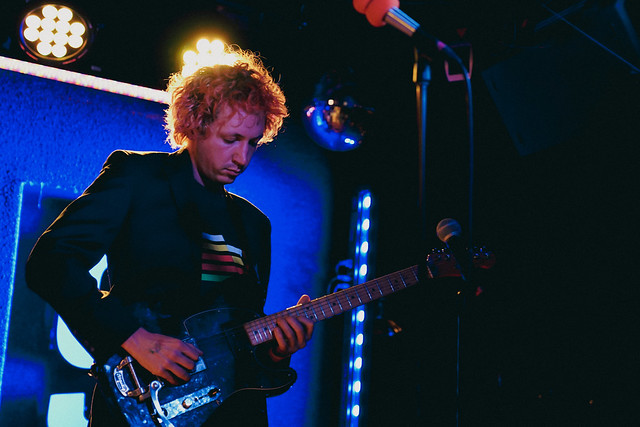 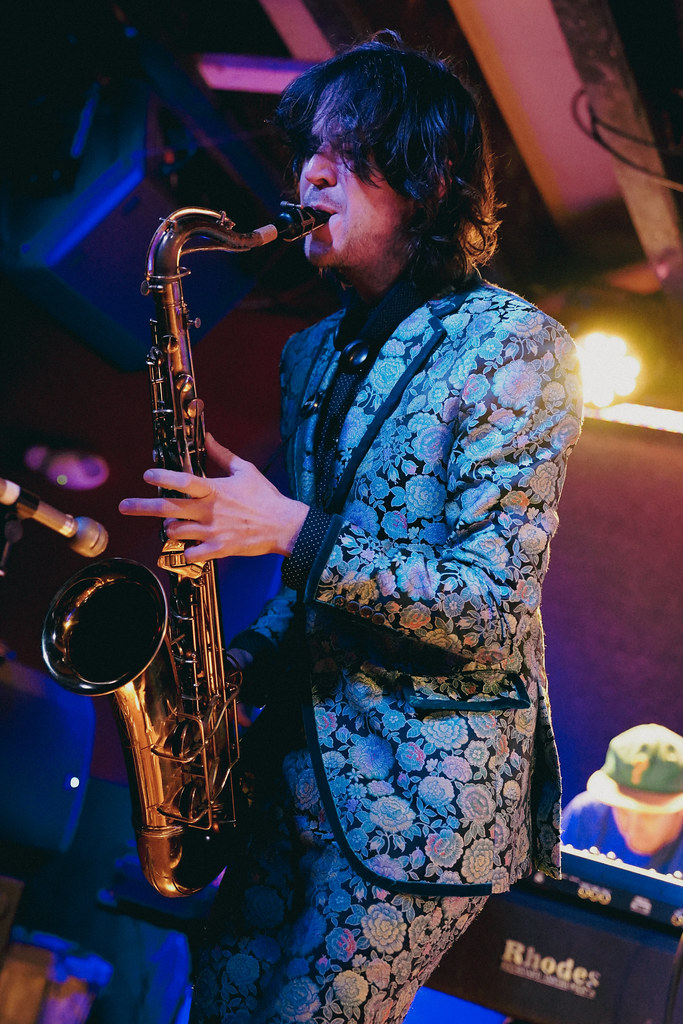 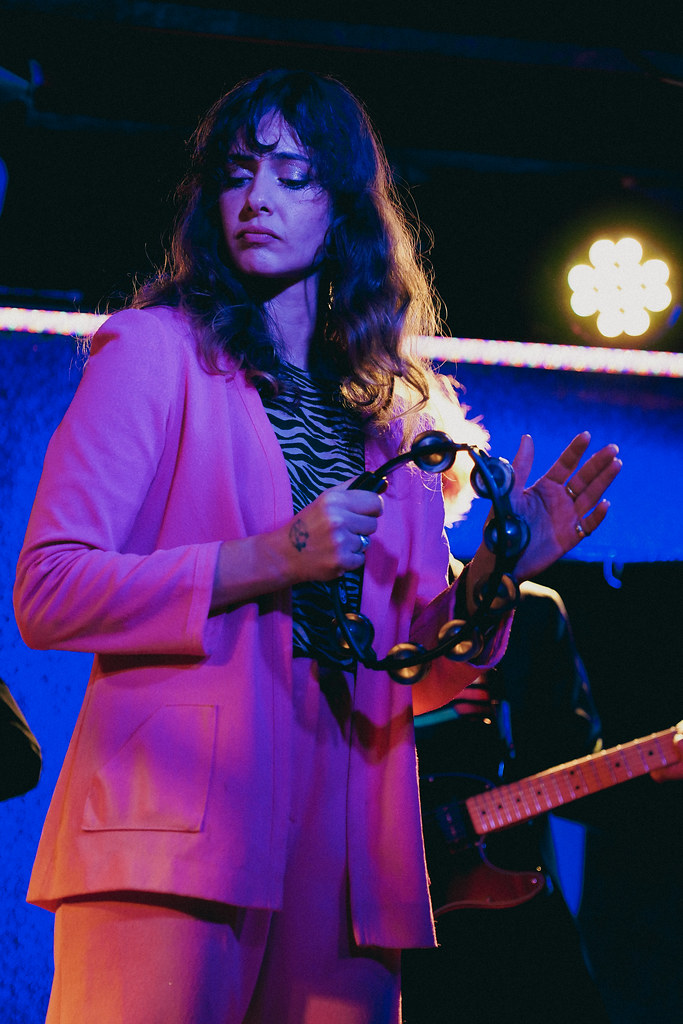 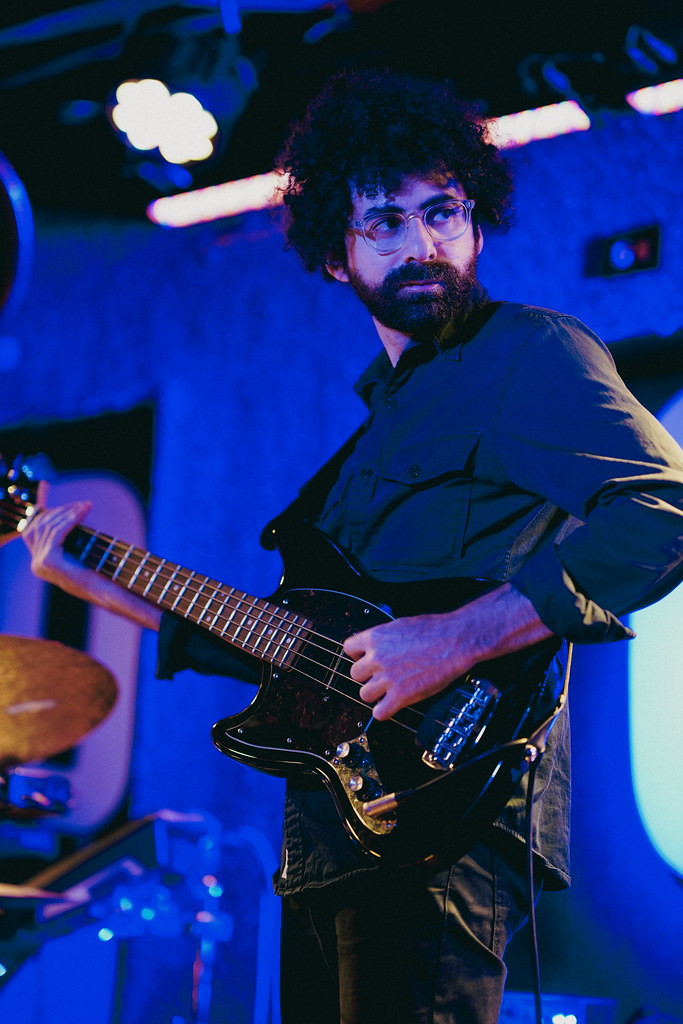 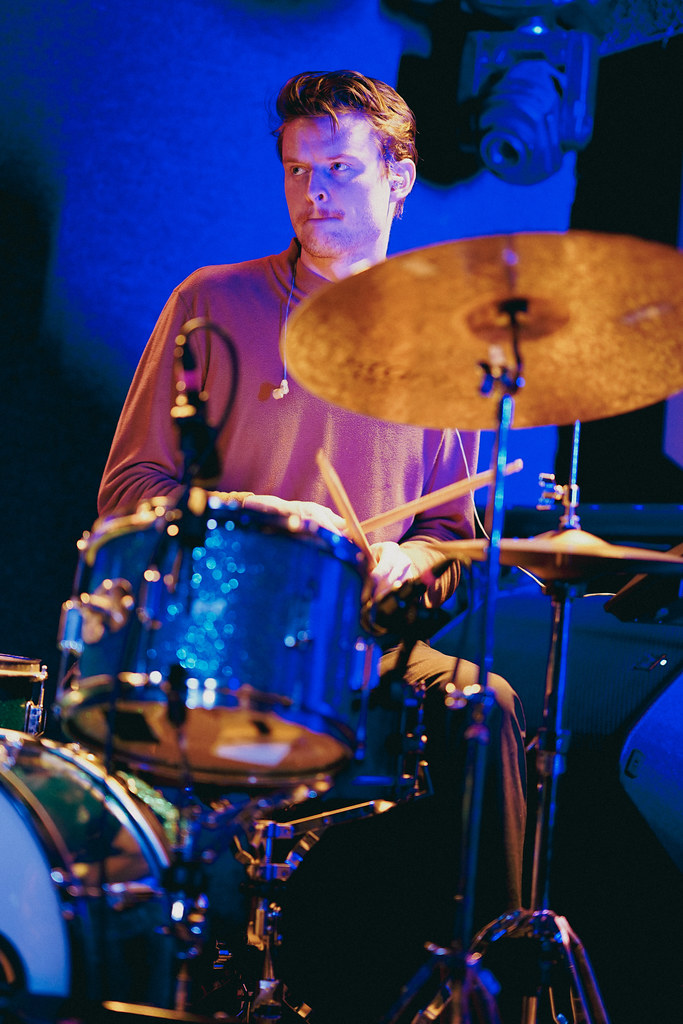 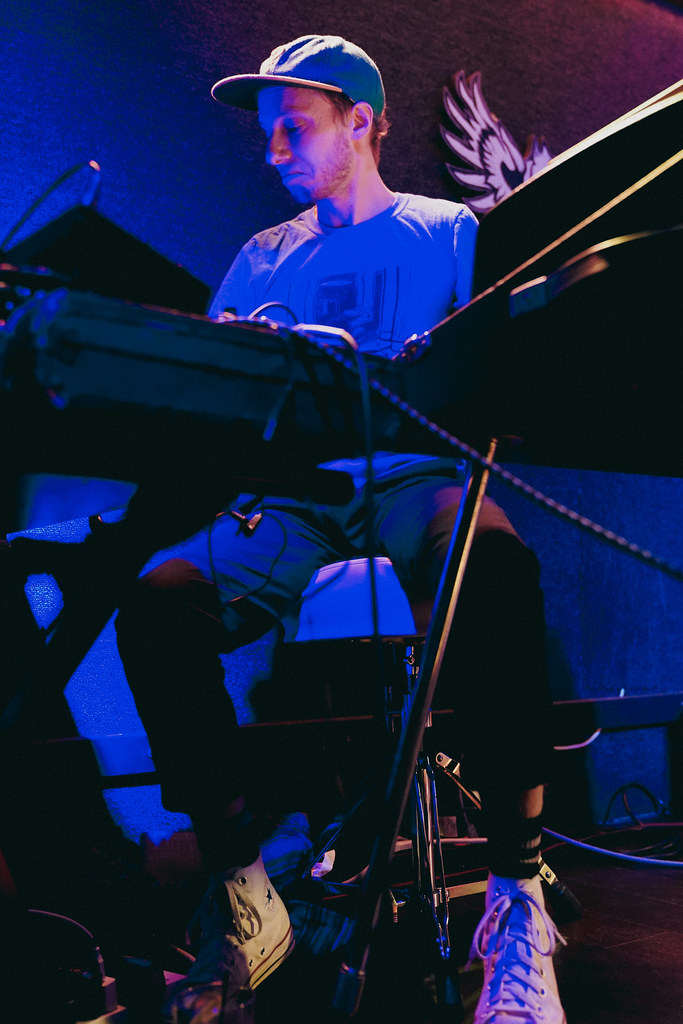 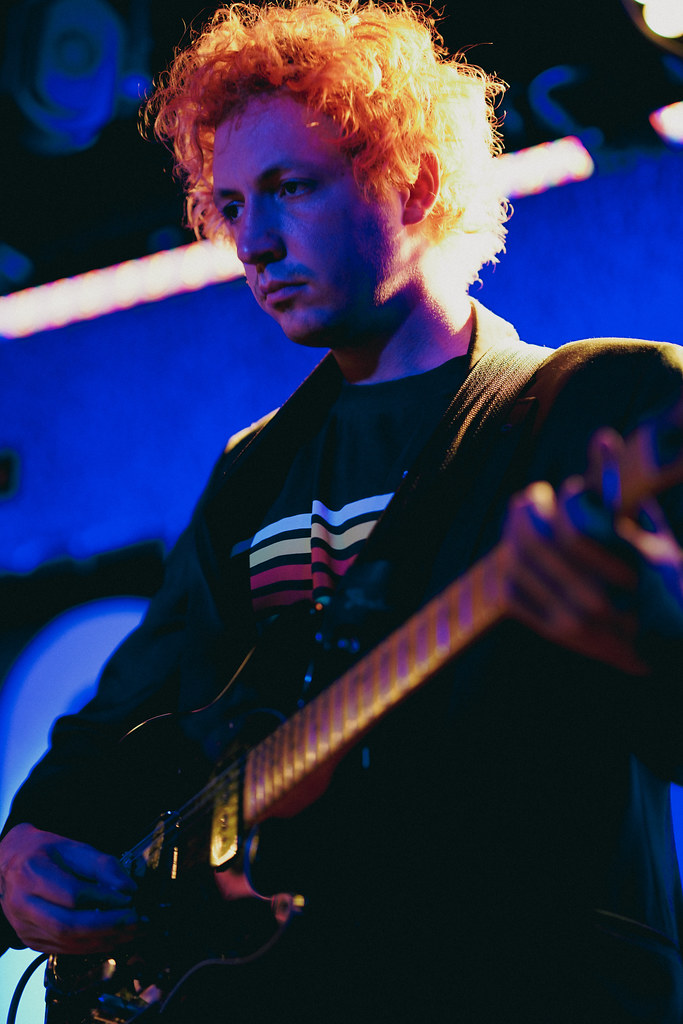 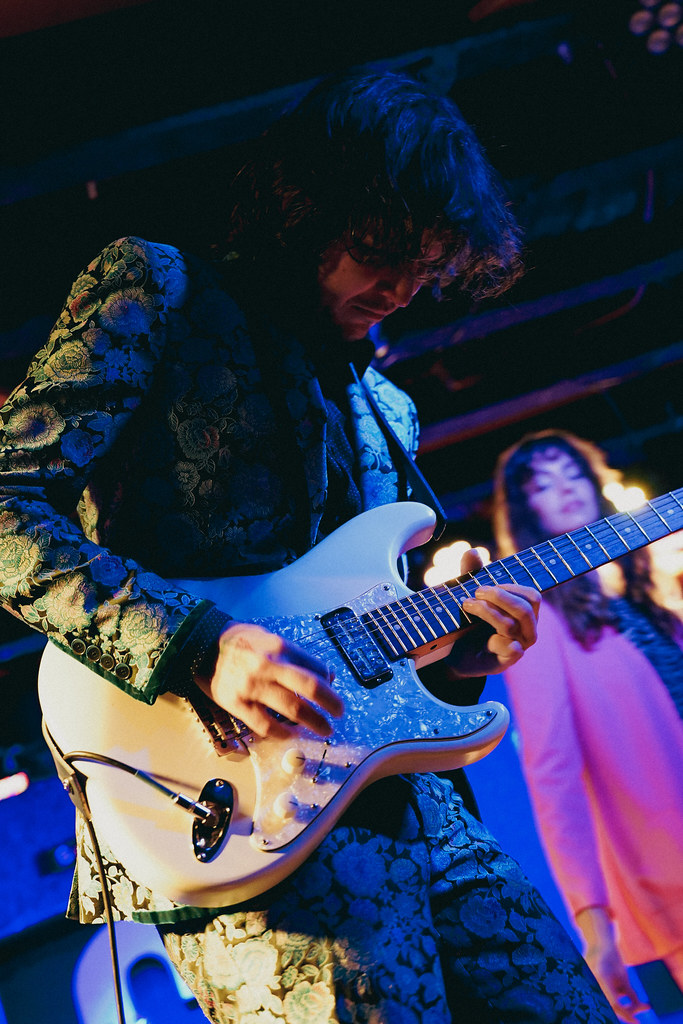 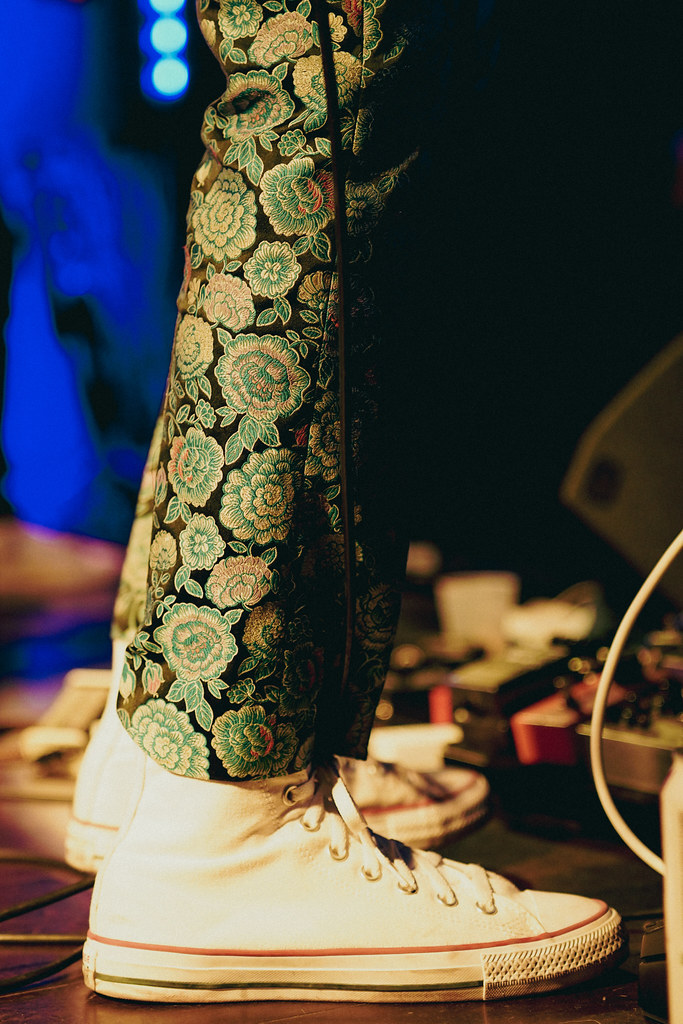 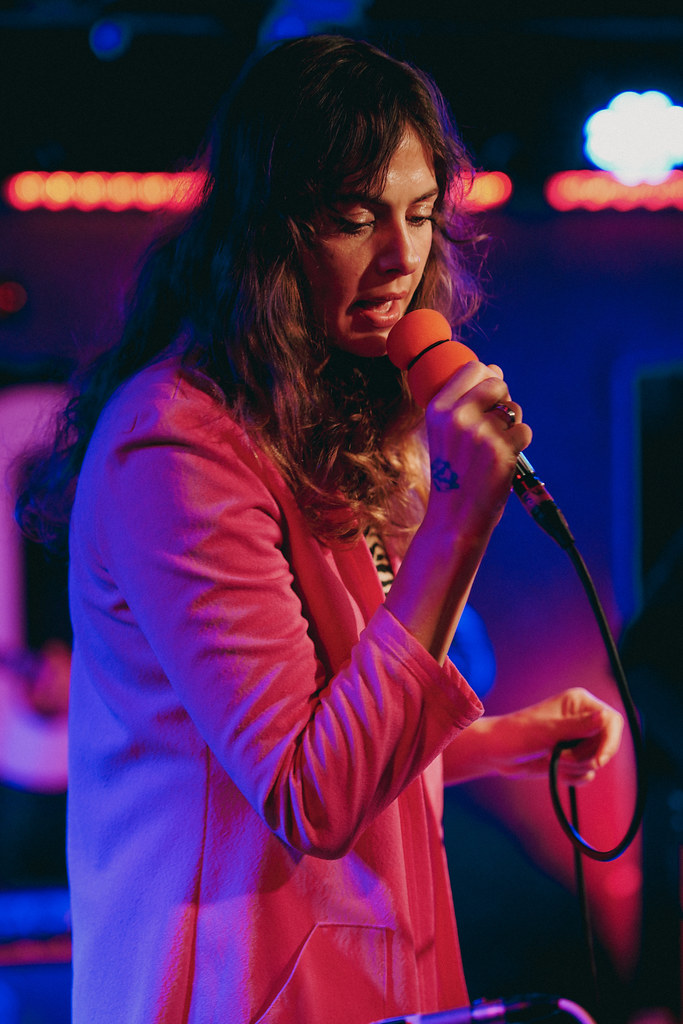 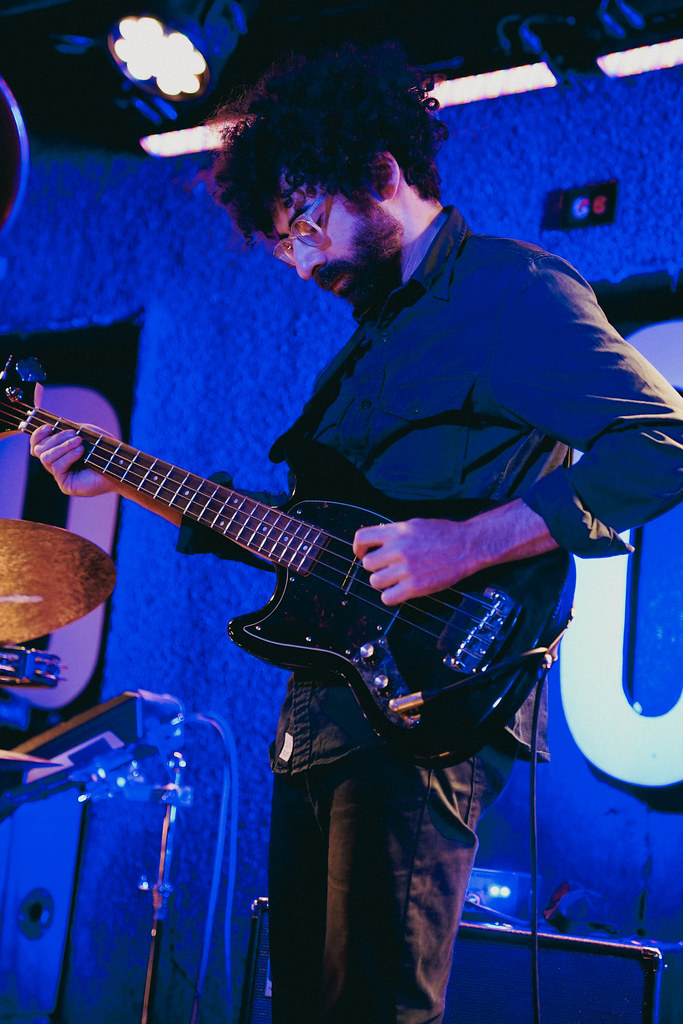 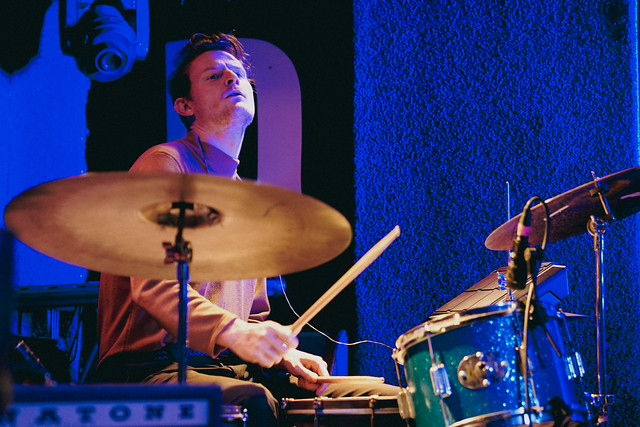 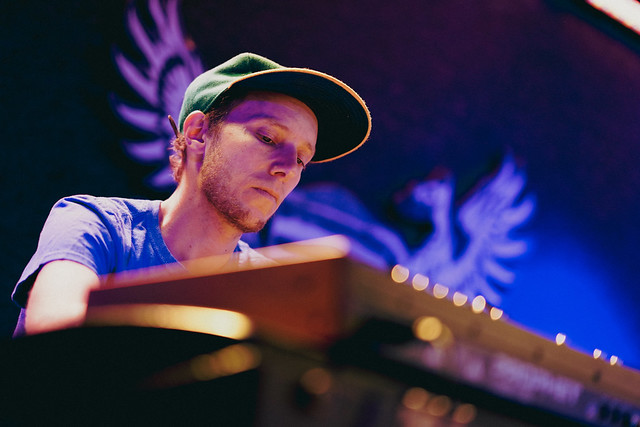 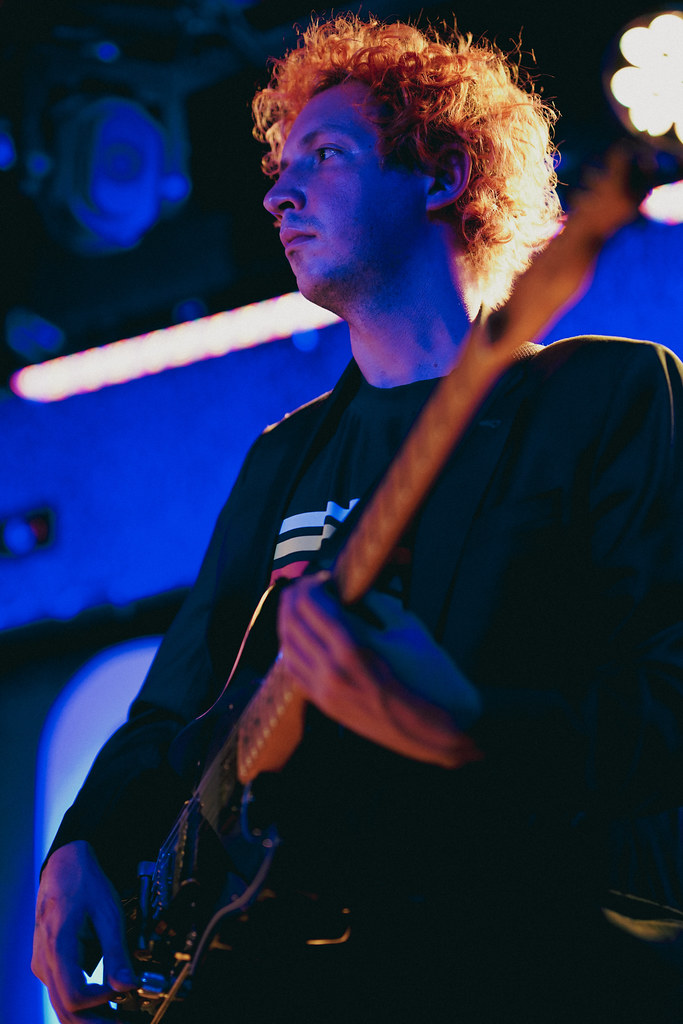 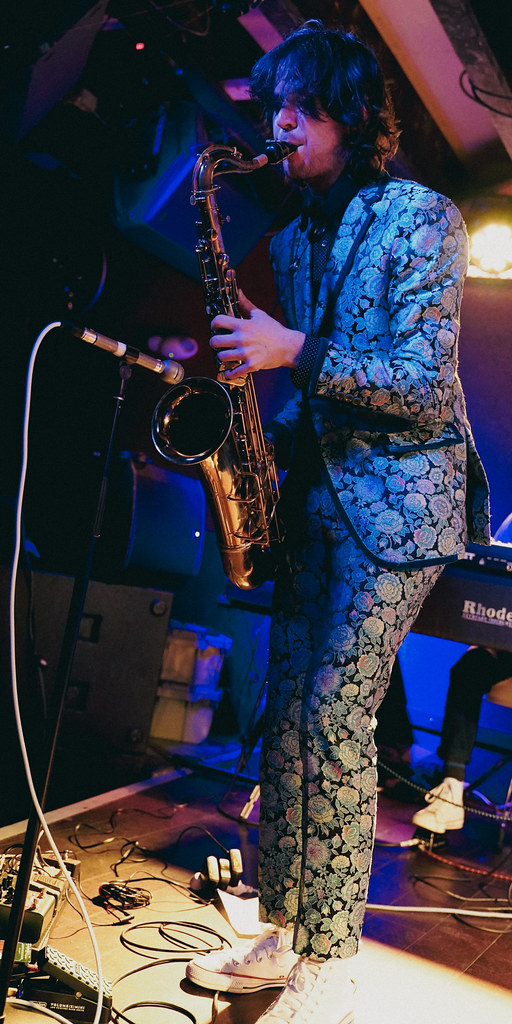 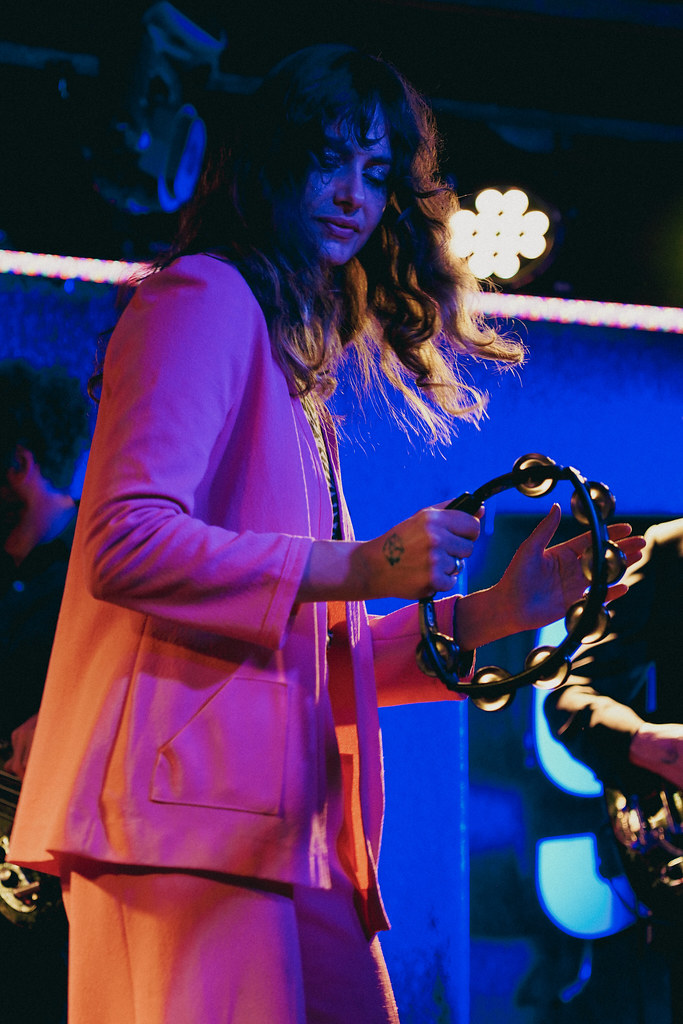 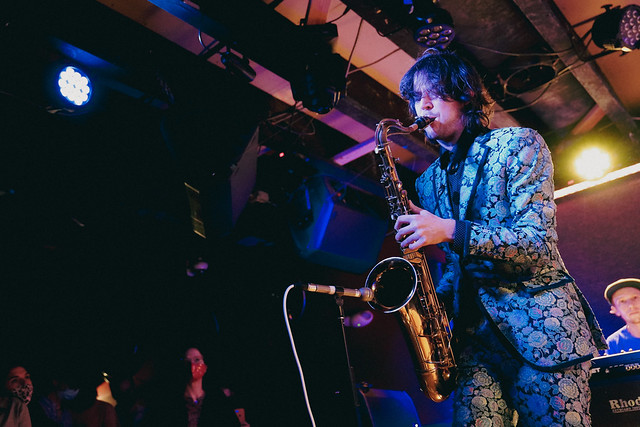 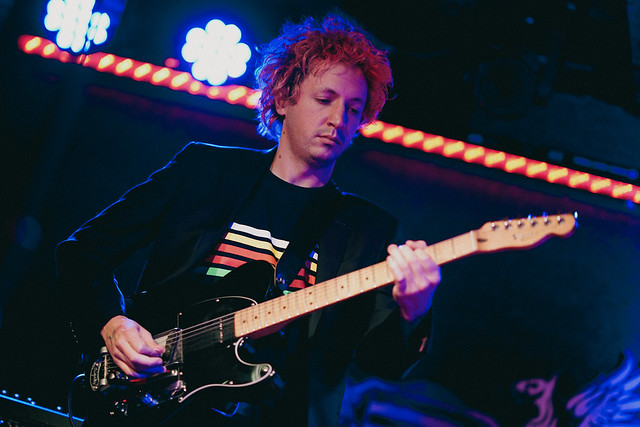 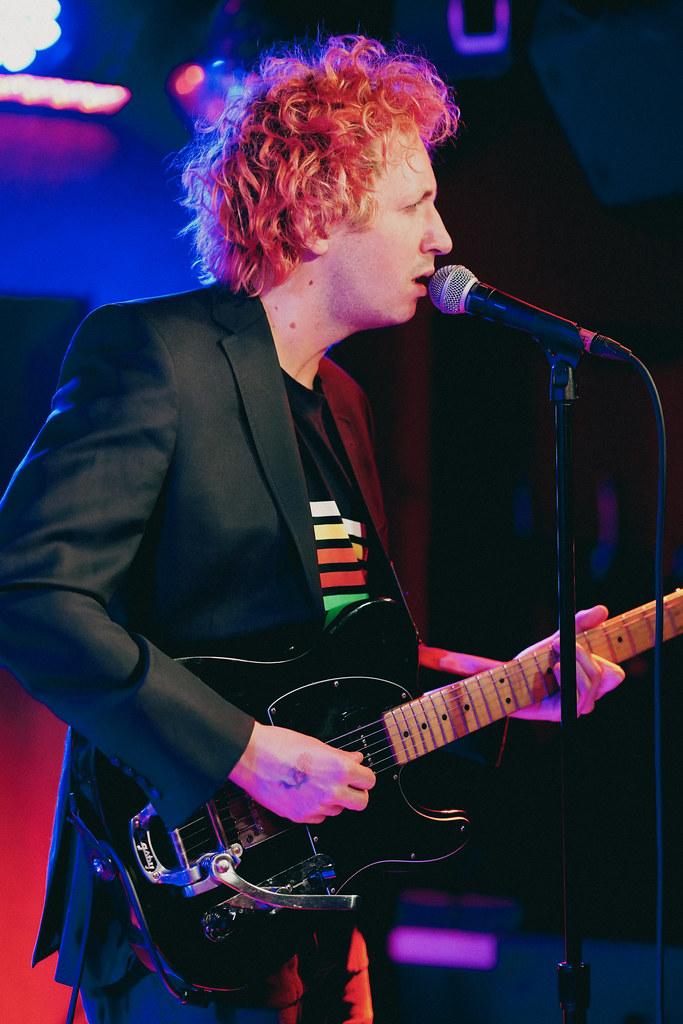 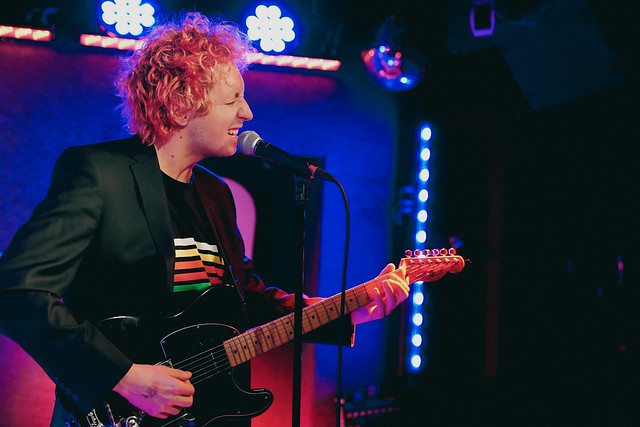 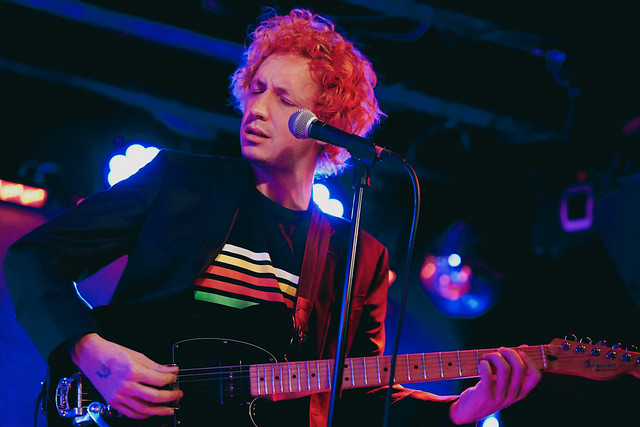 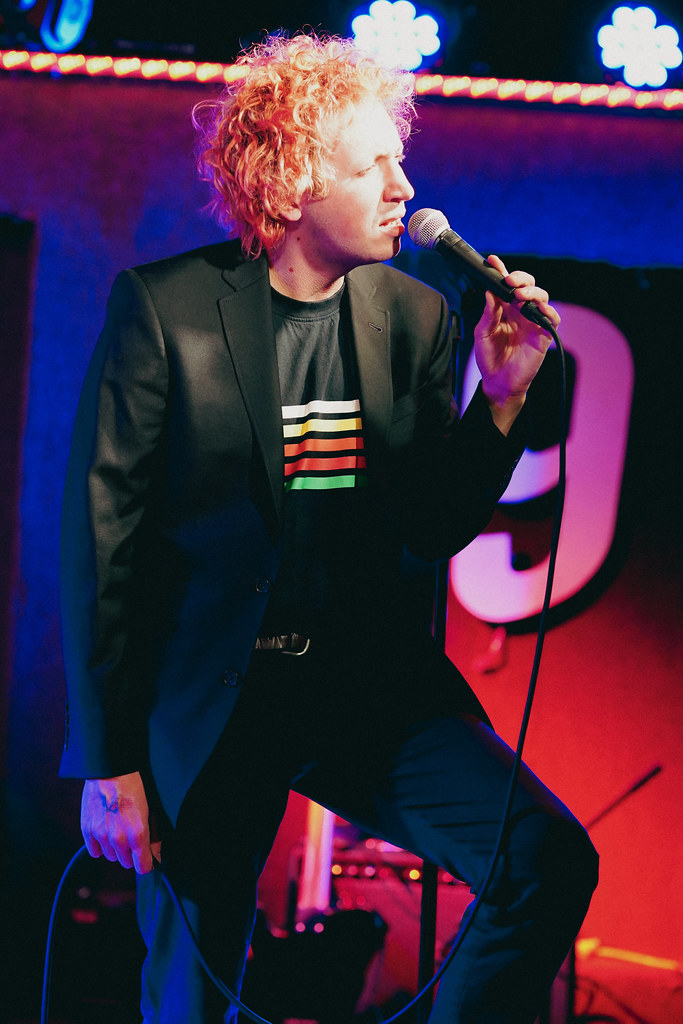