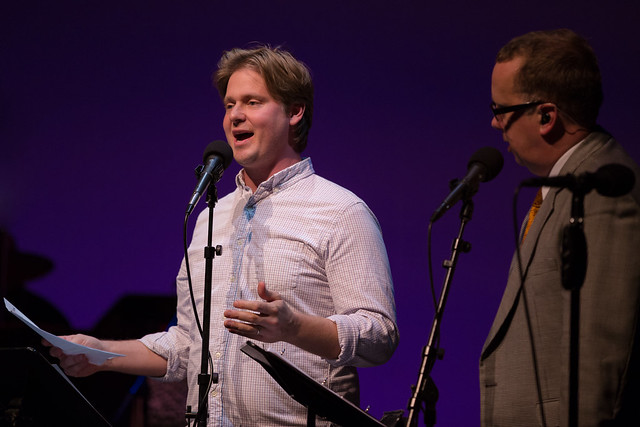 Tim Heidecker performs at The Fitzgerald Theater in St. Paul, Minnesota, on Dec. 5, 2013. (Photo by Collapse the Light)

Tim Heidecker for San Bernardino County Distric Attorney! Tim Heidecker for San Bernardino County Distric Attorney! Candidate Timothy Heidecker is introduced by electronic dance music sensation DKR. He proudly preached his stances on topical issues such as stopping medicare benefits for those who do not contribute to our society — like the bedridden and the elderly. Another pertinent platform being eradicating all crime from San Bernardino. Absolutely all of it. His Trump rally-esque attitude was shining through recently in an appearance at The Fillmore Silver Spring.

Comedian Tim Heidecker performed on Sept. 25 under the name of his podcast/youtube show with undoubted movie buff Greg Turkington, “On Cinema at the Cinema.” On Cinema has Tim Heidecker, a plausibly illiterate movie critic who doesn’t actually watch the movies critique films with Greg Turkington, who legitimately critiques the films with an occasional accompanying tangent of related movie facts. The films are then awarded up to five popcorn bags, unless they are exceptional movies such as Ant Man and the Wasp, which earn six.

Although this performance was under the name of “On Cinema at the Cinema,” only a few of the skits were related to that webseries. There were appearances of a number of Tim’s projects such as the action thriller spy movie Decker and face-melting rock band Dek Kar.

After Tim’s electoral speech running for DA of San Bernardino County, Greg Turkington gave a talk entitled “Oh Good,” which was an informative look on the lives of the cast of the 1977 religious/fantasy film “Oh, God!” from right after the film up until their deaths.

Following Greg’s talk was a heavy acoustic rock performance from Dek Kar. Their frontman Tim carried the band with his feeling of the music, and ostracized guitarist Axiom for not feeling the music as well. The precipice of the set being the shredding highly technical guitar solo from Tim that at its worst could be described as Eddie Van Halen on his absolute best day. The precision and finesse of his playing style unmatched by the masters of guitar.

Tuesday night was also the first running of Decker: The Play, starring Tim Heidecker, Greg Turkington, Joe Esteves, Axiom, and Manuel. The President of the United States of America played by Joe Esteves is kidnapped by two nefarious terrorists. Found locked in a cave with an uncrackable lock, Special Agent and master code-breaker Jonathan Kington, played by Greg Turkington, uses his immense film knowledge to crack said lock. Unfortunately, the terrorists return before they were able to escape and special agent Kington gets away. Luckily, through the audience, Special Agent Decker saves the day with a barrage of curse words and imaginary bullets. The play ends with President nominating Decker for Vice President!

The show concludes with “On Cinema Live!” The critics review and actually review the newest movies coming out at the end of September. The ending segment was a “Stump the Buff.” Audience members filled out question cards with movie trivia in attempts to stump Greg with hopes to win a $1,000 gift card to Carrabba’s. That’s right. $1000 to Carrabba’s… “that could feed a family of four every day for like a few months.” Audience members asked their questions in between 30-second long plugs for Carrabba’s, yet none could stump the buff.

I’ve had the opportunity to see Tim Heidecker perform with Eric Weirheim several years ago, and I was ecstatic to be able to see him again. His brand of humor definitely is not for everyone (hence why I went solo), but if you can appreciate slightly askew humor, I fully recommend anyone to check out any of his projects. Catch the latest on Decker on the series’ AdultSwim website.