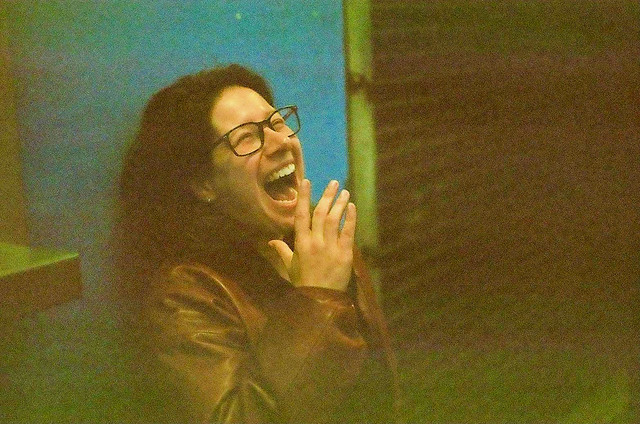 After a two-year hiatus, DC-based musician Rachel Levitin returned with a single, “Heavy,” and she releases the music video for it today!

The press notes for “Heavy” included a Q+A about the single, which Parklife presents here in its entirety.

HEAVY was written in April 2020. I was feeling the weight of the pandemic and stay-at-home orders early on and it was A LOT, as we all know. Life changed so drastically so quickly and songwriting has always helped me process feelings and distill emotions. This song is true to that. The song’s lyrics read, to me, like a diary entry. Those feelings of not being able to sleep, missing your friends and family, reminiscing on being out and about in the world doing things and celebrating in mass all while you have to stay at home is what this song is talking about.

We’re all feeling the weight of COVID on a global level to some degree. I like to think this song can help to soothe us a little bit.

If you could summarize the song in one lesson, what would it be?

One of my love languages is quality time. I crave it. Making memories with people I care about while in the pleasure of their company is something I cherish. This song is a written expression of my reflection on that. The lesson is always make time for the people you care about.

Who are you hoping this song touches or inspires?

I hope this song gives people who are feeling down, lonely, restless, or exhausted comfort reminding them that they’re not alone.

Watch the official music video for “Heavy” by Rachel Levitin on YouTube:

What other works are in the pipeline for you?

I have a new single I produced coming this spring that’s in the mixing phase at the moment. It’s a feel-good, up tempo song with a laid-back vibe, lots of guitar layers. It features several notable women from around the DC music scene including: percussion from Rhea Tucker, lead guitar from Courtney Tucker (the twin sisters are also members of the band Shelia), bass from singer-songwriter Jasmine Gillison, piano and background vocals from Mystery Friends lead singer Abby Sevcik, and engineering/mixing by Cati Sesana (drummer for RoseRiot, The Fuss, & The Perfectionists).

Next is wrapping up a demo to send to the band so we can record the next song with a goal release date for another new single this summer if we can swing it, I’m aiming for it. The ultimate goal is an album that, if we stay on track, we could release in late 2022/early 2023. Lots going on!

The production choices I made for this song were based on my love for a specific handful of early aught’s pop singer-songwriter releases from artists like Norah Jones, Sara Bareilles, Mandy Moore, Gavin DeGraw, and Rachael Yamagata. They each have wonderful examples in their song catalogs from the early/mid 2000’s of intimate piano ballad releases with minimalistic, acoustic instrumentation that features delicate, exposed lead vocals in the arrangements. I was heavily (no pun intended) influenced by those artists on this one.

My favorite mentions of this release came by the way of friend and fellow DC area singer-songwriter Annie Stokes on Instagram. She said, “[I] Wish the OC was still on so [Heavy] could play in the background while someone stares at the ocean.”

Funny enough — 1) Rachael Yamagata had a few songs on the OC … and 2) I have the first two seasons of The OC on DVD … so, I feel like what Annie said nails it. It’s now my favorite way to describe the song. If The OC was still on, I’d absolutely want this song included on the show. It’s introspective and nostalgic. It makes you think. I love that.

3 thoughts on “Song of the Day: “Heavy” by Rachel Levitin”