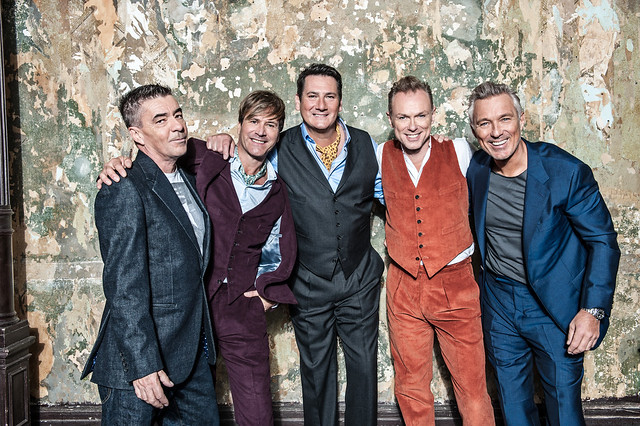 They are the most significant band never to perform in Washington, DC.

But against the odds, they are about to rectify that situation in what could be the concert of the year. I say against the odds because the five members of Spandau Ballet notoriously split after a falling out with band leader Gary Kemp for decades, last touring North America in 1983.

Last year, the reunited Spandau Ballet hit their first shows on the U.S. west coast after their hiatus, and this month, they are returning to tour the east coast. The tour includes a stop at the 9:30 Club on Tuesday, April 28, and in a video message from London on March 27, lead singer Tony Hadley made it clear, saying on the 9:30 Facebook page: “It’s the first time we’ve ever played in Washington!”

But the most significant band never to perform in DC? Really, Mickey?

Well, yes, I think so. Spandau Ballet came together in 1978 during a tumultuous time in London as the poster band for the New Romantic movement, a group of club savants who valued sexy sophistication and optimism as an antidote to the grit and pessimism of some of the punk bands at the time. The cultural movement and resulting music genre had its roots in the glam rock of David Bowie and Roxy Music, and its flagship bands came to embrace smart suits and synthesizers.

Spandau Ballet started out as the house band for Ground Zero of this movement, The Blitz Club, run by Steve Strange. They quickly got to work on powerful dance albums, the first two of which were produced by Richard James Burgess, who is now a DC-area resident who has taught at the Annapolis Music School and The Omega Studios’ School of Applied Recording Arts and Sciences in addition to serving as director of marketing at Smithsonian Folkways, the nonprofit record label of the Smithsonian Institution.

After years apart, the band reunited in 2009, and I flew to Glasgow to see them at S.E.C.C. on Oct. 27, 2009. They were in fine form and high spirits, and they easily lived up to the hype generated by the legacy of their original six studio albums and resulting cultural dominance. Spandau Ballet are every bit as worth seeing in concert as their friendly rivals Duran Duran, with whom they share the ideals and banner of the New Romantics.

Spandau Ballet’s current world tour is inspired in part by a documentary covering their career and reunion, Soul Boys of the Western World. As the title of this post says, don’t miss this show! (An opening act has yet to be confirmed, but with any luck, we may get DJ Rusty Egan, the world-famous Blitz DJ and drummer for the band Visage, who has been supporting them in Europe recently.)