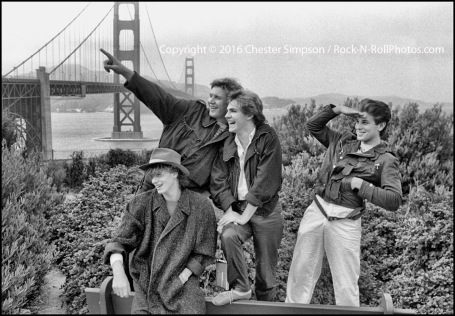 Christmas is the season of giving, charity, and good will toward all men. Duran Duran are the band of style, optimism, and really good parties. The two go very well together, don’t you think?

And so it is that Careless Memories: A New Wave Party will celebrate Duran Duran at the Christmas edition of our dance party on Thursday, Dec. 8, at Dodge City. Join us for an evening of amazing new wave songs as Duran Duran Save Christmas.

Watch the official music video for “New Moon on Monday” by Duran Duran on YouTube:

The timing of our party is inspired by the surprise announcement of Duran Duran concerts on New Year’s Eve and New Year’s Day at MGM National Harbor. (Read our Parklife DC preview!) Of course, Duran Duran came through town on their Paper Gods Tour at the Verizon Center back in April. (Read our Parklife DC review and analysis of why they are so great with disco-master Nile Rodgers.)

When you attend our holiday party, Duran Duran Save Christmas, you’ll dance along to an extra dose of new wave tunes from Birmingham’s brightest stars –- Duran Duran! Alongside Simon Le Bon and company, I’ll play some of their contemporaries in bands like Spandau Ballet, Japan, Culture Club, Simple Minds, the Eurythmics, and Adam Ant (who’s visiting DC in January!). You can also count on hearing a little bit from Duran Duran influencers like David Bowie, Roxy Music, and CHIC.

Admission is free. RSVP on Facebook, or simply show up and say hello! (And what an opportunity to introduce yourself: We are named after a Duran Duran song after all.)

For more from our fantastic photographer friend Chester, visit http://www.rock-n-rollphotos.com.