#DCBEERBATTLE for Charity at Roofers Union (6:00-11:00pm)
Whichever keg of local DC beer kicks first, that brewery donates to the charity of their choice.

And if you want to learn something while you drink…

How Government Affects Your Beer at Bluejacket (6:00-8:00pm)

For all events today and this week, visit: http://dcbeerweek.net/ 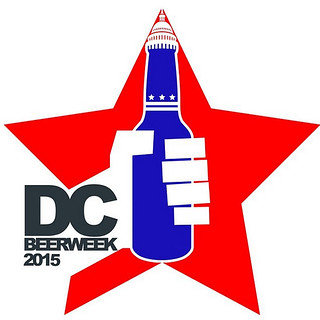 From the Press Release:

‘Craft beer fans, rejoice! The 7th annual DC Beer Week returns to the National Capital Region this summer with a variety of educational and tasting events planned throughout the week of August 9-16, 2015.

“The DC beer scene has grown by leaps and bounds in recent years because of breweries (local, regional, and national), bars, restaurants, bottle shops, distributors, and, most importantly, beer fans,” says 2015 DC Beer Week co-chair Bill DeBaun. “DC Beer Week is a celebration of our local scene and a chance to continue that growth.”

As in past years, dozens of venues in the District, Virginia and Maryland will host a variety of events,including beer dinners, tastings, tap takeovers, and more. Restaurants, bars, breweries, and other venues interested in participating in this year’s DC Beer Week should contact the DC Beer Week organizers at dcbeerweek@gmail.com for more information.

This year, DC Beer Week will kick things off with a massive event that will bring together 20 of the region’s best breweries. Brewers on the Block will take place on Sunday, August 9 at Suburbia at Union Market. The day-time event will have all the same fun as the event by the same name in 2014, but much, much bigger. Tickets start at just $30 and will be available soon through DCBeerWeek.net.

More information about the 7th Annual DC Beer Week will be posted at http://www.dcbeerweek.net in the coming weeks. In the meantime, be sure to “Like” the DC Beer Week Facebook page and follow us on Twitter and Instagram (@dcbeerweek; #DCBW2015) for the latest updates.’

Local distributor Jeff Wells and chef/beer aficionado Teddy Folkman started DC Beer Week in 2008 to celebrate the small, but enthusiastic craft beer community in the Nation’s Capital. Since then, the event has grown each year, attracting thousands – from self-proclaimed beer geeks and homebrewers to the causal beer drinker. In 2014, the event included over 100 different events throughout the District and surrounding area.