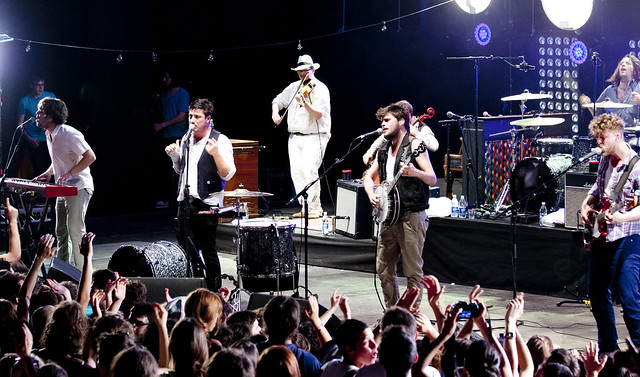 I’m a fan of Mumford & Sons. In fact, I like them. Actually. Not in a general sense.

It wasn’t always so. When I first heard of them in early 2010, on a recommendation from a British friend, I listened to a few songs but didn’t ‘get it’. It was just another band, albeit one with banjos.

Until I caught them live at Lollapalooza in Chicago that same year, it suddenly hit me. This is a great band. Their music is inspired when live, especially when playing “Little Lion Man” and “The Cave”. The crowd energy was off the charts. So I gave their first album, Sigh No More, a full listen. The rest is history.

I was also pleasantly intrigued when I heard the tragic, “After the Storm”, on the closing credits of the short-lived TV series, Stargate Universe.

Much has been made of Mumford & Sons third album, Wilder Mind. As a departure from their roots. As embracing a more mainstream approach to rock and roll, and setting aside the folkiness of their banjos. That they no longer had a unique sound.

What do I think of Wilder Mind? I gave it a listen, then did the true litmus test and witnessed Mumford perform live at Merriweather Post Pavilion on 6/10/15. With a maximum capacity crowd in full-throated cheer. On a beautiful night.

Mumford & Sons were all in on their new material. They played nine new songs in the 20-song set.

Often, when you hear new songs live from a band you enjoy, it doesn’t have the same cachet and familiarity, and therefore doesn’t immediately resonant or move you.

Not so with Mumford & Sons. The new songs in Wilder Mind fit perfectly with their sound and who they are. Minus the banjos. And really, so what?

From the furthest reaches of Merriweather’s lawn, we were able to take in the spectacle of humanity that came to revel in what Mumford & Sons had to offer.

Five of the first seven songs were from Wilder Mind. From the self-doubt in “Believe”, the first single, to the anthemic build in “Broad-Shouldered Beasts” the songs never felt out-of-place or un-Mumfordlike (to coin a phrase). Later they sang about last chances in love in the peppy “Tompkins Square Park” and the head nodding “Ditmas”. Both among their strongest new songs.

They did get around to the crowd favorites, “The Cave”, “Little Lion Man” and “I Will Wait”.

They ended the show with “The Wolf”, the second single from Wilder Mind, and possibly the most rock and roll sound they’ve achieved.

What do I think of Wilder Mind? I like it, but it’s still not as strong as their origins in Sigh No More. It is, however, better than their second album, Babel.

What did I think of the show? Excellent.