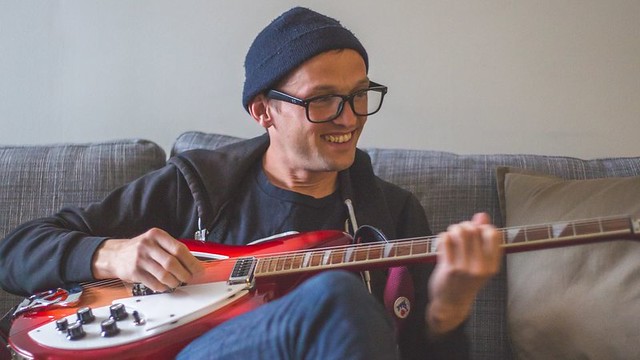 Mikey Erg is a punk-rocker from New Jersey who plays some furious guitar!

And the prolific punk released his debut album recently — Tentative Decisions via Don Giovanni Records. He did so after performing with a mess of other bands, including The Ergs!.

On the second and latest single from the album, Mikey spits about lost love in a track called “Apart Time.”

The first track from Tentative Decisions was the mocking, clever “Comme Si About Me,” a play on words referencing the French phrase for “like this.” I’m going to be bold and say that Mikey sounds a bit like a very young (angry) Elvis Costello on the track (and he strikes a similar figure with his lanky frame and glasses). Mikey is touring to support the album, and he comes to DC9 on Sunday, June 26, filling out a big bill as an opening act for Hemlines.

Remember how we said Mikey is prolific? Well, Mikey is also the drummer for Worriers, a post-punk band fronted by Lauren Denitzio, and Worriers also are opening for Hemlines. Worriers released a new record Imaginary Life last year via Don Giovanni.