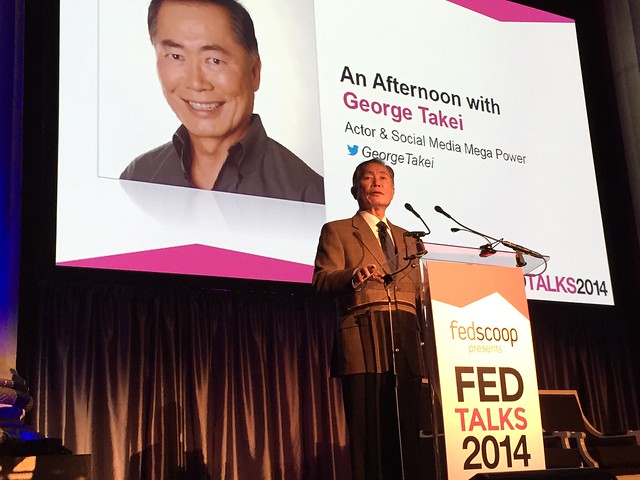 When the opportunity came, Takei was able to discuss the internment of Japanese Americans during World War II on his social media platforms, and eventually his musical, Allegiance. The producers of Allegiance staged it initially at the Old Globe Theatre in San Diego, where it broke attendance records and won recognition as best musical from the San Diego Critic’s Circle.

“It’s a story that takes place during a dark chapter of American history that most Americans still to this day know nothing about,” Takei said of Allegiance, which follows the story of a family of Americans forcibly relocated from their home in California to an internment camp, and what follows for them.

Takei recalled with particular disgust the questionnaire given to male Japanese held at the camps. To ascertain their fitness to join the U.S. Army, they were given a questionnaire that asked them to swear loyalty to the United States of America and to foreswear allegiance to the Emperor of Japan.

“For the government to assume to assume we had an inborn genetic loyalty to the Emperor was offense. We are Americans,” he declared.

Takei was proud of his parents for answering no to the questionnaire because they had no loyalty to Japan to foreswear.

On a happier note, Takei expressed his gratitude to his fans who embraced awareness of the issues raised by the musical Allegiance and supported it.