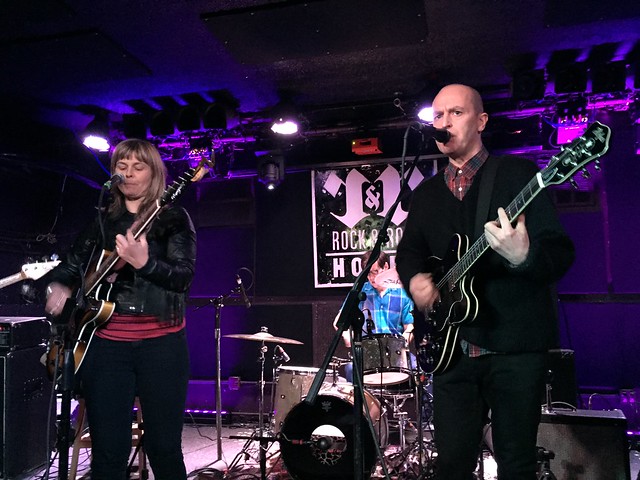 Frances McKee and Eugene Kelly of The Vaselines

“I have only one question for you,” Frances McKee of The Vaselines told the audience at the Rock and Roll Hotel in DC Wednesday night. “Where is the White House?”

McKee related a tale of trying to find the location of the presidential mansion as a tourist that day, but getting lost for about 90 minutes, then trapped in the Metro system, leading her to hop a turnstile to get home (without seeing the White House).

“What did you do today?” she asked her bandmate and longtime acquaintance, Eugene Kelly.

“I didn’t get lost and then break the law!” he proclaimed.

“He stayed in hostel room all day,” McKee said to the audience, “–wanking!”

“I saved enough for your face later,” Kelly quipped.

The exchange was representative of the humorous banter of potty language exchanged between the two longtime friends and former lovers from Glasgow who make up the core of Scottish punk band The Vaselines. The occasionally course language is somewhat more startling because the two otherwise seem so damn polite. I mean, really. They are sharply dressed, soft-spoken and well-mannered but spit out jokes about sex left and right.

The Vaselines, technically a quintent, released their new album “V for Vaselines” last October on their own label and played to a pretty big crowd at the Rock and Roll Hotel in support of it. Clearly familiar with the band’s career, the audience generally really got into the set, applauding enthusiastically or laughing at off-color jokes when appropriate.

The new songs generally run 2.5-3.5 minutes and they are melodic and catchy. The first song from the new album, “Hide Tide Low Tide,” was a winner. An upbeat Kelly sings of trying to figure out what is going on in a relationship as if it were an ebbing tide and the snappy guitars empower the song with a great dance beat. It sounds like an instant classic when you hear it, and indeed you wonder if you didn’t already hear it sometime 30 years ago.

The official video for “High Tide Low Tide” does a good job of showcasing the band’s playfulness:

McKee takes over primary vocal duties on the new album’s “Earth Is Speeding,” an ode to the speed of living (contrary to those moments that seem to last forever). It’s an amazing little song with fast guitars recalling 70s punk bands from New York City. And it’s just a wee bit glam.

The Vaselines famously started in the 80s only to break up after a few EPs and their first full-length. And the band didn’t forget its early material in Wednesday’s show. They played “Sex Sux (Amen),” a send up of religious righteousness regarding copulation, giving Kelly a chance to really dig into his irreverent young punk roots. And they closed the main set of their performance with “Son of a Gun,” a song covered by Nirvana in the 90s after the breakup of The Vaselines, propelling the band into public consciousness — surely, a song to highlight after their reunion in 2009. It’s an easygoing sunny song that allows the duo vocalists to trade off in admiration about a good friend who brightens your day.

The Vaselines were accompanied by opening act Amanda X, an all-girl trio from Philadelphia. Amanda X played a somewhat similar sort of punk guitar, albeit more spritely and spunky and thus much more poppy. Vocalist and bassist Kat Bean, vocalist and guitarist Cat Park, and drummer Tiffany Yoon make up a comfortably loose group very much at ease with their instruments, despite some professed nervousness.

Amanda X closed their set with “Guatemala” from their debut album, last year’s Amnesia. The selection is a sweet, sultry song dealing with theme common to their repertoire—nostalgia, lost love, finding yourself. Amanda X are extremely easy on the ears, and they put on a very pleasant performance overall.

Watch Amanda X perform “Nothing Wild” below for a Space Jams Session.

The Vaselines perform in Brooklyn tonight and the Boston area tomorrow while Amanda X opens for them twice more. They are definitely an entertaining bill to watch. The Vaselines then move on for a few dates in Canada before returning to U.S. cities like Chicago, Seattle and Portland (ending their tour at the Roxy on the Sunset Strip, West Hollywood). You won’t regret catching these wry Scot merrymakers while they are here, so go see them!