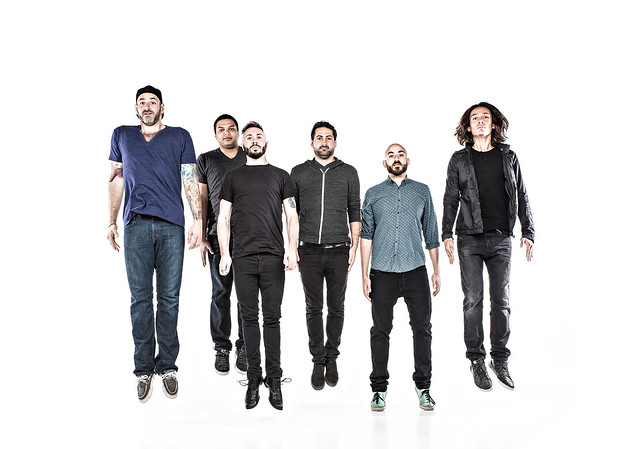 The Periphery (Photo by Jonathan Thorpe)

The band currently are on the Juggernaut tour on the West Coast (in Portland, Ore., tonight, and Seattle, Wash., tomorrow), and they play locally at The Fillmore (8656 Colesville Road, Silver Spring, Md.) on Friday, Feb. 13. (Buy tix online!)

Rolling Stone had a good word to say about the double album recently:

“The group’s most ambitious project yet, it features some of the band’s most accessible music; there’s plenty of the heavily syncopated Meshuggah-worshipping tech metal with which Periphery first made their name, but there’s also pulsing electronica, emo-inflected hard rock, spacey jazz-fusion and hooky acoustic pop – sometimes in the same song.”

The Juggernaut double album is the Periphery’s third full-length release since their debut album in 2010. Juggernaut: Alpha and Juggernaut: Omega tell the story of a character who is torn between good and evil.

“Given the nature and complexity of the Juggernaut story, we’ve actually done something different and exciting in regards to the release,” drummer Matt Halpern said in a press release. “Juggernaut is a story that is told through our music, and we want our audience to fully digest the whole experience. Because Juggernaut is very detailed and dense in terms of character development, peaks and valleys, climaxes and resolutions we’ve divided the story and music in two, in the form of two separate albums. Juggernaut: Alpha, the first part of the story, focuses on the back story and character development, while part two/album two, Juggernaut: Omega, focuses on some pretty serious and gut-wrenching events, taking you for a thrill ride along the main character’s complex journey. Although the albums are split in two physically, the story is only complete when the albums are digested consecutively, allowing the listener to recognize and hear the lyrical and musical overlapping themes, foreshadowing, and connected ideas.”

Buy “Juggernaut: Alpha/Omega” today on iTunes and all digital outlets!