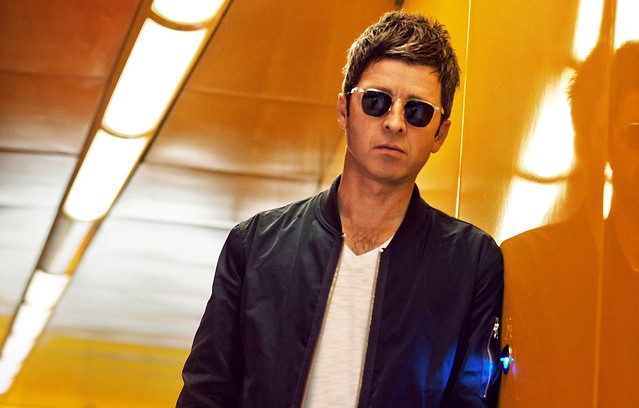 Before the encore Thursday night at the Lincoln Theatre, the crowd started chanting his name.

The sold-out theater was absolutely packed to the gills — and everyone was eager for more from the man they considered one of the top rock stars of all time.

When Noel Gallagher reemerged with his band, the High Flying Birds, the entire house erupted into cheers. But the man in the center of the stage struck a singularly humble pose and thanked the audience for their enthusiasm. He seemed a million miles removed from the chutzpah of the Britpop days that made him famous in Oasis, yet totally self-possessed of the moment, pleased to be received adoringly by those who came out to hear songs new and old.

He was happy to oblige them, and started his encore with Oasis’ “Masterplan” — a song which made the entire house dizzy with pleasure as they sang along every word in chorus.

Earlier in the main set, Noel showcased songs from the new album by Noel Gallagher’s High Flying Birds, Chasing Yesterday, released in February on Noel’s own Sour Mash label and recorded in part at Abbey Road Studios, long associated with his heroes in The Beatles. They hit the album’s highlights, including first single “In the Heat of the Moment,” a song appropriately a bit about the struggle to hold onto the past while living in the now.

The song demonstrates how well Noel plays — with focus and intensity. He may stay in place while he’s on his guitar, but his concentration is tremendous, and his furrowed brow as he belts out his lyrics reveals the passion he feels for his music. His mannerisms remind me of another famous guitar player — Johnny Marr! Musically, this number and others by Noel Gallagher’s High Flying Birds prove to be not only lyrically rich but instrumentally rich as well, as the five-piece High Flying Birds (including Noel) are surprisingly backed by a brass trio including trumpet, trombone and sax (technically a woodwind, yes).

Watch Noel Gallagher’s High Flying Birds perform “In the Heat of the Moment” in a London show for Absolute Radio on May 7, 2015:

The DC audience particularly showed its admiration for High Flying Birds’ songs “The Death of You and Me” from their debut album and “You Know We Can’t Go Back” from the new album. The first is a dependably psych number that actually expresses longing for getting away to a better place, despite with ominous word “death” in the title!

The song “You Know We Can’t Go Back” smacks pleasantly of blues-rock, giving it a slightly different sound than some of the other numbers by the High Flying Birds, while again themetically dealing with one’s inability to relive the past.

After those songs, Noel played the Oasis juggernaut “Champagne Supernova,” again dazzling the room, but on this occasion everyone was happy to listen rapturously as the band played the song through instead of singing over it.

Noel Gallagher’s High Flying Birds play at the Governors Ball Festival in New York City on Sunday, June 7, and then they are gone from these United States for the time being to continue their tour throughout Europe.

If you ever had a desire to see Noel perform, catch him at your earliest opportunity. He’s in good form — and if you loved Oasis, you’ll likely find he’s still your biggest rock star, too.