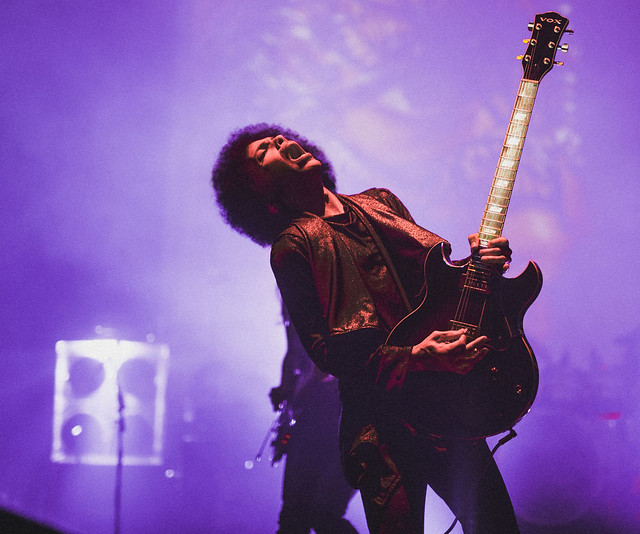 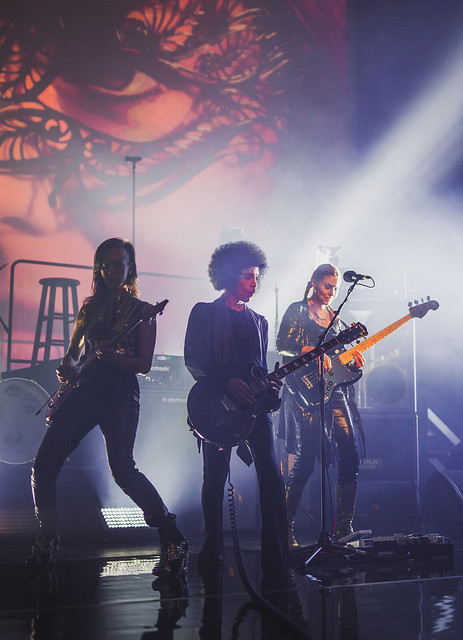 Seated in the back of a large stage setup, drummer Hannah Welton didn’t get as much attention as she deserved, but she rolled straight through more than two hours of performance in the late show Sunday. Hannah certainly keeps moving, and she does an amazing job of setting the pace for the rest of the band, which included up to eight other musicians at times in addition to Prince and 3rdeyegirl. Given the emphasis on percussive grooves in many Prince songs, Hannah was a delight for both Prince and the audience for not only getting the songs right but elevating them quite a bit. 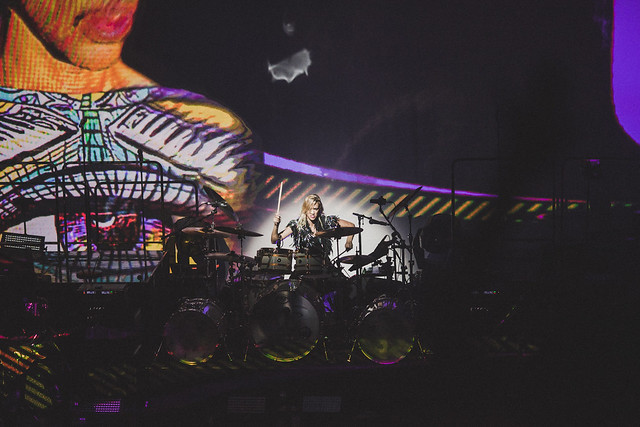 Hannah Welton on the drums at the Warner Theatre on June 14. (Photo by Karrah Kobus / NPG Records)

And bassist Ida Kristine Nielsen complemented Hannah in the rhythm section, always working well with her bandmates. The accomplished Dane put her entire soul into her performance, and that was most evident as she teared up with emotion during a surprise performance of “Superstition” by Stevie Wonder in the latter half of the show. Ida Kristine sounded wonderful, but she captured our hearts with the sheer joy she brought to performing alongside the legendary Mr. Wonder.

So yes, Stevie Wonder. Those of us at the late show received the surprise guest with rapturous applause. (And the early 8pm show missed out, I’m afraid.) Stevie actually snuck onto stage to take over keyboards at some point, perhaps around the time of “Controversy,” the title track to the amazing Prince album from 1981. Prince also performed “Controversy” (and many, many other hits) in Baltimore — but dammit, it’s not the same when you have Stevie Wonder sitting in on keyboards for you.

Stevie stayed on stage for the strongest segment of Sunday’s late show, rolling from “Controversy” to “1999” to “Little Red Corvette.” Prince himself was full of delicious swagger, and the audience ate it up. The man often took center stage during his performances, dancing up a funky two-step or thrashing away on his guitar while strident before his microphone. He was in good form, and he sounded fantastic and looked as fit as hell.

We at ParklifeDC were particularly pleased that our favorite lady Yasmin was called upon from our perch in the front row to sing along with Prince to “Raspberry Beret,” one of our favorite Prince songs ever, and then dance on stage with him and others for the next song or two. 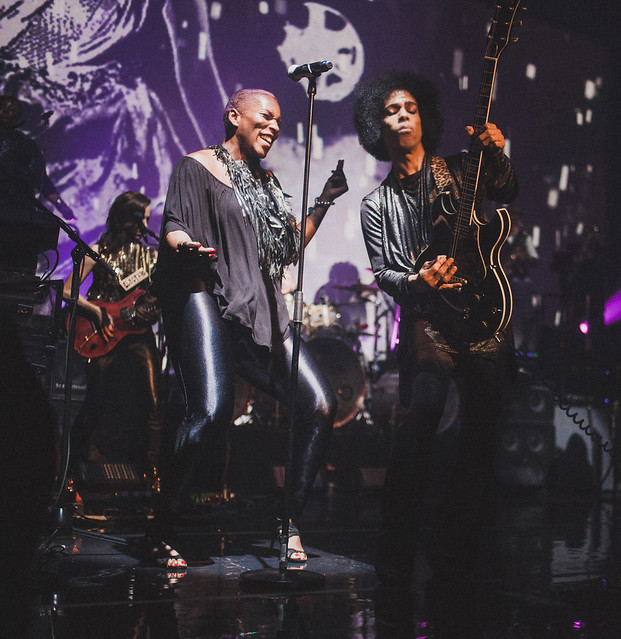 Prince gets soulful at the Warner Theatre on June 14. (Photo by Karrah Kobus / NPG Records)

Prince gave Stevie a proper introduction in the encore, which included a number of Stevie Wonder covers. Well, those covers began with “Superstition,” which was really just Stevie performing “Superstition” while everyone else sang and performed it with him, so it would be a bit of a misnomer to call it a cover. As the encore progresses, we also happily dance away to more of Stevie’s songs — “I Wish,” “Living for the City,” and “Signed, Sealed, Delivered I’m Yours.”

The final song of the night, however, is 100 percent Prince. The man from Minneapolis rendered a long and very psychedelic take on “Purple Rain,” during which he jammed out solo for a spell. The incredibly satisfied audience cheered him mightily and sang along to the heartfelt ballad, which Prince made as fresh as if it were only released yesterday.

Take a bow, Prince and 3rdeyegirl. You put all of yourselves into an absolutely tremendous show, which we would gladly see again and again. At this point, we would urge you to see them when they perform near you, but we don’t know when that will be! The nature of the Hit & Run tour is such that Prince announces the shows only a day or two before they go on sale, and then the concert occurs only a few days after that! So keep your eyes peeled perhaps if he hasn’t been to your city, and there’s a large concert space suspiciously empty on a prize performance night?

Prince and 3rdeyegirl’s setlist for 11pm show on Sunday, June 14 (from Setlist.com):