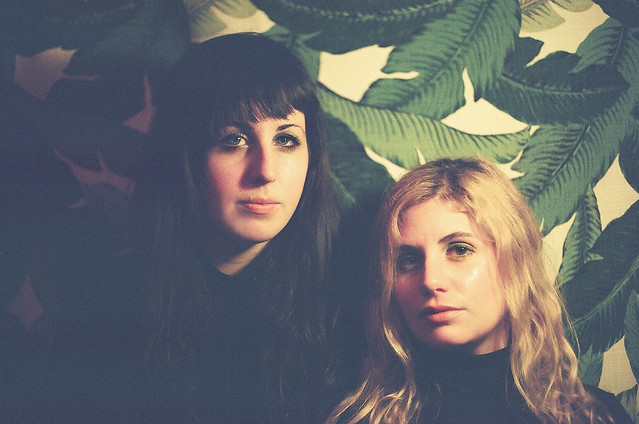 Along the 2500 block of Pennsylvania Ave. NW, several restaurants and bars catering to the local George Washington University crowd dot the street. On the north side, a New Orleans-themed place called the Bayou offers food and live music.

But to the left of the Bayou, you can open a door and walk into a residential building that seems a bit out of place for the upscale surroundings. It’s not exactly a tenement, and it’s not that you would feel unsafe there at all, but it’s odd.

I strode into the creaky building Monday night, walking past young adults eating edamame and drinking PBR along several flights of steps in order to climb to the top of the building for a visit to Above the Bayou, an apartment that has become a firm part of the DC DIY scene hosting “house concerts.” That night, the bill included DC bands Rom and Cool People and New York City bands Lost Boy ? and Sharkmuffin. I came specifically to see Sharkmuffin, a girl punk-inspired duo with some great surf guitar.

The room at Above the Bayou was crowded, and the temperature was a bit sweltering in the full house despite an air conditioner running in the apartment’s window. Sharkmuffin took to the space well, however, and guitarist Tarra Thiessen and bassist Natalie Kirch thundered through a 40-minute set with two members of Lost Boy ? backing them on a guitar and drums.

Tarra introduced their single “First Date” as a song about a bad Tinder date. “We’re all kind of on a Tinder date here together,” she quipped about the house party, and then she proceeded to scream and mosh her way through the crowd.

Listen to “First Date” and other Sharkmuffin songs on Soundcloud:

Soon, Tarra introduces “a song about our favorite color,” which is “Chartreuse,” and of course the title track from Sharkmuffin’s debut LP, set for release on August 7. (You can preorder the album online at iTunes.)

Prior to the show, I had the pleasure of chatting with Tarra about her band and about playing DIY house shows specifically.

Mickey McCarter: How did you get started in Sharkmuffin? And what is Sharkmuffin up to right now?

Tarra Thiessen: I always wanted to be in a band since I was really young, since I was like 12. I started playing guitar! I started singing when I was 19. I was always trying to be the guitar player in a band. I met Natalie in 2012. I was in a band with a different girl, who moved to back to North Carolina. Then I met Natalie, and she encouraged me to take over singing. She really liked girl groups from the ’60s and grunge stuff, and I like rock. So we started writing songs together.

MM: You’re about to put out an LP.

TT: We are putting out an LP called Chartreuse on August 7. It’s going to be on Little Dickman. State Capitol Records is doing the vinyl. It’s a 10-song record that we recorded in L.A. at the Record Plant with Patty Schemel [formerly of Hole] on drums, which was really cool.

Our old drummer had an arm injury, and we were already out in L.A., and she found out she might need surgery so she stayed behind. She actually didn’t recover fully to play drums.

So the cover of the record is us and 13 drummers — every drummer that we’ve ever played with. We got fill-ins while she was recovering. We’re like Spinal Muffin. 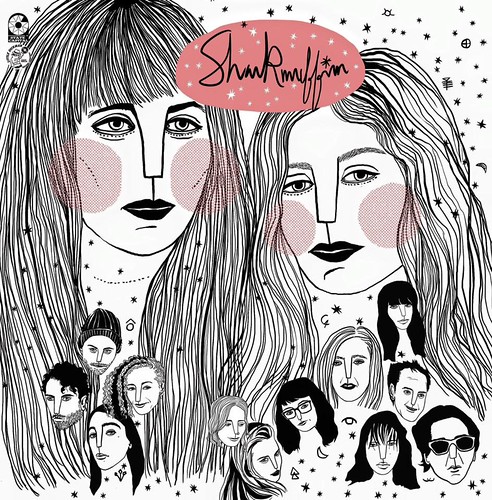 The cover of “Chartreuse” with Tarra, Natalie and a procession of “doomed” drummers
(a la Spinal Tap!) depicted as cartoons

MM: You’re playing a house show in DC, and I’m fascinated by the rise of the DIY scene. I was interested in getting your perspective as a band that’s played house shows and a band from outside of DC coming to play a “house show” here.

TT: It’s our first time playing in DC. Lost Boy ?, the band we are touring with, set up the show. I’m not totally sure who we went through for that.

We just played a house show in Hadley, Massachusetts that was really great. There’s something about not being on a stage and being on the same level of everyone else makes everyone vibe way more with what you’re doing. When you’re on a stage, people are looking up and they sometimes just kind of stand there because they are supposed to watch. But when you’re at a house show, you get to know the people in the scene. With the small DIY scene, you feel like you’re a part of something and not just coming through as some kind of outsider. Does that make sense?

MM: Sure, it sounds like it’s much more relaxed.

TT: Yeah! It’s more relaxed and people can have more fun. With a donations-based show, people can donate what they want to and they don’t have to buy a ticket. So the emphasis is on hanging out more.

MM: Have you found any challenges with house shows that don’t occur in clubs or bars?

TT: There’s always that risk that someone might call the cops!

Other than that, everyone is usually pretty chill. One time in Virginia, though, I ate some mini-wheat thins. They had a table, and they told us we could eat all of the food that we want. But another roommate came home, and he saw that I was eating his cereal and he freaked out. You have to be wary of roommates and when you cannot eat their food!

People who put on house shows know there is a show going on and no one is a dick about it usually.

MM: Have you ever had the cops called on you?

TT: On the first tour we ever did, we were coming back from SXSW in 2012. We played in Asheville, and after the first band, the cops came and we had to break it up. We didn’t even get to play! But we went to an open mike night down the street. And we crashed an open mike night. We got lucky.

We just played in Portland, Maine, in an abandoned house behind some girl’s apartment. It was overgrown and there was no power, and she ran an extension cord out of her window. There were three acoustic acts plus us. Once we started playing, one of her neighbors threatened to call the cops if we didn’t turn it down. So we tried to turn it down. We got to play the whole set, so it was good. But there is always a chance some shit is going to go down.

Sharkmuffin have a busy touring schedule throughout July and August. They are really really good, fun and energetic, so catch them at a club or a house near you! They are in Pittsburgh tonight and Akron, Ohio, tomorrow. (You can find a full tour schedule at Sharkmuffin.com/TOUR.) Perhaps we’ll see them back for their second-ever show in DC soon as well.