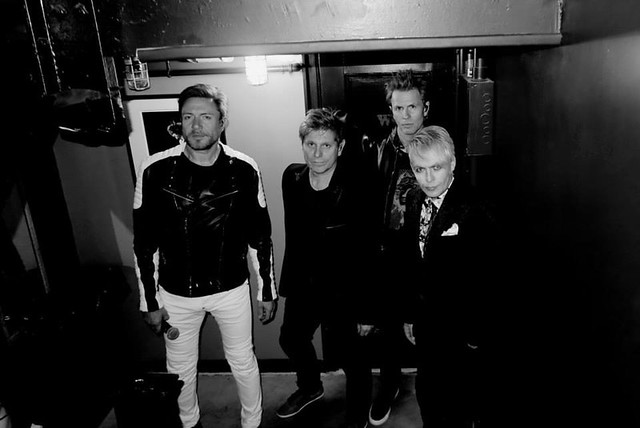 But the first Port Chester concert, and a second show the following night, did not overly concern itself with a new album. The band indeed played “Pressure Off” in the middle of their set, delivering a wonderfully catchy dance track that set the audience ablaze. In conversation with guitarist Dom Brown and backing vocalist Anna Ross the next day, I elicited chuckles when I described the song as “terribly good” and raved about how I listened to the single about 50 times after purchase.

Watch Duran Duran perform “Pressure Off” in a fantastic show at the US ambassador’s house in England on July 4, 2015:
[youtube https://www.youtube.com/watch?v=oJhGUuulQEg]

Other than the single, the band didn’t hype the new album at all in its show. Looking sharp and sounding better than ever, Duran Duran delivered a 17-song set that gave passionate fans everything they could want and more, particularly around the middle of the show, from throughout their entire career.

They opened with “Wild Boys” and satisfied quickly with “A View to a Kill,” still the only James Bond theme to hit #1 in the United States, and “Hungry Like the Wolf,” of course. Frontman Simon LeBon said in a round of national press interviews last week that he would be disappointed if he went to a Duran Duran show as a fan and didn’t hear “Hungry Like the Wolf” and “Rio.” Thankfully, no one was disappointed.

But the middle of the show offered the crowd the art-pop classic “The Chauffeur” from sophomore album Rio — a song that I never previously saw in concert. The performance was amazing. Nick and Simon start out alone on the stage, and then drummer Roger Taylor glides up behind his kit and adds percussion to Nick’s slinky synths and Simon’s powerful voice. Bassist John Taylor strides in, happy-go-lucky as ever, and starts playing a keyboard himself — as the song is heavy on synths. Before long, Dom and Anna have joined and the collected band thunder “The Chauffeur” home to its conclusion.

The audience is reeling and then Duran Duran play “Election Day,” smacking up our expectations with one-two punch that left everyone in the room positively giddy. Next, Duran Duran leap into their cover of “White Lines” by Grandmaster Flash and Melle Mel from their mid-’90s covers album, Thank You. While not a personal favorite with myself, the crowd went wild and belted out “Freeze!” and “Rock!” where appropriate. People were dancing all over the general admission floor.

The excellent last album, All You Need Is Now, was well represented by the title track and the smashing “Girl Panic.”

After closing the set with a rousing rendition of “Rio,” Duran Duran departed the stage. The house lights came up but the audience refused to leave. Technicians tentatively powered down some equipment as the house remained full. Time passed. About 30 minutes later (!), the band returned.

Simon jumped directly into “Careless Memories” and wrapped up the encore with a surprisingly effective medley of “Girls on Film” combined with “Psycho Killer” by the Talking Heads. I literally got goosebumps the moment I recognized the opening chords of “Psycho Killer,” and the performance was sublime.

The weekend was a tremendous gift to long-time admirers from a band in fine form. Duran Duran play a few more shows this week — one for the high-end FOLD Festival in the Hamptons and another in Bethlehem, Pa. But they are sure to return to DC in 2016 for the upcoming Paper Gods tour. That will absolutely be a can’t miss show.