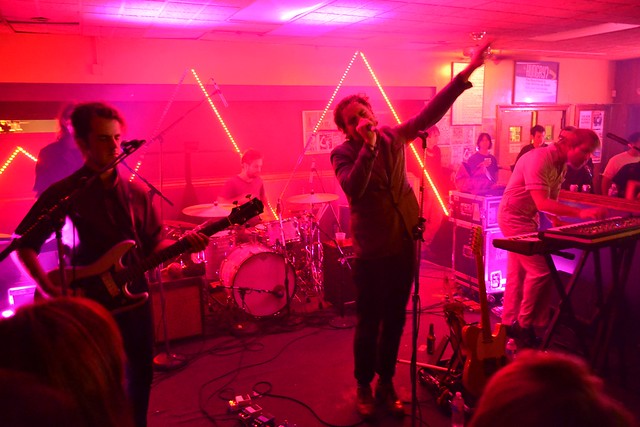 Gardens & Villa performing at the Beachland Tavern in Cleveland, Ohio, on Oct. 14, 2014. (Photo by The Zender Agenda)

Santa Barbara’s Gardens & Villa is an unusual band for modern times. Usually described in terms of its synthesizer, the band manifests itself rather more as a post-punk outfit accentuated by the synth rather than defined by it.

In so doing, Gardens & Villa demonstrate an interest in ‘70s glam from the United Kingdom while avoiding an outright aping of the style of Roxy Music or David Bowie. The result is some pleasingly melodic music that isn’t afraid to be experimental while at the same time retaining a pleasant pop appeal.

In a tour supporting their third album, Music for Dogs, Gardens & Villa Thursday visited the Rock and Roll Hotel, where they held the rapt attention of a half-full room with a set that slowly built up to exceed the crowd’s expectations by the show’s midpoint.

In performance, the band’s core duo of vocalist Chris Lynch and synthplayer Adam Rasmussen both focus on their instruments in a manner that seems comfortable and easygoing. Gardens & Villa perform as a quartet in this latest tour, augmenting Chris and Adam with a drummer and a bassist.

Early in the set, they play the sunny “Fixations,” a new song that almost manages to sound like The Drums with a “things can only get better” casualness as we “see if we can make it underneath the radar.” But as the show progresses, the band evokes a stronger reaction from the audience, who are in the mood for the band’s more experimental numbers.

Gardens & Villa practically undergo a spiritual journey, for example, with the first-album song “Black Hills,” which evokes an awakening of sorts with lyrics that reference Southwestern-like mysticism of “native bones,” “adobe bricks” and “scented winds” and that close with a chant of “white night sunlight.”

Watch the original lineup of Gardens & Villa perform “Black Hills” in a “Honey, I’m Home” session in Brooklyn on Oct. 28, 2011:

About halfway through the set Thursday, Gardens & Villa really hit their stride, and the audience is more engaged even in the new numbers, such as “Express” from Music for Dogs. The song is punchy but fun, and its sparkling synths come close to breaking out into a full new wave composition.

As Chris trades off lyrics “looking for myself” and “looking for some fun,” the song almost seeks to lapse into a calypso riff but restrains itself. Clearly, the gents appreciate Roxy Music, as the seminal English glam rockers are surely an influence on this song; Chris’ lyrical delivery is on this number would make Bryan Ferry proud.

Lyrically, Gardens & Villa also dare to have a lot of fun, particularly in songs like “Spacetime” from their self-titled debut album. The catchy song nails the sort of thing that Chris and Adam apparently aspire to: a funky tune about a groovy chick with sci-fi overtones that could have dropped out of the late ’70s Bowie catalog. The song seems to speak metaphorically of not being able to hold onto life, love or feelings in general across space and time.

Near the end of their set, Chris introduced “Maximize Results” as a song about technology and panic attacks — and about having a panic attack over social media.

Chris very effectively starts singing slow and softly on “Maximize Results” but then leaps into a chorus with increased frenetic energy as it progresses. The way in which he sings emphasizes some clever lyrics, suggesting that something idyllic has become more fevered over time: “Looking for love, I can take you there/Pushing my luck, I can take you there.”

Also later in the set, Gardens & Villa deliver a surprisingly earnest cover of “Waterloo Sunset” by The Kinks. The choice of cover song augments the band’s set, allowing them to demonstrate their chops on a song they clearly like a great deal, without being too obvious about their own tastes and influences.

Gardens & Villa continue their tour with a show tonight in Philadelphia, and they travel across the country in their latest tour throughout October and November. They were deserving of a larger audience than they drew in DC, so turn out to see them when they come to your town. You won’t be disappointed if you like intelligent pop suited for our times from a band that clearly has its own ears tuned to Roxy Music and Bowie in the ’70s.