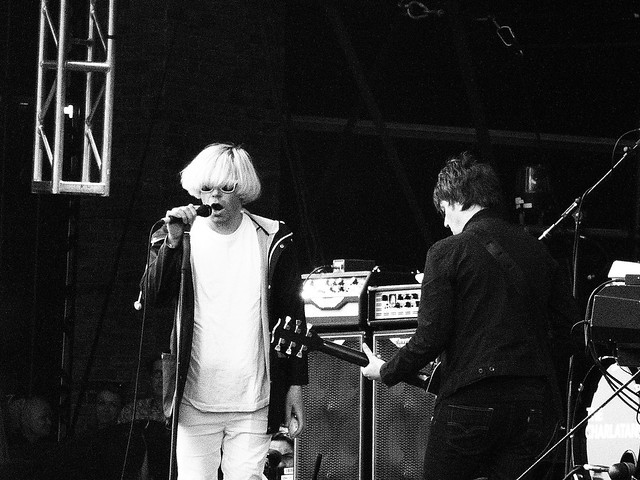 Modern Nature is the first album by The Charlatans since the death of their drummer Jon Brookes by brain cancer in 2013. With Jon’s passing, The Charlatans have recruited Pete Salisbury of The Verve to play drums with them, bringing their current core number to five when they are on the road.

Some of the songs of course are somewhat more reflective under the circumstances, but The Charlatans maintain a very forward-facing outlook, seeking better times and better climes. For example, they closed their main set with “Come Home Baby” from the new album; it’s a song that may not be as up-tempo as others like “Let the Good Times” but it nevertheless has a similar character, defined by Tim’s expressive voice while awash in bright guitar by Mark Collins.

Listen to Tim chat a bit about the album, and watch the Charlatans perform “Come Home Baby” live from The Church via YouTube:
[youtube https://www.youtube.com/watch?v=mTS_wdPKzbg]

The Charlatans didn’t forget long-time fans, of course, as they got everyone in the room swaying along to a robust performance of “The Only One I Know” toward the end of their set, and they closed their encore with “Sproston Green,” another first album favorite that pleased the mid-sized DC crowd.

The band isn’t in the United States for much longer; they hit Sacramento, Calif., tonight and Portland, Ore., tomorrow before departing for Mexico and then returning to the United Kingdom. If ever you loved these guys, they remain the steadfast musical companions that you always knew, and they are well worth seeing again when the opportunity presents itself.