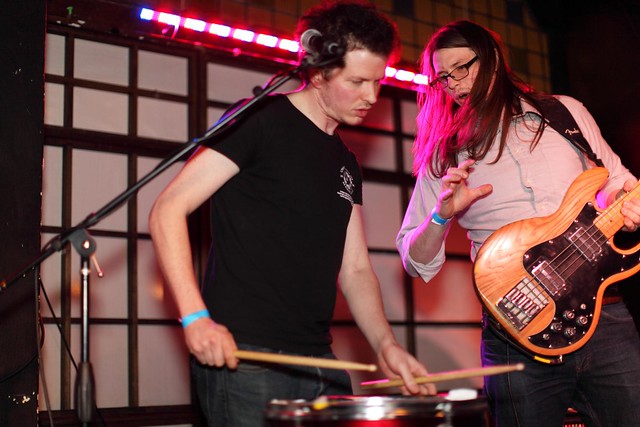 Ed Schrader’s Music Beat perform at Cause in Minneapolis, Minn., on April 8, 2013. (Photo by Sharyn Morrow)

If you’ve heard DC power pop trio Ex Hex, a favorite band of us here at Parklife DC, you know the ladies occasionally capture an early punk vibe from the mid-’70s a la Blondie. While not a punk band per se, Ex Hex are certainly “punk friendly.”

As such, what better way to open an Ex Hex show than with others who clearly have a love for New York ’70s punk? And so this Thursday, Dec. 10, show up to the 9:30 Club early to catch openers Ed Schrader’s Music Beat–the Baltimore-based punk duo of Ed Schrader and Devlin Rice.

Ed and Devlin have had a busy year, tearing up the tour circuit all over the country, including stops at SXSW 2015.

In 2014, they published their second LP, Party Jail, and followed it up immediately with a single, “Laughing.” “Laughing” is a quirky song about Emily Dickinson, according to Ed, that could have come from They Might Be Giants honestly, particularly given its low-key jazziness and the interplay between the two men.

This year, they released yet another song, “Emperor’s New Chair,” that captures their usual punk antics as well as their unique sense of humor in about 90 seconds of frenetic fun. The video is a good deal longer than the song only because they wanted to goof around with a plot device that causes them to switch clothes — which of course in the band’s cartoon logic means they also have to switch instruments.

Devlin: “Can you play the bass?”

Ed: “Well I was in an REM cover band for three years. I’m no Mike Mills, but I think we’re going to have to fake it.”