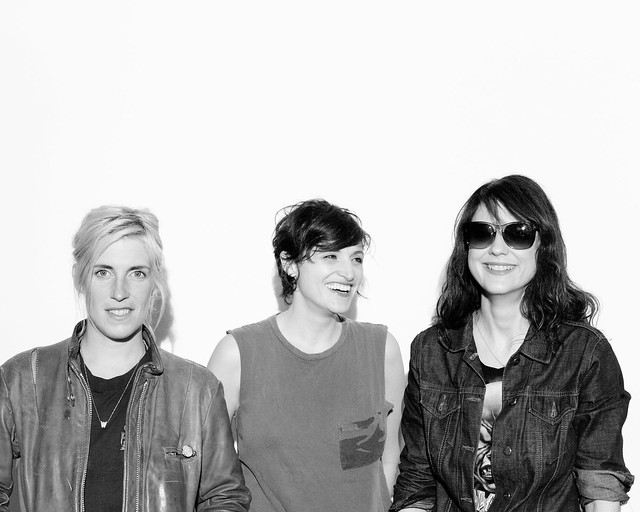 Somehow in mid-’90s, friends of mine were clued into some good female-fronted indie rock bands — quite a few of them from Boston (including the likes of the Blake Babies and Belly).

Somewhere in the rush of sorting through what was good and what was bad in the ’90s (an arduous task to be sure), I recall hearing Mary Timony’s voice on “Cosmic Rays” off the last Helium album, Magic City. I liked everything about it — the timber of Mary’s voice, the noisepop with psychedelic overtones, the hushed atmosphere, etc. Little did I know that Helium were about to (or already had?) broken up when I heard that song.

As musical output goes, it was a good thing ultimately, as Mary moved from Boston back to her hometown of DC somewhere in there and launched a solo career, which she followed up with a short stint in Wild Flag with the “Sleater-Kinney ladies” as I am wont to say.

But Mary, our city’s finest guitar player, really struck gold with her new band Ex Hex, a power pop trio consisting of herself, Betsy Wright on bass, and Laura Harris on drums. Ex Hex released their debut album Rips via Merge Records in 2014 — and after many shows around the world, they are playing a show tonight, Thursday, Dec. 10, at the 9:30 Club (their first appearance at our city’s foremost temple of music).

You probably already know Ex Hex if you live in DC because they’ve sold out the Black Cat twice in previous performances. (Read my thoughts via We Love DC after seeing their first show at Black Cat in March 2014.)  But if you’ve missed them to date somehow, rest assured Mary recruited her bandmates extremely well. Both Betsy and Laura have previous tenure with bands at Ian MacKaye’s Dischord Records label, and they and Mary share a love of straight-forward, unpretentious punk.

And that is part of the particular genius of Ex Hex: simplicity. Arguably, Mary Timony’s music was more complex earlier in her career — but as she has found her new groove, she has been well served by her undeniably catchy songs, a defiant punk attitude, and her very talented bandmates. Do yourself a favor and go see Ex Hex tonight if you haven’t seen them yet. Good music, guaranteed!

Tickets have been available online, but you may want to buy yours at the door with the show only hours away!