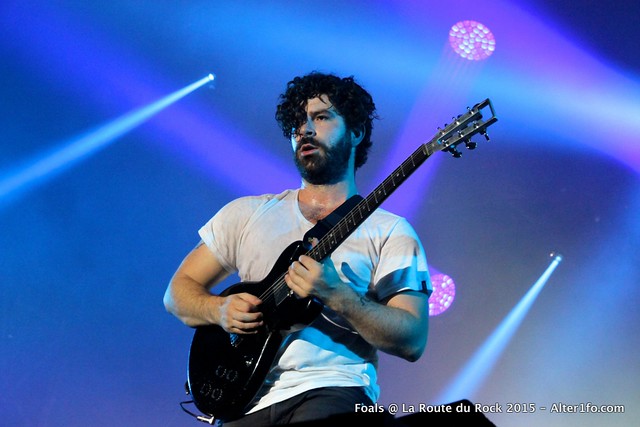 Yannis Philippakis of the Foals performs at La Route Du Rock in France on Aug. 16, 2015. (Photo by Alter1fo)

“This song is about what happens when Trump gets into office,” said the very Greek Yannis Philippakis, frontman of the UK band Foals, when introducing a new song, “A Knife in the Ocean.”

The shimmery psychedelic song is both a departure and an affirmation of previous songs by the Foals in that it is more slowly paced but still built upon remarkable guitarwork. The song, from the band’s fourth studio album What Went Down, is about losing things to time as if they were washed away by the sea. Apparently, Yannis believes we will lose many things of value if Donald Trump becomes US president.

Politics aside, Yannis and his three bandmates played a sold-out show at the Lincoln Theatre on Wednesday, Dec. 16, enrapturing an enthusiastic audience with new material like “Knife” that stacked up well with the Foals’ more familiar songs.

Watch the Foals perform “A Knife in the Ocean” on Live BBC Radio 1 in July 2015:

With their new material, the Foals have shook off some of their punk leanings of shorter, louder songs in favor of psych’s longer, jammier numbers. As it’s been a slow transition into such performances anyway, the transformation sits upon their shoulders pretty well. Yannis is a confident frontman, and even in a seated venue like the Lincoln, people seemed drawn to him, magnetically pointed to true north like compasses in their seats. He favors a bit of funk in his own guitar playing, such as with the new album’s “Mountain at My Gates.” The Foals played that catchy number, about facing rising challenges, early in their set, preparing the audience well with its rising tempo and determination, which comes through in Yannis’ voice as he sings with more grit while the song progresses.

Throughout the show, however, the Foals sprinkled in older material to great effect. The popular “My Number” from third album Holy Fire popped up early, refreshing us with the band’s proclivity for tighter post-punk in their earlier offerings. “My Number” also presents color through a vague calypso flavor, a favorite genre of the UK art rock scene since Roxy Music. At the opposite end of the Foals’ spectrum, the band also revisits second album Total Life Forever with selections like the sweeping ballad “Spanish Sahara,” which really showcases how well the band works together. The slowly simmering strummer capitalizes on sparse instrumentation from the band and some lovely harmonizing particularly between Yannis and bassist Walter Gervers and guitarist Jimmy Smith. With its wistful visions of things that could be, “Spanish Sahara” was one of the best-received tracks during Foal’s DC performance, and deservedly so.

The Foals’ encore consisted of songs like their latest title track “What Went Down,” more of a straight rock number that carries forward a lot of the punk energy the band displayed earlier in their career. Again, all four men hit their marks, but drummer Jack Bevan really gets an opportunity to stretch his legs, particularly with the pounding drive in the latter half of the song, while keyboardist Edwin Congreave adds some power to the punch, particularly in the beginning of the song.

Fittingly, the Foals closed with a salute to their debut album Antidotes and a terrific performance of “Two Steps, Twice,” a great song for showcasing their early punk dynamic.

Foals have wrapped their US tour, so we Americans won’t have an opportunity to see them for a stretch — likely in a few years when the fifth album comes down the pike. The band has been growing in some very vigorous ways, and it is well worth seeing them again soon. They are sure to remind you that they don’t sit still. And maybe they’ll be open-minded enough to play at the White House for President Trump when they return in 2017 or 2018. (I’m kidding; I’m kidding.)