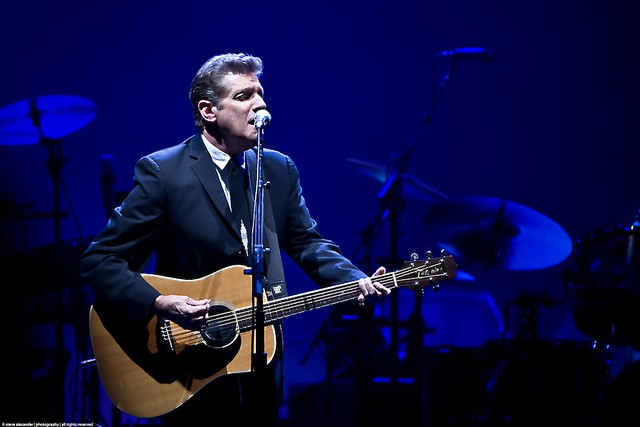 One of my most played albums from the 1990’s was the 1993 tribute album, Common Thread: The Songs of The Eagles, performed by a variety of country artists. Trisha Yearwood’s rendition of “New Kid In Town” and John Anderson’s “Heartache Tonight” were among the stand-outs, both songs traditionally sung by Glenn.

I also abused their two CDs, Their Greatest Hits and Eagles Greatest Hits Volume 2, more than any other albums in my growing collection during my college years. I certainly think I annoyed many of my fellow dorm mates. My roommate to this day is still scarred. I have no regrets.

My favorite album is Hotel California, but not because of the titular song (even I think it’s over played) but because of “The New Kind In Town” and “The Last Resort”. The lyric from the latter, “You call someplace paradise, kiss it goodbye” is the origin of my personal blog’s tagline, “…everything you know, kiss it goodbye.”

I enjoy the fact that The Eagles shared the lead singer role so freely, as many as five different members sang at least one song. But it was Don Henley and Glenn Frey that led the charge. They were the heart of the band’s sound.

Hotel California’s only song with Glenn Frey on lead vocals was “New Kid In Town”. Maybe his best. Yet, in my humble opinion, Glenn’s best song with The Eagles is “Tequila Sunrise”. But I won’t begrudge anyone for picking “Take It Easy”. Or any of his songs.

Glenn Frey’s public life was more than the band of course, he had a successful solo stint, contributing to the zeitgeist of the ’80’s with songs like, ‘The Heat is On’ (The H is O) and ‘You Belong to the City’. He also had a few minor acting stints, including on the TV show, Miami Vice.

I’m sad that Glenn Frey is gone. And Alan Rickman. And David Bowie.

Thanks Glenn, we’re sad but still can find a peaceful easy feeling in your music, you didn’t let us down.