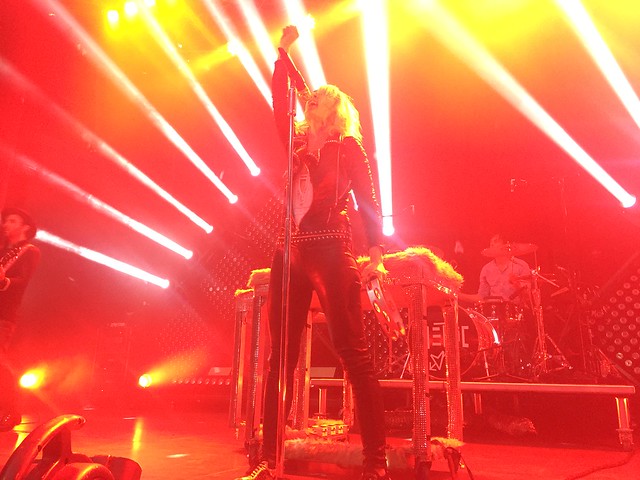 With “IOU,” Metric warms the audience up for what’s to come. Emily sings and steps behind the keyboards for a spell during the chorus of the steady, foreboding song. The hands of James Shaw zips along his guitar while bassist Josh Winstead and drummer Joules Scott-Key fill out a powerful rhythm section. 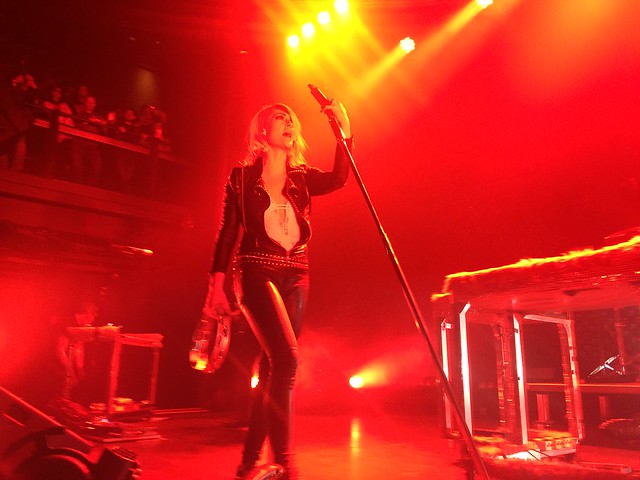 An impressive light show was an appropriate back drop to the new wave rhythms of Toronto’s favorite sons (and daughter).

By the time Metric have hit the new album with “Cascades,” five songs into the set, they have whipped the audience into a frenzy. James, Josh, and Joules have donned some very ’80s googles with LCD screens for eyes, and Emily returns from the wings with a thin, billowing cape wrapped around her leather outfit. Emily sings in a sweet soprano and eases us into the song, which addresses “cascades of emotion” that’s “compelling you on.” The band soon encounters the high point of the song, as Emily steps behind her synthesizer and changes the tone of the number into a full-blown new wave thumper. I cannot help but think of Blondie’s “Rapture” and how it vocally lulls you to peace with its chorus only to burst into frenetic energy in its verses. “Cascades” is kind of the inverse of that with incredible waves of synth raining down upon you during the refrains.

After a breath-taking rendition of “Cascades,” Metric take it down a notch with Emily rendering an acapella verse from “Raw Sugar,” taken from 2007’s Grow Up and Blow Away. It’s a beautiful touch particularly as Emily’s voice really delivers. She revisits the device toward the end of the show with a moving acapella version of “Combat Baby” from Metric’s debut album, and the audience — well familiar with the song — is compelled to sing along out of sheer joy of hearing an old favorite receive such respectful treatment (even if it is a song playfully about missing the way you once fought with your ex).

As Metric approach the midpoint of the show, the band add yet another memorable twist with their performance of “Dreams So Real” from Synthetica. They have recruited a citizen’s choir of about 12 people to sing the chorus of the song along with them onstage. Before the song, Emily says some heartfelt words to the audience about hanging onto your dreams and being true to yourself, particularly in turbulent times. Emily is an extremely credible and persuasive spokesperson for the band, so you believe her when she speaks of appreciation for the sold-out audience at the Fillmore, which has absolutely packed the large concert hall, and the point is driven home when audience members add their voices to the song and you get that sense of humanity that Emily sought for solace.

Lest I leave you thinking this show was all deep feelings and no fun, we’re soon dancing our hearts out to Fantasies’ “Sick Muse,” one of the liveliest, glammest new wave tunes I’ve ever had the pleasure to hear. I’ve rarely heard a better lyrical composition in a pop song: “You better watch out Cupid/Stuck me with a sickness/Pull your little arrows out/Let me live my life.”

Continuing the hits parade, Metric followed up “Sick Muse” with “Black Sheep,” a single that eventually found a home on the soundtrack of the hipster film Scott Pilgrim vs. the World.

As Metric barreled into the last quarter of the set, the big songs kept coming — the driving “Synthetica,” an ode to living in the real world; the aforementioned acapella “Combat Baby”; the glam “Gold Guns Girls,” a cautionary song against excess; and “The Shade,” a declaration of seizing the moment.

“The Shade” is a beautiful, soaring piece of synthpop from Pagans in Vegas, and it speaks well of how Metric function as a unit — Emily’s arresting voice, Joules’ roaring percussion, the playful guitar from James, and the roving bass from Josh. Like many very good Metric songs, “The Shade” starts out soft but gets bolder and louder before the one-minute mark when we hit the rapid fire chorus — delivered as a demand of “I want it all,” but surely one to which we acquiesce in the wash of the smart melodies that roll over us.

Surely, after such an epic set, the encore wouldn’t hold up? But no, of course, Metric continue to impress.

They return to the stage for perennial performance favorite “Empty,” from second album Live It Out, which gives Emily an opportunity to send up her own rock star aesthetic to the lyrics “Shake your head it’s empty/Shake your hips move your feet.” The audience cheers and imitates her whiplash dance when she shakes her head and hips, whipping her hair from side to side in time with the beat of the song. It is a performance that has grown in power and poignancy over the years, and honestly on the surface it’s lovely theatrics as well (– and OK, it is straight-up adorable).

The entire concert wraps up with “Breathing Underwater,” and we’ve underscored the point of naming the tour after a lyric in the song, a strong selection from Synthetica. When Emily sings, “Is this my life? Aaaaaah,” the entire room is singing along with her. She’s more than a rock star to the assembled audience; she’s authentic. And I think that’s the key to Metric’s continued whirlwind success. We believe in them, and they in return believe in us. We meet for their performance, and we experience a bit of catharsis.

And remarkably, we all leave feeling quite a bit happier for the experience.

Metric continue their tour tonight in Philadelphia and then wrap up the United States with only two more shows, ending up Thursday in Boston, before embarking on a trip across Canada through April 1. Go see them! If they are new to you, they will deepen and widen your appreciation for them. If you’ve known them for a long time, they will win you over as if you were hearing them for the very first time. Either way, Metric put on a show you don’t dare miss. 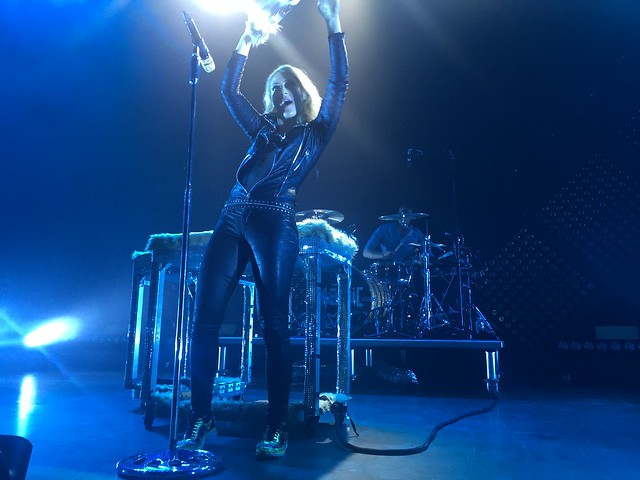 Emily shakes a tambourine early in the show.