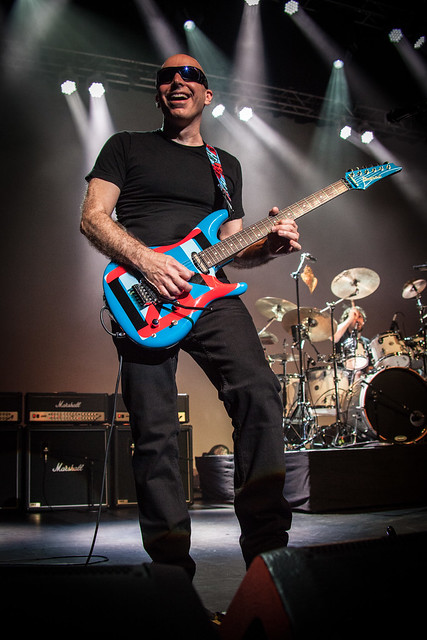 The stage itself was set simply, with just the basic instruments, and a giant screen (in three parts) as the backdrop, that displayed strange and mysterious animated videos of said adventures and locations.

Besides Joe on guitar, his band was composed of Marco Minnermann (drums), Bryan Beller (bass) and Mike Keneally (guitar, keyboards).

Joe Satriani wears sunglasses at night, as his wrap-around shades never left his face. Add a shiny silver jacket and a black t-shirt, and he looked the part of a classic space adventurer.

The show spread over two sets (with a short intermission) that spanned 25 songs and countless guitar picks. Joe switched his guitar after every 2-3 songs, and played five different guitars (if you believe my counting abilities). Add to the fact that the songs themselves are not often short and sweet, and the audience had amble time to get deep into the moods that each song draws out.

Mid-way through the first set Joe played “On Peregrine Wings”, which is my favorite from the new album. You can imagine yourself flying high and seeing the Earth below, only to swoop down into the thick of human chaos. [youtube https://www.youtube.com/watch?v=c_6qqyS2jRw]

Then, with a bit of commentary, he played “Friends”, describing it as his ‘most fun song to write’. The funky and explosive “Time” got people nodding along.

The second set kicked off with a drum solo by Marco Minnermann, and later Mike Keneally had a chance to perform a keyboard solo, which they both nailed.

Two of the more inventive songs from the second set included, “Lost In Memory” and “Luminous Flesh Giants”. I’ve always been fascinated by the latter song title, I pictured a scene from the Lord of the Rings, where a gaggle of fat giants held court over their kingdom. (Google provided this from HardRadio.com: Satriani on the story of “Luminous Flesh Giants”, “It’s a combination of Dreams and half-hearted humorous day dreams about aliens, giants and monsters. I use that as a mental theme to get my musical point across.”)

Taking it down a notch, the leisurely “Always With Me, Always With You”, made me wish I had a lighter to sway with. Then the ultimate ode to 80’s hair bands, “Satch Boogie”, closed out the second set. He had closed out the first set with the equally butt rocking “Summer Song”.

There was no point where people looked at their watches (smart phone) and wondered when the show would be over, even as it reached towards an Oscar Awards-level running time. In fact, I suspect everyone present could have lasted all night if Joe had wanted to lead them that far.

The show came to glorious and furious finish with the superhero-like “Surfing With an Alien” and the complementary animated short, where we wended to another wild and far-flung world.

After all the exposition of this review, I’m not sure if I qualified whether I liked the show or not. Yes, yes I did. (Said while grinning ear to ear.)