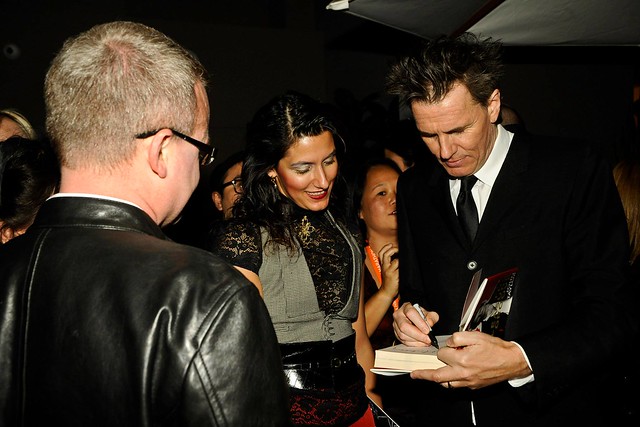 As Nile strode humbly up behind Duran lead singer Simon Le Bon, Simon intoned, “I feel the presence of greatness. Do you feel it as well?” And of course, the happy go-lucky, indomitable, brilliant Mr. Rodgers flashed his humble grin and began to play alongside a band that owe him at least a small part of their soul.

While Nile played guitar, the two songs highlighted by his presence with the band showcase a fascinating bridge across exactly 30 years of amazing music by Duran Duran. I’ll surrender all pretense right away, and I’ll confess that I think Nick, John, Simon, and drummer Roger Taylor are the foundation of the most amazing band in pop history. Part of the reason I make that statement is because of their undiluted work ethic. Duran Duran, even over some lineup changes, have always been a working band. Somewhere in the minds of the core quartet is a restlessness, a yearning for artistic expression that never stops. And it drives them even in the face of occasional critics who once dismissed them as a disposable boy band. The songs like perennial concert favorites “Hungry Like the Wolf” and “Rio” — both performed Friday night — endure because they were smartly conceived on solid music foundations straddling two worlds of synthpop and R&B, glam and disco.

“Notorious” serves this up at its most obvious with its R&B luster, catchy refrain, and smooth grooves. “Pressure Off” does so in a similar manner 30 years on, but reflecting the band’s brand of glittery optimism — “Everybody everywhere, feel it in the air/Oh yeah, it’s time to take the pressure off/Everybody everywhere, step out into the future/It’s time to take the pressure off.” Duran Duran’s positive outlook, fabulous style, and artistic vision have formed a key part of a foundation to which I can return again and again to become emboldened, confident, and happy throughout my own life.

In a recent press interview, Simon recalled how when he met his compatriots and original guitarist Andy Taylor in Birmingham circa 1978 during his audition to be the band’s singer, he knew he would get along with them right away because they all were generally happy fellows. And that showed through in the records they made together over the following decades. Carrying forth the vision of a better future adopted by the New Romantic scene in England, Duran Duran have never truly lost that thread, even on the latest album, Paper Gods. With a capable new collaborator in producer Mr. Hudson, the band have made some songs that are a bit more cynical than typical Duran Duran fare, but they have done so in a style that is completely authentic to them. Thus, the anthemic “Paper Gods” title track, with which they opened the show, warns of the dangers in the false promises of fame and temptation, but it does so in a way that seems completely honest from the glam band that made flashy music videos on yachts in their youth.

Their style and class is a reflection in part of the example set by Nile, who proves unassailable after losing good friends and himself beating cancer in recent years. Nile and his new Chic collective sang popular songs like “Good Times” and “Le Freak” during their opening, and it’s clear the man’s indefatigable spirit was there from the first day he began recording. I had the immense pleasure to shake his hand after his set and tell him point blank: “I admire your strong optimism and fantastic creativity, both of which make your music so powerful.”

Watch Duran Duran perform “Pressure Off” with Janelle Monae and Nile Rodgers at the FOLD Festival at Martha Clara Vineyards in New York on August 5, 2015:

Duran Duran and Nile Rodgers also took turns in paying tribute to an inspiration: the late David Bowie. Bowie’s passing shocked the pop art world in January, leaving Duran Duran without the man who served as their chief idol and leaving Nile without his friend and collaborator. During Friday night’s show, Duran Duran saluted Bowie with a rendition of “Planet Earth” that mixed into a medley with “Space Oddity,” the original Bowie hit; and Chic performed a soulful version of “Let’s Dance,” the title track of the famous album Nile produced for Mr. Bowie in 1983.

All of this was incredibly moving enough, but Duran Duran delivered one final soaring tribute during their encore with a full-throated performance of “Save a Prayer,” which they dedicated to victims of the attack on the Bataclan in Paris on Nov. 13, 2015, as well as others who have suffered through terror. You see, the band performing that night in Paris was Eagles of Death Metal, who recorded a cover of “Save a Prayer” for their latest album, Zipper Down. Duran and EODM performed the song together on English television only days prior the show in Paris, and so a romantic song about a one-night stand became something a little more powerful as a song that embraces a lust for life.

Watch Duran Duran perform “Save a Prayer” live with the Eagles of Death Metal on TFI Friday in England on Oct. 30, 2015: