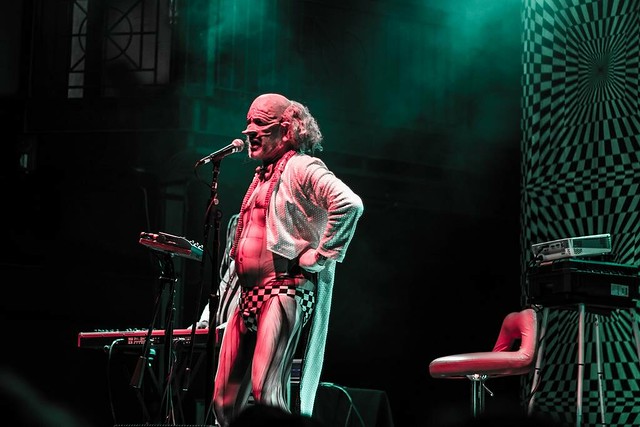 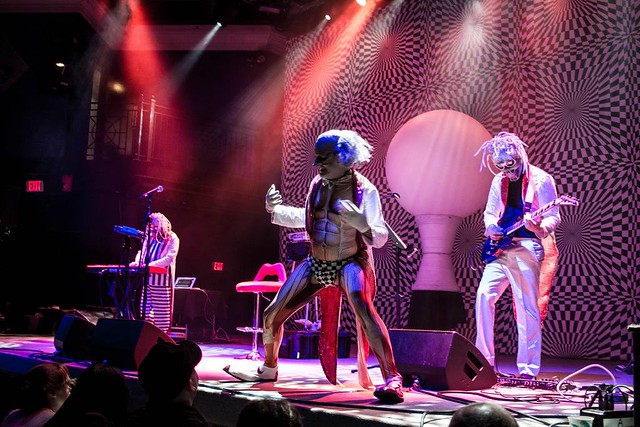 “Shadowland” is Part 3 of the Randy, Chuck, and Bob Trilogy. Part 1, “Talking Light,” was presented in 2010 (apparently the last time they played the 9:30 Club) and concerned itself with the theme of death. This was followed by Part 2, “Wonder of Weird,” which was presented in 2013. The theme was loosely focused on adolescence, and coincided with the band’s 40th anniversary.

The themes presented in “Shadowland” are birth, rebirth, reincarnation, and near-death experiences. As with the previous two tours, the stage presentation is much simpler than for what the group were once known. The elaborate theatrics of The Mole Show and The King and Eye are gone, as are the group’s iconic eyeballs. Less is more, though.

On Friday, a trio steps to the stage, rather than the quartet-plus-ensemble-of-supporters from days past. They introduce themselves as Randy, Rico, and Bob (Chuck having retired from touring, it would seem). In identifying themselves by name, as they have in recent years, The Residents have pierced their legendary anonymity (unless it’s all part of the artifice, and these are once again just characters). Their attire is simpler. Each member’s face is covered to varying extent with stylized death masks and a rubber skullcap. They wear white sequined tuxedo jackets over what ranges from black and white Beetlejuice stripes to a one piece latex body suit and speedo.

The centerpiece of the stage is a giant white sphere atop a chess piece podium, set against a hypnosis inducing checkered backdrop. The sphere is used very effectively for video projection, as well as target for patterned stage lights. As simple as the set design is, it proves to be very versatile and engaging. Video segments are interspersed among the songs, presenting testimonials of departed and returning souls. Each subject wears a death mask and tells a story of a tragic ending and a redemption.

One does not go to a Residents show to hear a review of their hit singles. It’s impressive the degree to which their entire show is written, scored, and performed to be a presentation in its own right. This is an installation to be viewed at a gallery more than a rock concert. Having said that, a few recognizable numbers from years past did make it into the set. “Constantinople” was given a fittingly sparse arrangement, and I suppose if there were to be a moment for a sing-a-long, this might have been it.

And “Easter Woman” from “The Commercial Album” emerged as part of a medley. Performing as a trio, and bereft of supporting players, The Residents make a case for the musicality of their creation. There is no drummer, just a solitary keyboard and electric guitar along with backing tracks from a laptop (perhaps this is now the fourth member). Amidst structure there is room for improvisation. Their rendition of “Constantinople,” as well as the instrumental that leads into it, does not rely on the programmed pulse of the computer. And the vocalist Randy uses an on stage processor to bend and contort his voice through the set. I watched Ogre from Skinny Puppy using the same technique years before, and I always admired the possibilities that it opened up. In all, the group went through 20 songs, five video interludes, and two encores in a set that never dragged on or lost its pace.

The live performance was preceded by a presentation of the film “Theory of Obscurity.” The film traces the history of The Residents from their origins in Shreveport, Louisiana, to their migration to San Francisco at the height of the counterculture wave of the 1960s, and then out into the world at large.

A huge range of notable names and faces show up in the reel, including former officers of The Cryptic Corporation (the group’s representation in the business world). Also appearing in the film are supporters like Matt Groening, Penn Jillette, Barbara London, Jerry Harrison, and Josh Brody, along with members of Devo, Primus, and Ween. Performers who have contributed to The Residents’ body of work appear as well, including Margaret Smyk and Laurie Amat.

Following along with the group’s recent willingness to appear less opaque to the public, the film goes a long way toward humanizing The Residents and their story. I must confess that I felt a little twinge of regret as some of the mystery was stripped away. It was like the feeling of disenchantment I had in witnessing that any four blokes could be Kraftwerk (original members or not), and in a similar sense it’s disheartening to think that any four people in plastic eyeballs could embody The Residents.

The performance that followed, however, made it very clear that this is not so. In any case, the group has earned the right to emerge from the shadows and offer a moment of reflection. They’ve put an awful lot of work into a pursuit that has spanned four decades, and in the stage footage that appears in the film, they acknowledge that such a work takes a toll. Theirs is a story that deserves to be told, and the film is very effective in that regard. And besides, Penn Jillette does assert with some credibility that The Residents don’t really exist anyways.

It was once said of the “post rock and roll” era performers that arose in the 1980s–artists like Sting, Peter Gabriel, and the like–that their music did not rely on youth as its essential resource. This was a distinction to be made over rock stars who had preceded them, upon whom age did not sit so well in their later years. I think this notion applies in regards to The Residents as well, but oddly so. 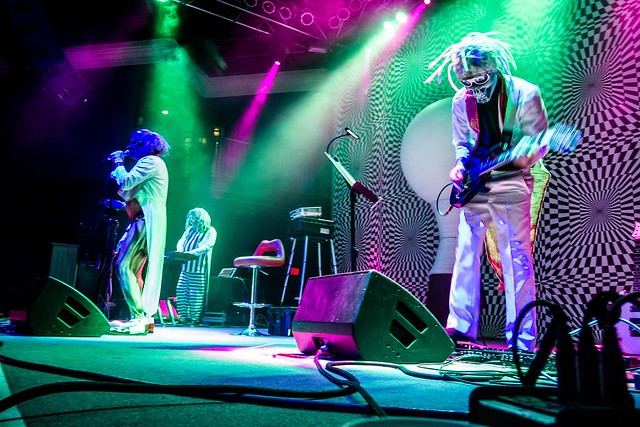 Much has been made of their anonymity, and the manner in which it sets their work in its own context. Nevertheless, they have created a personae, and it was more evident within the relatively stripped down presentation offered at the 9:30 Club. Despite the obscuring of their identities, the humanity of the people involved comes through. There is leader to the band it would seem, in the form of the vocalist Randy. His voice has been as distinctive and recognizable as any other frontman throughout their catalog, placing on him the onus of being the core member. He has an artifice that he has constructed for the purpose of performing, going back to the earliest recordings. This character defies the restraint of age, even as it is evident upon the human vessel that carries him, largely because he has always come across as a fusion of an ancient backwoods Louisiana hermit and medicine show mystic. He is able to shamble about the stage as if beset by dementia, conducting the performance as one would a séance, just as he might have 40 years before. Or a century before, at a dirt road carnival sideshow, in front of a steam calliope.

It’s hard to say whether it’s mockery of the folk he grew up around or a homage. But this character has always seemed to be lost to time. Maybe even somewhat decrepit, as he conjures campfire ghost tales in his Bayou twang.

Behind the strangeness, even the seeming silliness, I’ve always sensed a fundamental sadness to this character. He wears a downturned Pagliacci-like frown throughout his performance, as he intones a kind of world-weary nursery rhyme blues that might have been conceived by a gathering of Lewis Carroll characters. The words he offers against the chaotic knot of dissonant tones played by the musicians have the simplicity of Grimms’ Fairy Tales–short words, simple rhymes, chanted like spells and incantations. The is no phony eloquence to the lyrics, as he speaks of an unrequited fondness for rabbits, of weightlifting Lulu and Mickey Macaroni, of blue rosebuds and fever dreams. But much like an indigent street dweller from a Terry Gilliam movie, there are moments of profoundly simple wisdom buried in these words: “Everything that gives us pleasure gives us pain to measure it by.”

By contrast, the musical backdrop of The Residents has never seemed dated to me. They have always incorporated new technologies in their recordings, including contemporary digital tools. If you are concerned at all with the process of production, as I am, you can identify many techniques evident in their more celebrated techno, synthpop, and industrial contemporaries.

Despite their disjointed clonky-sounding film-noir progressions, I’m sure there’s very little Trent Reznor ever did that The Residents didn’t do first. At any rate, they never sounded like anything like their surroundings, emerging as they did from ‘60s-era Haight-Ashbury. Comparisons can be made to Captain Beefheart, Tom Waits, Sun Ra, and Danny Elfman, but their sound has very few corollaries. And at least in the case of the latter, it’s pretty clear the direction in which the influence flows. By the way, the articulate playing by the musicians at the 9:30 Club show (by Bob and Rico) goes a long way to refute the notion of informal musicianship suggested in “Theory of Obscurity.”

And so, the maturing, possibly reflective, actual persons behind The Residents have completed and presented a trilogy that contemplates, in reverse order, the stages of life. From death to adolescence, to birth and reincarnation. In doing so, they leave us with this observation in parting:

All our lives we love illusion, neatly caught between confusion/
And the need to know we are alive.

I’m grateful that their art, conceived and nurtured in such an inventive and unfiltered form, does exactly that for me. 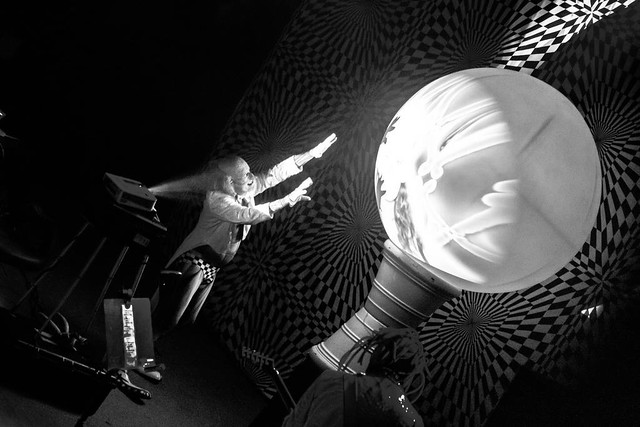