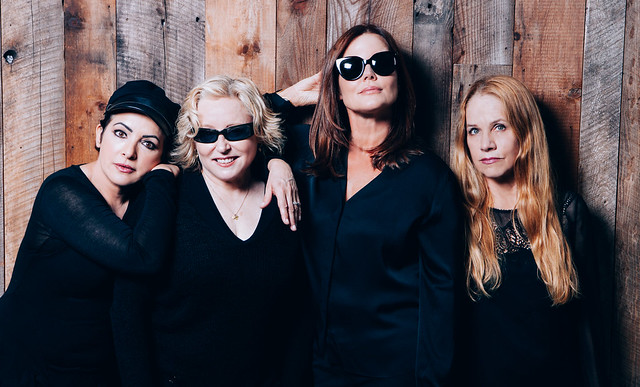 It was 1996. I had recently relocted to DC, and I was digging through the stacks of discs at CDepot in College Park, Md., for a specific prize. I heard The Go-Go’s had released a new single in the previous years when I was at sea, and I was determined to add it to my collection.

The Go-Go’s! Isolated from commercial radio for a bit in the early to mid-’90s, I had missed out on the introduction of Britpop to US shores, and I previously hadn’t found many personal favorites among grunge musicians. But with the five ladies from Los Angeles, I knew I would find fantastic new wave tunes to reignite my collecting passions.

And I found the single — “The Whole World Lost Its Head” — and even better a compilation that inspired its release, Return to the Valley of The Go-Go’s, a 1994 double-disc collection of hits, demos, and live performances. This find stoked the fires of my music-buying binges once again, and I would continue on to amass a collection of which I’m rather proud today.

Join me in revisiting the official music video for “The Whole World Lost Its Head,” that welcome return to form by The Go-Go’s from 1994:

For some years in the ’90s, The Go-Go’s found success as a touring act, prompting the release of a long-awaited fourth studio album, God Bless The Go-Go’s, in 2001. I loved it. It was whip-smart, sassy, and catchy. But it didn’t catch on the way the ladies hoped. Although they still continued to tour occasionally, 2001 was probably their biggest year of this century with the studio album and a very great live video, Live at Central Park. I saw them when they came around to the 9:30 Club that year, of course.

The Go-Go’s frontwoman Belinda Carlisle has remained quite active in the interim, but now it seems The Go-Go’s as a band are finally calling it a day. They initially looked at doing a farewell tour in 2010, but they delayed it after the lovely Jane Wiedlin suffered an injury. Here and now in 2016, that farewell tour is back on. It’s time to say good-bye to The Go-Go’s.

And so four of the original five members will hit the Warner Theatre on Friday, August 5 as part of The Go-Go’s Farewell Tour. Belinda and Jane are joined of course by guitarist Charlotte Caffey and drummer Gina Schock (who originally hails from Baltimore!). Gone is bassist Kathy Valentine, who left the group due to irreconcilable differences in 2013.

The Go-Go’s are bringing some big talent along with them on this tour, including Kaya Stewart, pop daughter of Dave Stewart of the Eurythmics, and Best Coast, the Los Angeles jangle pop duo of Bethany Cosentino and Bobb Bruno.

The Go-Go’s may be saying good-bye, but they are going to go out with a party, and they will leave behind some memorable music that withstands the test of time — buoyant, playful, punky, and simply sensation songs like “We Got the Beat,” “Vacation,” “Head Over Heals,” “Cool Jerk,” and others. I love The Go-Go’s, and I hope you’ll join me at their DC farewell show.

Watch the official music video for “We Got the Beat,” which hit #2 on the Billboard charts for The Go-Go’s in 1981.

Some tickets are still available online!