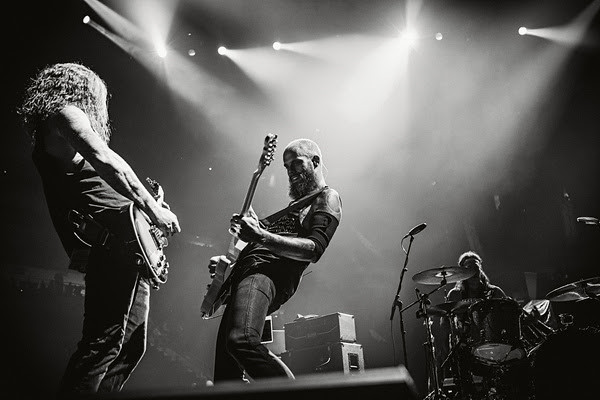 Enter Sebastian Thomson, member of the local rock band Trans Am, and jazz-bassist Nick Jost. The newly formed quartet hit the road in April of 2013.

Purple is the first album written with the band’s new lineup and was received with critical acclaim, making Rolling Stones’s “Best Metal Album’s of 2015”, coming in at number 7. It is not hard to see why it was so well received. This band is a group of four individuals who are masters of their craft. A quick listen to their album will show you how talented they are, but I did not fully appreciate their talent until Friday night.

On Friday night, Baronness kicked off a tour in support of Purple with a bang at the Howard Theatre. The tour will see them travel throughout the country until the end of September, with a few additional shows throughout the year.

The night began with an opening act from Pallbearer, a doom metal band from Arkansas, and transitioned into an energetic and passionate performance from the headliner. It was a relatively early show, a fact that did not go unmentioned by the spectators throughout the night. That, however, did not change the enthusiasm of Baroness, lead by frontman John Baizley.

While John is the lead singer and one of the band’s two guitarists, each member brings a lot to the table. Baroness is by no means a one-man show. The band consists of drummer Sebastian Thomson, guitarist and vocalist Peter Adams, bassist/keyboardist Nick Jost, and John. Baroness played mainly from their most recent album, Purple, which came out at the end of last year.

Listen to some of the new songs from Baroness, starting with “Morningstar” from Purple, on Soundcloud:

Nick is hands-down one of the best bass players I have ever heard. Sebastian’s drumming is a treat for the ears. Peter’s enthusiasm and ability on guitar is old-school and just awesome. And John is not just the frontman by definition, he is clearly the leader. His emotion and energy pours out on stage and you can see how much he loves what he does. One can only imagine the thoughts and feelings that come as a result of surviving such a terrifying accident.

But one thing that stood out to me was the band’s chemistry and how much fun they seemed to be having. John humorously asked the crowd to not call out the name of a song they wanted to hear because “either we’ll play it, or we won’t.” He also referred to the inevitable encore as when they would “fake leave the stage.” It’s always refreshing to see established bands that don’t take themselves too seriously.

Overall, it was an enjoyable evening. The show was certainly not sold out; it wasn’t even packed. I am not sure if this was due to the “early” start of the show or something else, but I can say that I was glad to be there. The Howard Theatre is a great place to take in a show. The crowd seemed somewhat subdued, but there is certainly a passionate following for this band.

The band thanked the long-time fans, but also made a point to thank those that were there seeing them for the first time. “Not sure what we did to deserve this,” John Baizley said at one point, grateful for his audience. Being there Friday night, it was clear to me what they did to deserve it.