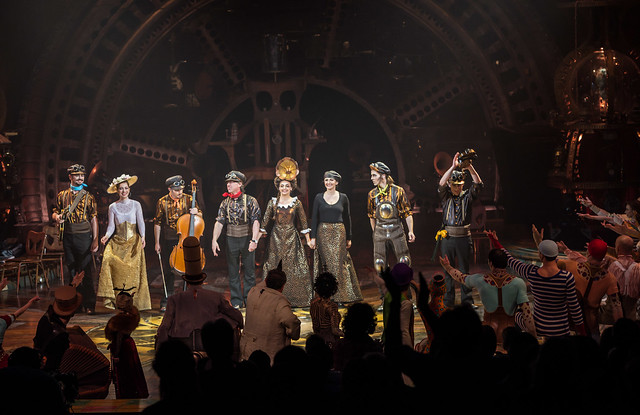 A Seeker, a scientist who invents a machine to travel dimensions, encounters various magnificent creatures on a journey across space, introducing him to wonders that surprise him.

Those encounters unfold as magnificently choreographed scenes across 13 acts, which mix unparalleled acrobatics with cheeky comedy and leave you gaping at in wonder at the gymnastics possible by highly trained athletes in KURIOS, Cabinet des Curiosities, by Cirque du Soleil at Tyson’s Corner in McLean, Virginia, through Sept. 18.

Let me take a moment to impress upon you that this show will truly amaze. But let me first set a crucial element of the scene for you: the music.

KURIOS comes with a dynamic score built on electro-swing with elements of jazz. The original score was created by Raphaël Beau in collaboration with Guy Dubuc and Marc Lessard (known as Bob and Bill). It’s available for sale or to stream on Spotify.

During KURIOS, a live band featuring vocalist Eirini Tornesaki strikes absolutely the right note of mystery and adventure. It’s so infectious from the start, but the band remains mostly hidden during the first half of the show. During the second half, they emerge from the shadows, launching the latter proceedings with a live song performance then retreating to a stage in the rear. From this point forward, Eirini reemerges on occasion to continue to sing as acrobats perform the impossible before our eyes.

And impossible unfolds in the form of skilled acrobats who perform remarkable feats of balance and precise landings the likes of which must make NASA jealous. The last act, subtitled Banquine, consists of 13 artists performing synchronized acrobatics that simply defy expectation. The acrobats literally leap from shoulder to shoulder, somersaulting into position as they stack themselves three or four persons high upon one another. That a person is capable of such a thing without CGI movie magic is one thing; to see a human being leap backwards up onto the shoulders of another man as if he were made of rubber is quite another! 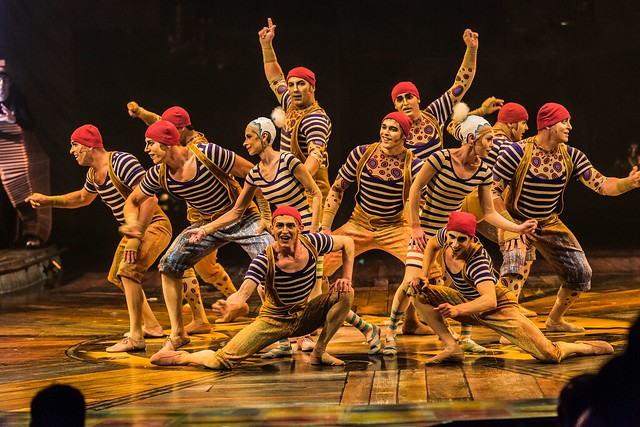 A personal favorite sequence for me occurs earlier in the show in an act known as Rola Bola. Here, we see a fanciful scene as an Aviator flies in on a plane carrying his lady. The dashing Aviator is forced to land his plane, safely, whereupon he challenges himself to various achievements of tremendous balance, stacking various objects, including squares and cylinders, atop each other and then perching on top of them! And he does such things again after taking renewed flight. 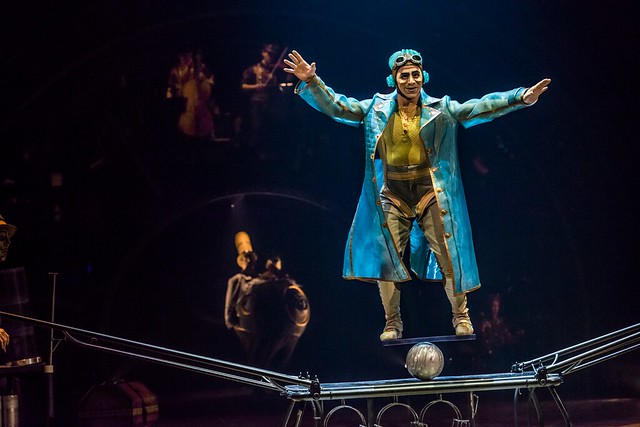 The acrobats occasionally receive a surely welcome reprieve by a clown that I’ll call the Ringmaster, who inserts himself into various acts with an Invisible Circus or a Comic Act (where he attempts to woo a lady from the audience). The results from our Ringmaster are unexpected and hilarious every time, and add a welcome dose of down-to-earth hijinks to an otherwise otherworldly display.

Whether band or aviator or acrobats or clown, the sights and sounds of KURIOS manage to consistently maintain its steam-punk atmosphere, placing the audience in a nebulous imaginary world hinged on the space of the 1890s Victorian era.

Here again, I’ll close with an ode to the magnificent band and share the Spotify tracking of the soundtrack album for your enjoyment. This music goes a long way to establishing the atmosphere, one that is full of amazements and surprises, and well worth a visit of nearly 2.5 hours of your time under the big top.