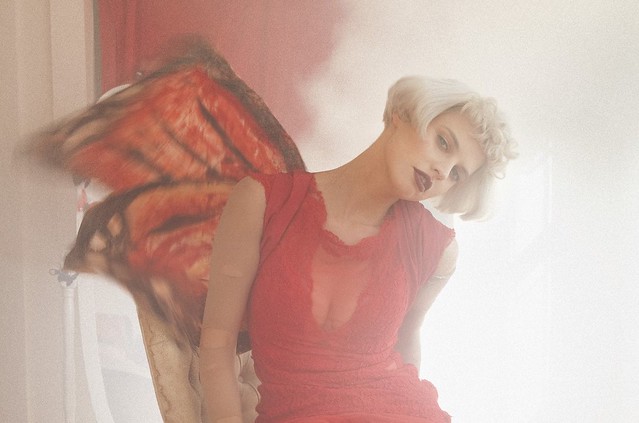 The general vibe of the music being presented tonight is effectively captured by the opening of the song “I Hate You,” which really sounds like the mumbled protestations of someone being roused from a deep sleep. The clarity and focus kick in almost immediately, however, as if the author is suddenly aware of the bitter thoughts that made it so hard for her to fall asleep the night before.

As I listen to Ruby and her band progress through her songs, the most immediate comparison that comes to me is Aimee Mann and the band ‘Til Tuesday. This may be an obvious comparison, being somewhat aesthetically motivated by Ruby’s look, but it is also meant as high praise. Other comparisons include Tinita Tikarum, Imogen Heap, Saint Ettiene, and a tiny little echo of The Blue Nile.

Listen to and buy the album Divorce Party by Ruby the Rabbitfoot on Bandcamp:

The instrumentation for the show is simple but effective. Ruby underscores her vocals with electronic keyboard (her piano solo on “Beach Flowers” is especially effective). She also has a backup vocalist, another keyboardist, and a bass player. The group’s drummer melds together electronically triggered sounds seamlessly with the drum tracks, and offers up some complex patterns in a way that is nevertheless fresh and uncluttered. All the instrumentation wisely serves the songs, and provides a surprisingly lush accompaniment to Ruby’s singing in spite of its simplicity. Her keyboardist alternately plays a bowed upright bass for some of the songs, thickening the sonic brew of selections like “Wild Cherry Chapstick.”

Later in the set, sax player joins the band for their rendition of “Ancil,” creating a nice interplay with the keyboard parts on the song that at times almost elicited the timbre of a bluegrass fiddle. The skip-a-long rhythm of this song actually made me think of Laurie Anderson’s “Sharky’s Day.” But the standout from the set has to be “Nicola La,” a wonderfully flirtatious song that suggests a beguiling vulnerability on behalf of the singer. I suspect that anyone with a healthy romantic drive would be just plain thrilled to think that this lyrical kiss was being blown in their direction.

As Ruby’s set draws to a conclusion, she offers a smartly subdued cover of Shania Twain’s “Still The One,” and closes with “Beach Flowers.” The latter would be a very nice starting point for listeners curious about the nature of her sound.

Most of the songs in the set were from Ruby’s latest album, “Divorce Party,” although she did jump back to their 2014 album release “New As Dew” for the song “Ways.” The farther back into their catalog one goes, the more one can draw parallels to artists like Feist and The Sundays. The folky nature of her early works are not lost in the pop savvy production of her latest offerings, and the contrast is even less apparent in the live performance. Having said that, there is definite evidence of a progression in her work that will better serve to distinguish her from her contemporaries if she continues in this direction.

The band got a good reception from the 9:30 crowd. No doubt many in attendance were eager to see Of Montreal, but Ruby definitely had a large contingent of her own. Evidence of this was the fan who shouted out “I believe in you” between songs, for which the singer was quite gracious in her appreciation. The band’s between-song banter was helpful in loosening up their stage presence at those times when the careful execution of the songs might have come off as a little stiff.