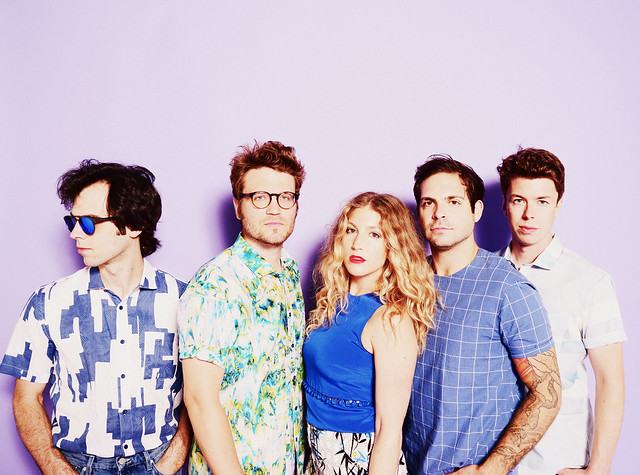 Three consecutive nights at the 9:30 Club? Who wouldn’t love such an opportunity?

Ra Ra Riot opened for all three of the sold out Young the Giant shows (9/12-9/14). I was able to catch the second show on Tuesday, September 13th.

And Wes Miles, lead singer of Ra Ra Riot, seemed to agree about playing at the 9:30 Club, “Amazing to be here for the 2nd night in a row! The best venue in the world!”

Touring in support of their fourth album, Need Your Light, Ra Ra Riot played a 13-song set, six from the new album and then a mix from their previous three albums.

From the new songs they played for the expectant 9:30 Club crowd, “Foreign Lovers” was bouncy and eager, while “Absolutely” is so optimistic and catchy, you could barely stop singing along long after it was over.

Ra Ra Riot formed in 2006 and are from Syracuse, New York. Besides Wes on vocals, the band includes Mathieu Santos (bass), Milo Bonacci (guitar), Rebecca Zeller (violin) and Kenny Bernard (drums). There was also someone playing a cello (or the double bass?).

The new single, “Water”, takes you on journey to free oneself from the chains that bind us. From their older material, “Beta Love” is a dancy, synth-pop ditty that most people found their rhythm to, while “Can You Tell”, from their first album, made good use of the violin as Wes pleads for the love he keenly feels to be redeemed.

Indeed many of the songs were especially energized by the inclusion of the violin played by Rebecca (with wind blowing through her hair for effect) and the cello.

They closed their set with another new song, “I Need Your Light”, which is a plaintive love song that builds and builds to an epic climax that is both fitting for the song, and for the show.

One thing I will note about Young the Giant’s set, they played their new album, Home of the Strange, from start to finish. As lead singer Sameer Gadhia declared, this was the first time they had ever done that. Probably as a way to mix it up over three shows. They did play a few of their bigger hits during the encore.

Setlist
??
Binary Mind
Every Time I’m Ready to Hug(?)
Foreign Lovers
Bouncy Castle
Beta Love
Each Year
Can You Tell
Boy
Dance With Me
Water
Absolutely
I Need Your Light