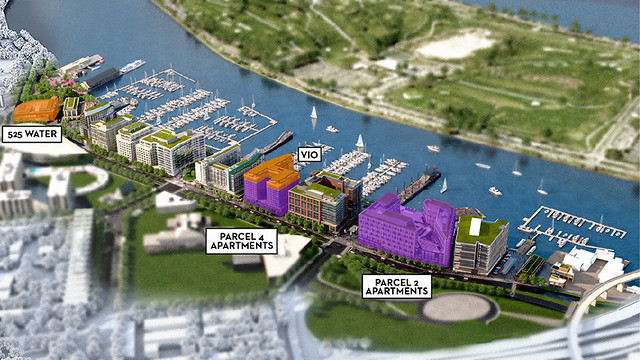 Under construction currently as part of the renovation of The Wharf in Southwest DC, The Anthem, with a price tag of $60 million, is part of the ongoing redevelopment effort by PN Hoffman and Madison Marquette along the Waterfront.

As a production company, IMP currently books concert tours for partner sites outside of 9:30 Club, including the Lincoln Theatre, with a capacity of 1,225, and Echostage, at roughly 6,000, within DC city limits. Although IMP has made no statement regarding those relationships, Parklife DC anticipates the company would wind down booking operations for those venues in favor of The Anthem.

Less likely but also possible is that IMP could wind down band booking for partner U Street Music Hall, with a capacity at about 500, in favor of keeping both 9:30 Club and The Anthem busy. And it seems to us all but certain that IMP will book even fewer shows into DAR Constitution Hall, with a capacity of 3,702, than even now.

The Anthem’s general manager is Dori Armor, who “spent 30 years in the music industry as an agent, artist manager, venue manager, programmer, presenter, and producer with The Touring Artists Group, The Baltimore Symphony Orchestra, The Mann Center for the Performing Arts, Broadway Across America, and most recently as V.P. of Artists and Touring at IMG Artists,” said IMP.

Melanie Cantwell, IMP talent buyer for the 9:30 Club and the Lincoln Theatre, will book The Anthem.

Located very close to the northern-most edge of The Wharf, The Anthem will have an address near 1100 Maine Ave. SW, Washington, D.C. 20024, placing it roughly three-quarters of a mile walk from either the Smithsonian or Waterfront Metro Stations. For more information, stay tuned to The Anthem’s website at http://www.theanthemdc.com (which is currently a placeholder website)! Further speculation on our part: IMP perhaps has reserved the Twitter handle @TheAnthemDC.

The Wharf overall is a $2 billion, mixed-use waterfront development located on the Washington Channel, located adjacent to the National Mall and encompassing one mile across 24 acres of land and 50 acres of water from the Municipal Fish Market to Fort McNair.

Phase 1 of the entire redevelopment of The Wharf also will open to the public on Oct. 12. For more information, visit http://www.wharfdc.com.

Here’s a map of The Anthem’s location, courtesy of IMP. 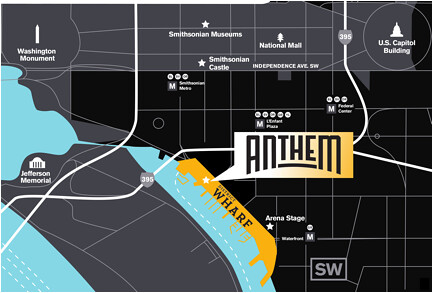