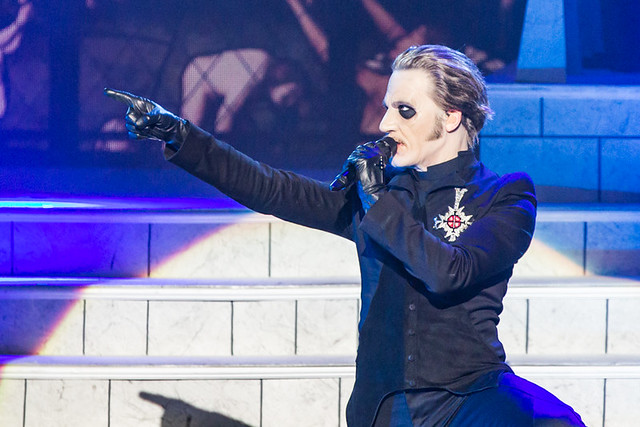 Tobias Forge fronts Ghost at the Warner Theatre on May 20, 2018. (Photo by Paivi)

At one point in the show, Tobias Forge, vocalist for Swedish heavy metal band Ghost, conducted one of many costume changes into a tuxedo and returned to rapturous applause. Well, he initially returned a bit unnoticed with the din of doom metal upon the stage, but he cheekily demanded and received a re-entrance, where the audience gave him his due.

“You caught me completely off-guard!” Tobias exclaimed in mock surprise during the sold-out show at Warner Theatre on Sunday.

It may have taken a lawsuit to reveal his identity, but Tobias sure likes to strut his stuff now that he’s out there. And strut his stuff he did with a septet of “Nameless Ghouls” during a long and winding performance by Ghost.

During the concert, Ghost performed many songs from their upcoming album Prequelle, due for release via Loma Vista on June 1. It’s the fourth album by Ghost, and the first with a new set of Ghouls after the previous Ghouls sued Tobias over profits.

Songs like “Ashes” and “Rats” from the new album proved clamorous affairs where Tobias appeared with slicked-back hair and heavy eye make-up. The songs gave the audience punchy singalong opportunities in which they indulged with enthusiastic cheers. Tobias himself sang with a powerful, flawless tenor. In his stage persona as a “Master of Ceremonies” during these songs, Tobias cut a much more interesting figure than did his alternate persona of Cardinal Copia, a sendup of religious figures that sang several of the songs in the second act.

As much as the audience liked the new songs, everyone was absolutely mad for “Square Hammer,” which ended the second set (yes, there was an intermission, very European). “Square Hammer” received quite a bit of airplay on DC commercial radio, having hit #1 on the Billboard Mainstream Rock chart in January 2017. Ghost was the first Swedish band to take that #1 spot, and the song that did it is a soaring rock anthem. Tobias sang its chorus in perfect inflection as if he seized his voice from a mid-‘80s hair metal band: “Are you ready to swear right here, right now/ Before the devil/ That you’re on the square/ That you’re on the level.”

Tobias took an opportunity to transform himself every few songs, making sartorial changes to augment the mood of his music. While he sang songs like “Square Hammer” in an immaculate English accent, he spoke playfully in an undisguised Swedish accent between songs, where tails served him well. And he lent his Swedish cadence and its inflections to some of the more interesting numbers, for my money.

Toward the end of the first act, for example, Tobias sang “Jigolo Har Megiddo” from Ghost’s second full-length album, Infestissumam. The song serves as an introduction from a character who apparently is the child of the devil, but Tobias sang it in such an easygoing and conversational manner that you could be forgiven if you were to mistake it for an introduction to your friendly next-door neighbor.

Immediately after, Ghost performed “Pro Memoria,” one of the most fascinating songs from the upcoming new album. With the song, Ghost have recorded a sweeping, cautionary ballad, intoning “Don’t you forget about dying/ Don’t you forget about your friend death.” On songs like this, Ghost revealed a side of their music that squarely smacked of early progressive rock, with all of its earnest interest in naturalism and mysticism.

Nearing the end of the concert, Ghost covered “If You Have Ghosts” by Roky Erickson, changing direction again in surprising ways. While you might think the selection of the song — which Ghost recorded for a 2013 EP — a simple matter of wordplay, Tobias demonstrated reverence and affection for the number and its author, underscoring his deep range and mix of influences.

During the Roky Erickson song, Tobias introduced his band — three guitarists, a bassist, a drummer, and two keyboardists. He humorously gave each of the seven masked players a lengthy tribute before calling for the audience to “give it up for… Ghoul!” Well, except for the keyboardists, who as women were interested as the Ghoulettes.

While the identities of the current band may remain a mystery, rest assured they and Tobias were nothing if not entertaining. Still, Ghost were at their best when they leaned on their impressive musical chops and less on shtick. Tobias himself was way more engaging as a Cabaretesque Master of Ceremonies than as a faux cardinal mocking the extravagance of Catholicism.

Here are some pictures of Ghost performing at Warner Theatre on May 20, 2018. All photos copyright and courtesy of Paivi Salonen. 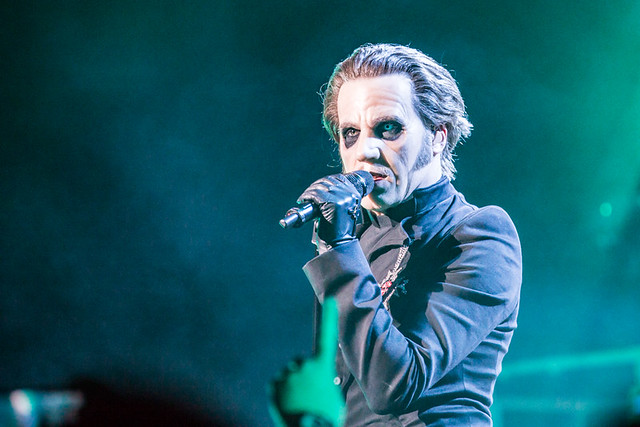 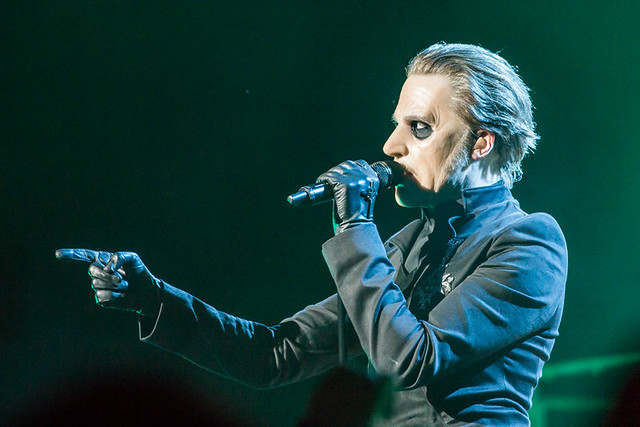 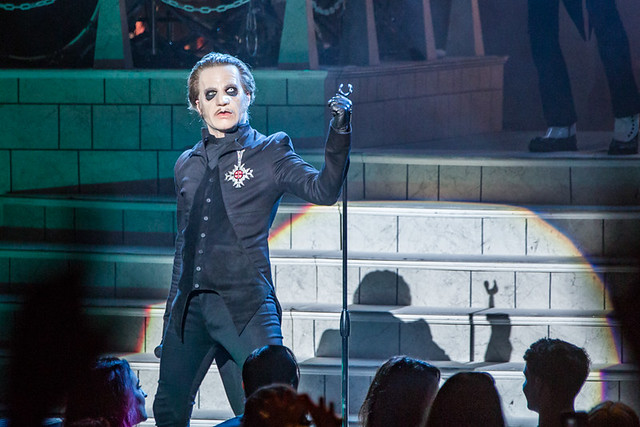 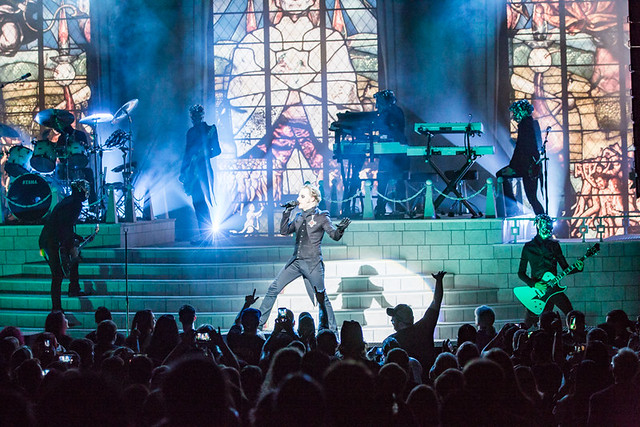 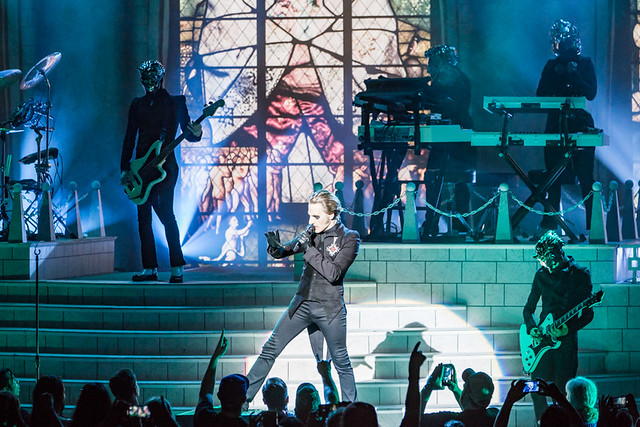 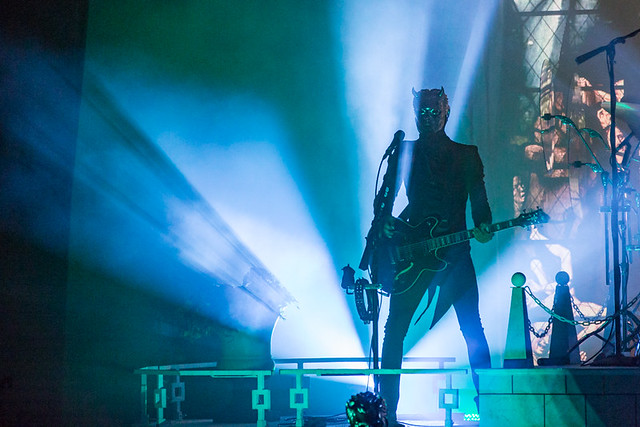 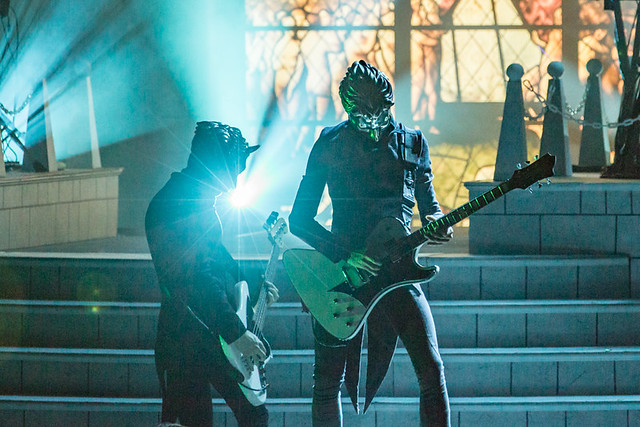 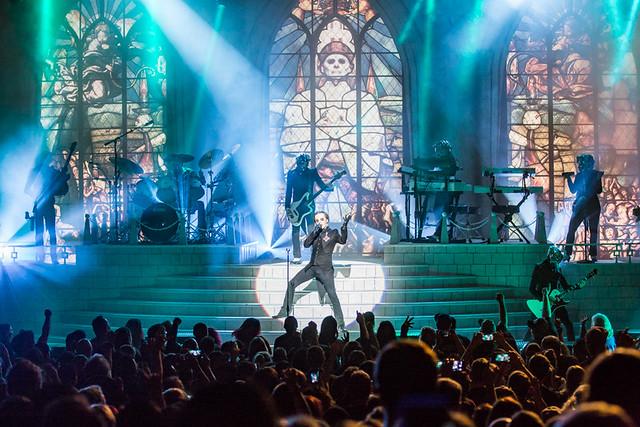 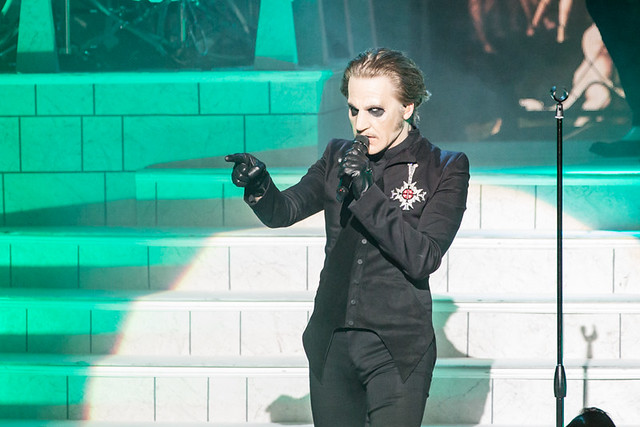 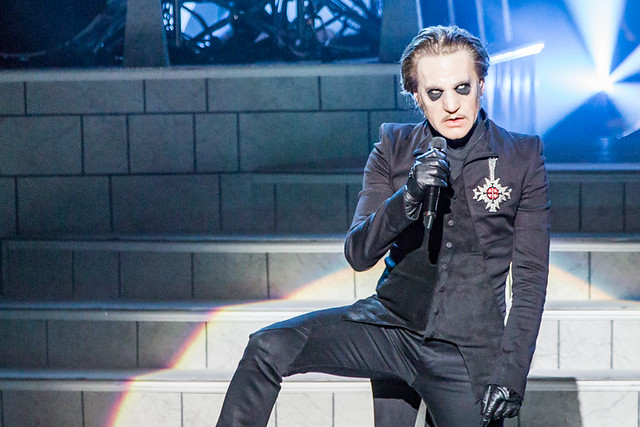 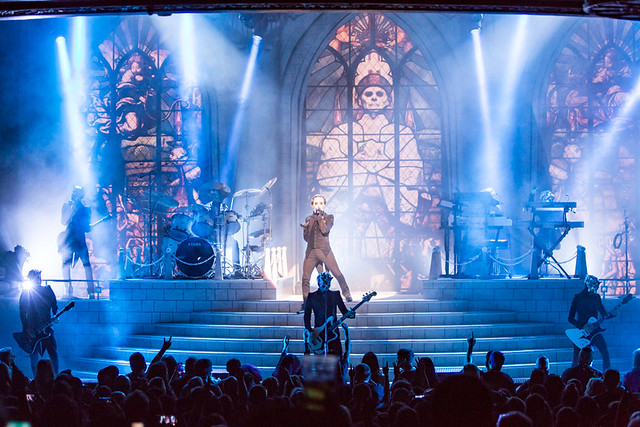 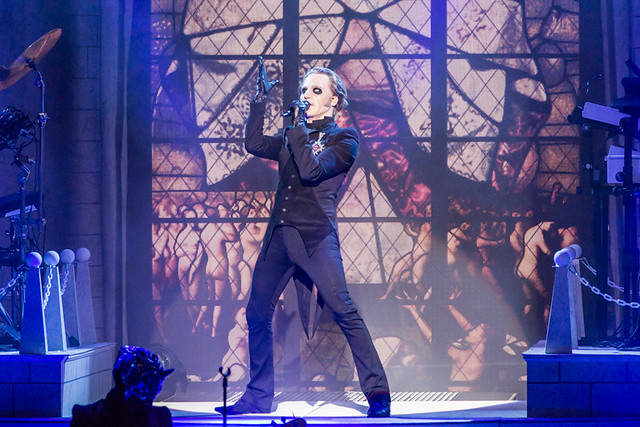 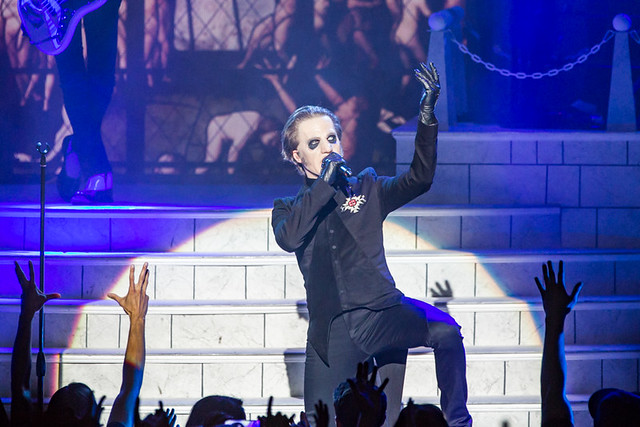 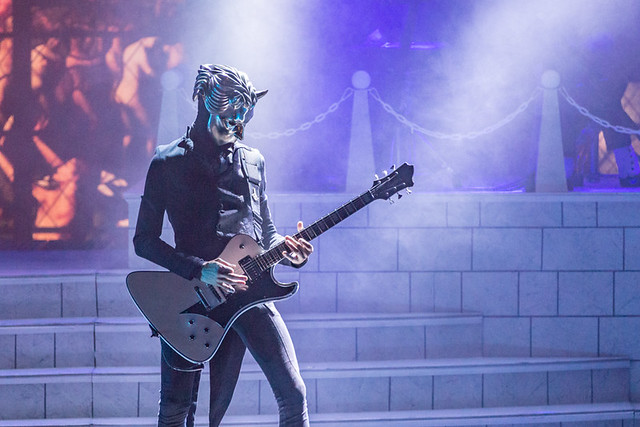 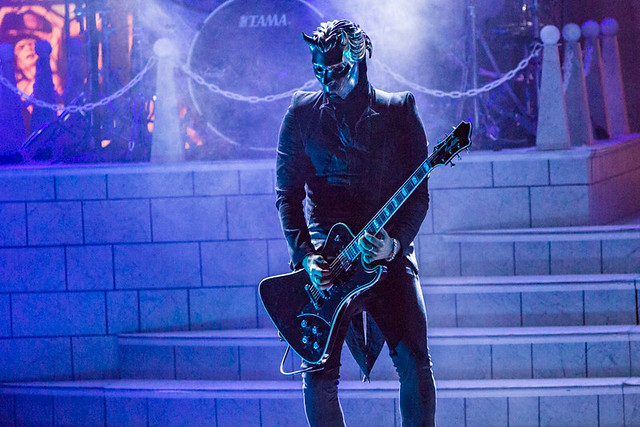 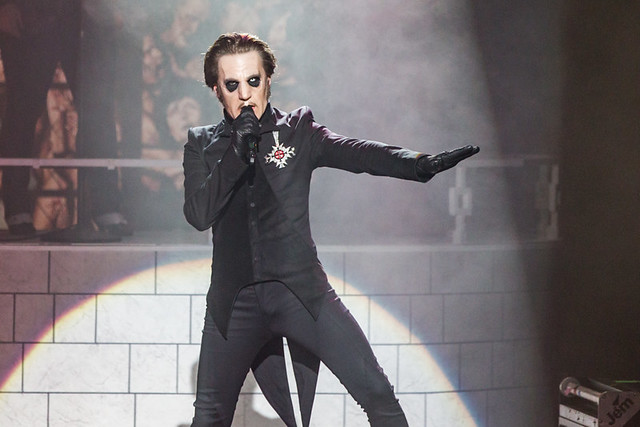 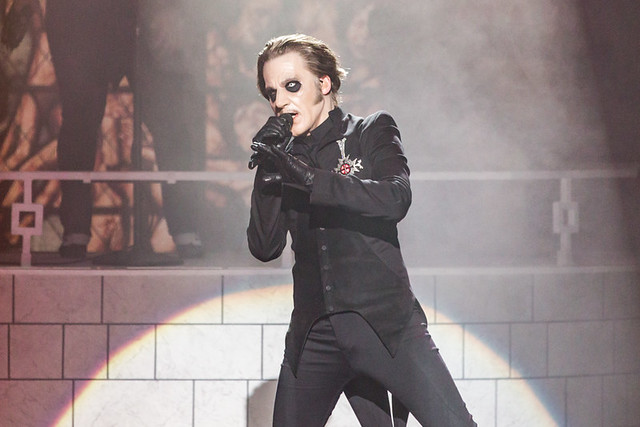 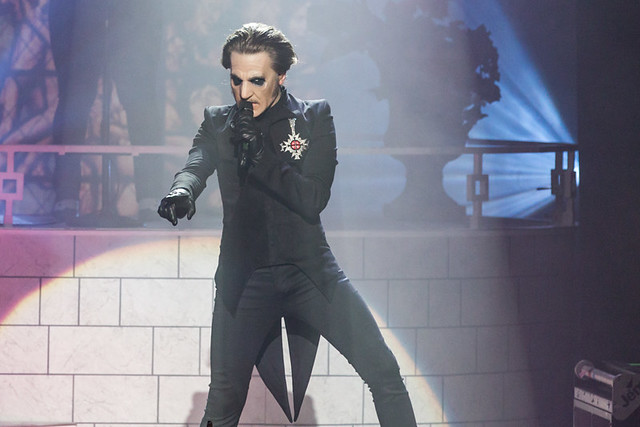 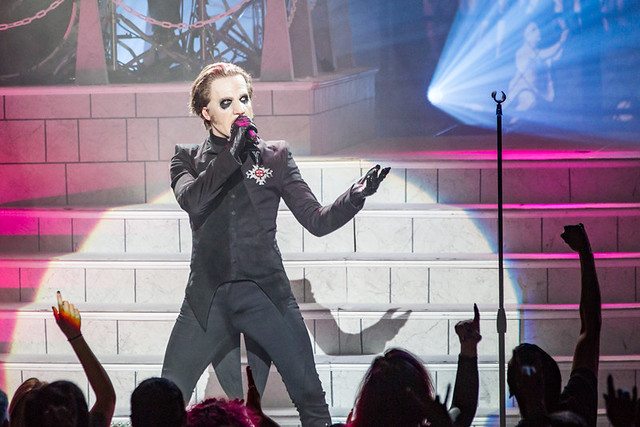 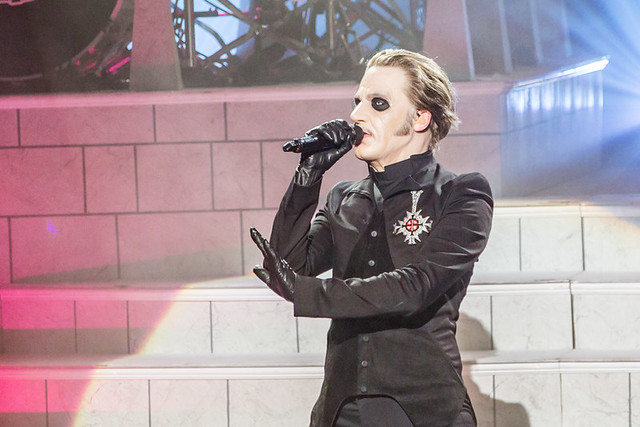 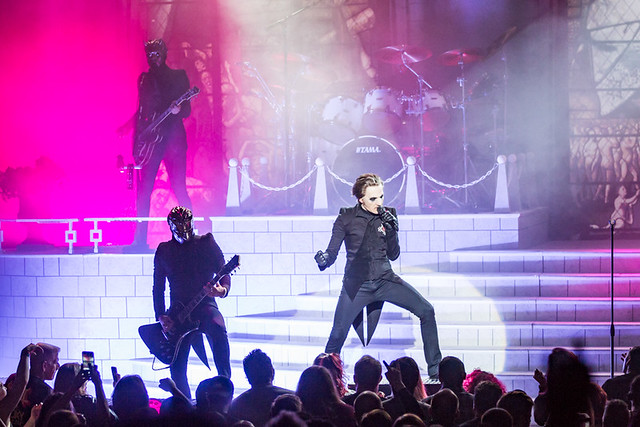 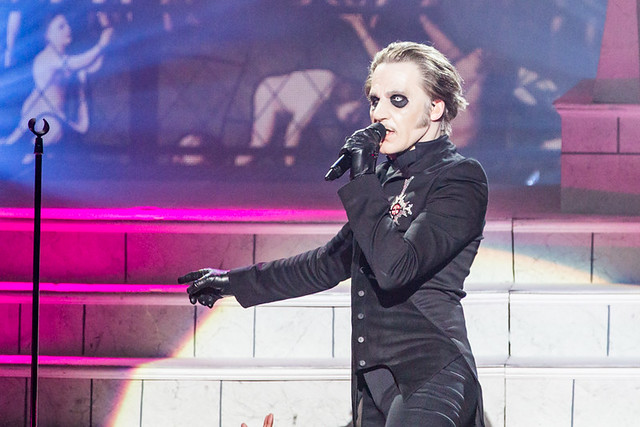