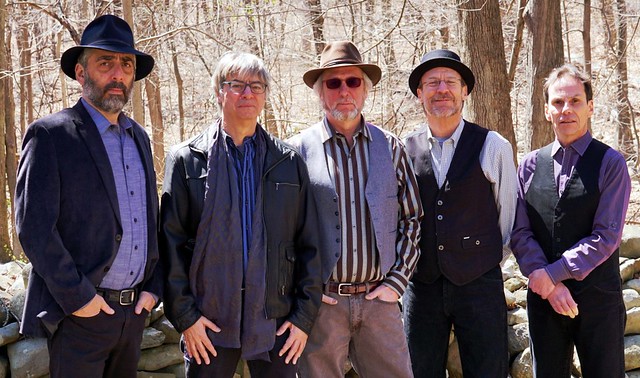 The The Band Band (Photo by Val Green)

Should you form a tribute to The Band, and you want the world to know it, you may well call your act The ‘The Band’ Band. And that’s exactly what five rockin’ gents did. You can see The The Band Band play the songs of The Band at City Winery on Saturday, June 2.

Watch The THE BAND Band perform “The Night They Drove Old Dixie Down” live at the Bearsville Theater, Woodstock, New York, on July 5, 2014, on YouTube

Jack and Gary thought up a tribute act to The Band in 2007, recruited their talented bandmates, and hit the road the following year. It was surely destiny, as 19-year-old Gary witnessed The Last Waltz at San Francisco’s Winterland Arena on Thanksgiving Day in 1976, and he surely dreamt of what he saw ever since.

“We’re somewhat unique, as tribute bands go, because practically nobody else is covering The Band. We want to preserve the authenticity of their sound, their arrangements, and most importantly, the spirit of their live shows. We don’t play our versions of their songs, we play their versions. We use the same instrumentation they used — not just guitar, bass, drums, and keyboards, but accordion, mandolin, fiddle, even tuba. Musically, it’s both challenging and gratifying to us, and the response of our audiences has been better than we could have dreamed. Clearly, there’s a huge demand for just what we’re doing,” said the group in a statement.

See for yourself just what they are doing! Buy your tickets online.